You are here:
Industry Gadgets News

Over the weekend you might have noticed that Elon Musk, of Tesla fame, launched the Boring Company flamethrower, priced at $500. Yesterday, Musk joked that “the flamethrower is sentient, its safe word is ‘cryptocurrency’ and it comes with a free blockchain”. This garnered a response (via NeoWin) from Randy Pitchford, of Gearbox fame, saying that the Boring flamethrower would be written in to the next Borderlands game. 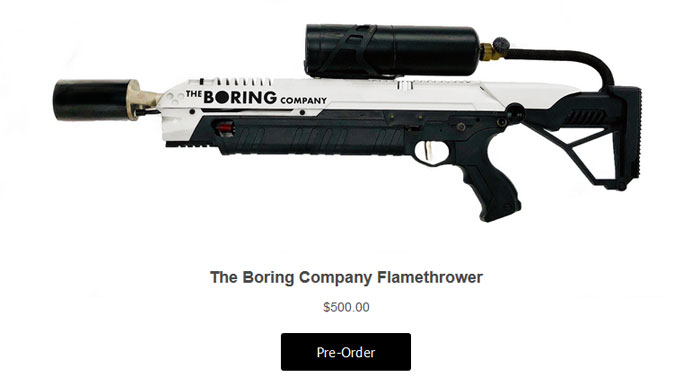 Since Sunday’s announcement, Musk has continued to update Twitter on pre-sales of this flamethrower, with the latest total being 10,000 pre-orders (14 hours ago). There are only 20,000 being readied for the pre-order batch. The Guardian put a figure to the rapid selling success of this flamethrower, reporting that it generated $3.5m (£2.5m) in less than 24 hours. The Boring company is also selling “overpriced” fire extinguishers. 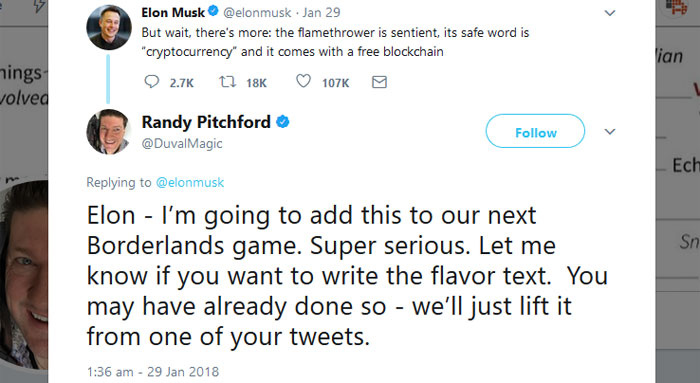 Back to the gaming tie-in, and Borderlands is famous for its incredibly diverse ranges of procedurally generated guns from various mythical manufacturers. I remember that in Borderlands 2 there was at least one gun that was ‘sentient’ or contained some kind of robot brain. Thus a sentient flamethrower with ‘a free blockchain’ sounds very apt for inclusion in what I guess must be Borderlands 3. At the time of writing there is no official schedule for the release of a new Borderlands title.

In related news, flamethrowers with a range under 10ft are legal in the US of A. However, a California legislator wants to prevent sales of the device in that state.

Valve will release Half-Life: Alyx on Monday, 23rd March Need for Speed development to move back to Criterion

CAT-THE-FIFTH
I can see some idiots getting injured with this new “toy”. Also,it looks more like a propane torch.

I think it is essentially a propane torch otherwise it would legally be a weapon in almost every civilised country. I'm pretty sure you're not allowed proper flame throwers in the UK or most of the US.

Personally, I just like the idea of a supersoaker and a match. Far cheaper. You just need to keep the point of ignition far enough away from the nozzle so it doesn't melt. Upside is that if this does get too hot, it'll melt (hopefully), shutting off the petrol supply and saving you an explosion.
Posted by cheesemp - Tue 30 Jan 2018 12:29
I wish I had a license to print money like Elon does… Still got to love the Tesla's…
Posted by Ttaskmaster - Tue 30 Jan 2018 13:13
I'd still rather have an M240 Incinerator: 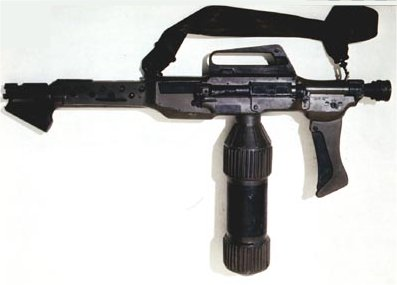 philehidiot
…Personally, I just like the idea of a supersoaker and a match…

As a young (and very silly) teenager I used to enjoy spraying deodorant into an empty 2 or 3 litre plastic bottle, I would then light the top and squeeze the bottle (away from my face) and hey presto, big flames! I stopped doing this when one day a bottle I was using had a small hole in the bottom that I was unaware of, as soon as I lit the top it turned into a Bunsen burner on full power and melted half of my thumb! Ah I can still remember the agony and having to sleep with my thumb in a cup of cold water all night, good times, good times.