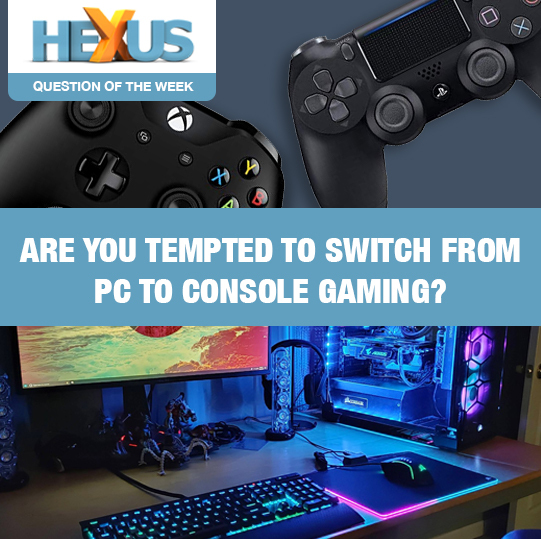 Hands up, with everything that's happening in the world, who has found more time to pour into gaming?

We imagine a fair few, and that makes this a good a time as any to discuss gaming habits, and in particular our platforms of choice. The debate between console and PC has raged for as long as we can remember, but you might argue that this is the year in which the lines will be blurred like never before.

Detailed specifications for the upcoming Xbox Series X and PlayStation 5 have been announced in recent weeks, confirming that both next-generation consoles are effectively full-fledged PCs powered by AMD Zen 2 processors and AMD RDNA 2 graphics.

With that in mind, is there a temptation to turn our attention to the simplicity of a console, or does the alignment of underlying architecture lead you to believe the future of PC gaming is looking increasingly bright? There are pros and cons to both sides of the argument, and with more and more games taking a cross-platform approach, there's opportunity for fans of certain platforms to try new things.

Let's hear your thoughts; are you tempted to switch from PC to console gaming, or vice versa?

Posted by Jonj1611 - Fri 03 Apr 2020 17:02
No..
Posted by QuorTek - Fri 03 Apr 2020 17:12
Nope never, but I am interested in consoles in the way as they will determine alot in what the game standards is going to be like, and that maybe finally being able ot utilize my system proper…
Posted by dylanlaw79 - Fri 03 Apr 2020 17:14
Will never switch from PC gaming, as expensive as it can get. Many more games available and I like being able to mod some. i would like a few of the console exclusives but no matter how many exclusives are released they will many make me switch from my PC
Posted by Iota - Fri 03 Apr 2020 17:28
Well considering XBOX Live services went down today, and Sony isn't perfect, I think I'd rather not consider it. At least all I have to concern myself with is the broadband going down, plenty of different services to choose from that decide what I play.

That's before you even get into the discussion about which is better in terms of hardware etc.
Posted by malculator - Fri 03 Apr 2020 17:28
Too early to say, currently. It depends upon the price and performance of the next generation of GPUs. If they're ridiculously priced compared to the consoles then I'll switch to console gaming and use my PC mainly for browsing and encoding video.