Affordable and mid-range smart device processor specialist MediaTek has announced a pair of new 12nm SoCs aimed at mobile gaming. The new Helio G25 & G35 feature Arm Cortex-A53 octa-core CPUs at up to 2.3GHz and IMG PowerVR GE8320 GPUs at up to 680MHz, plus complementary tech such as the MediaTek HyperEngine "for faster, smoother performance, enhanced power efficiency, and brilliant graphics." MediaTek has also paid attention to demanding smartphone tasks such as premium imaging and high resolution photography. 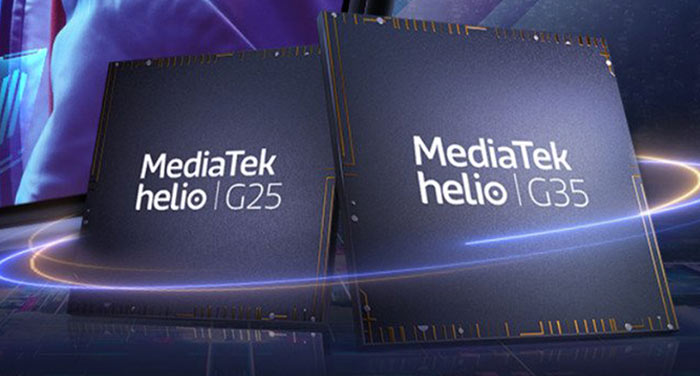 MediaTek describes its HyperEngine as part of the chipset which provides intelligent resource management to make sure your games can benefit from sustained and smooth performance, even in demanding situations. It isn't all about the CPU, GPU, and memory optimisation. HyperEngine can trigger Wi-Fi & LTE concurrency within milliseconds when Wi-Fi signals drop, for example. Furthermore, HyperEngine lets users defer calls, while in a game, for uninterrupted gaming.

The differences between the Helio G25 & G35 gaming chipsets are first manifest in the clock speeds that the CPU and GPU portions of the SoCs can achieve. In the MediaTek Helio G25 the CPU cores max out at 2.0GHz. With the G35 a 2.3GHz boost is attainable. Meanwhile the Helio G25 GPU clocks up to 650MHz, but the G35 can reach 680MHz. Up to 6GB of LPDDR4x is supported by these SoCs, and eMMC 5.1 storage is supported. 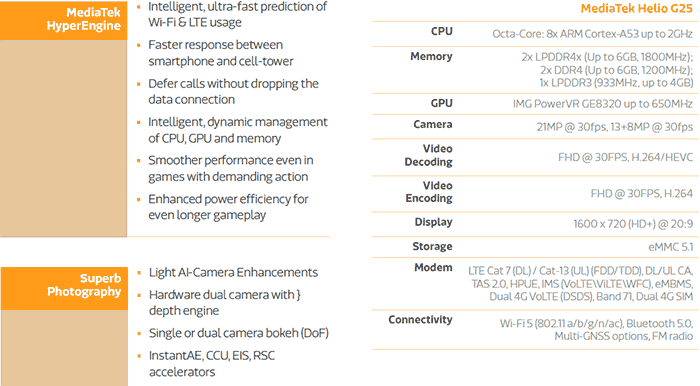 Multi camera module support for the Helio G25 & G35 extends to the inclusion of a hardware depth sensor. The lower-tier Helio G25 can support a single camera mode of up to 21MP at 30fps, while the G35 supports up to 25MP cameras and AI enhanced camera features including simulated bokeh effects. MediaTek has integrated Electronic Image Stabilization (EIS) and Rolling Shutter Compensation (RSC) engines plus AI camera enhancements such as AI beautification, and Smart Photo Album. 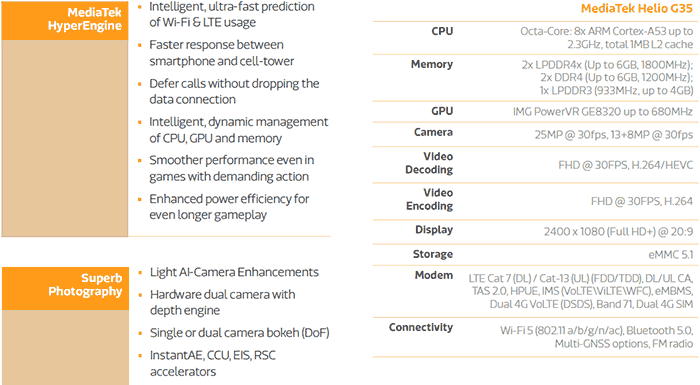 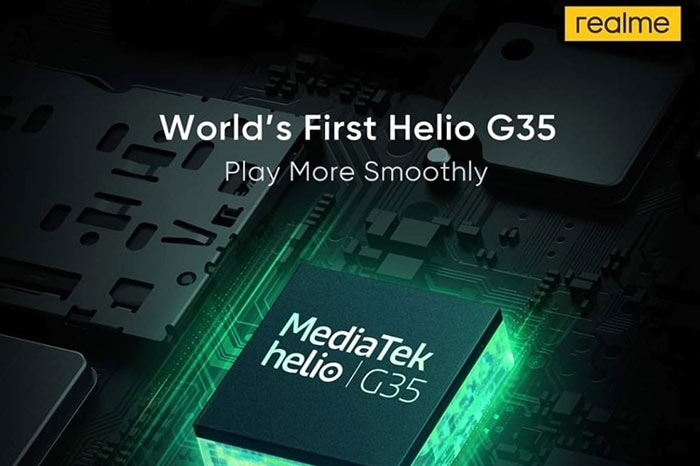 One of the first devices shipping with the Helio G35 is the new Realme C11.

You can read more about the respective chipsets via the links below:

Posted by watercooled - Mon 06 Jul 2020 09:34
Mobile gaming with 8xA53 eh? OK then. I thought we were past this, with many manufacturers now using at least a couple of big cores in their mid-range SoCs.