Planet Computers has launched its Astro Slide 5G Transformer project on IndieGogo. The UK-based firm calls the new device "the first 5G smartphone with a keyboard." This pocketable hybrid is particularly interesting thanks to the 'RockUp' slider hinge design and OS flexibility (Android 10 or Linux). The Astro Slide is currently listed as an IndieGogo project seeking €180,000 of crowdfunded backing. At the time of writing 128 backers have put up nearly €70,000, and there are still 40 days to go.

You might have already heard of Planet Computers if you are a PDA enthusiast. Over the last two years the firm has delivered the Gemini PDA and Cosmo Communicator devices to over ten thousand backers, which is a decent track record. In January 2018, Planet Computers made the HEXUS news pages for winning a CES Innovation Award for its Gemini PDA ultrathin clamshell device with tactile keyboard. 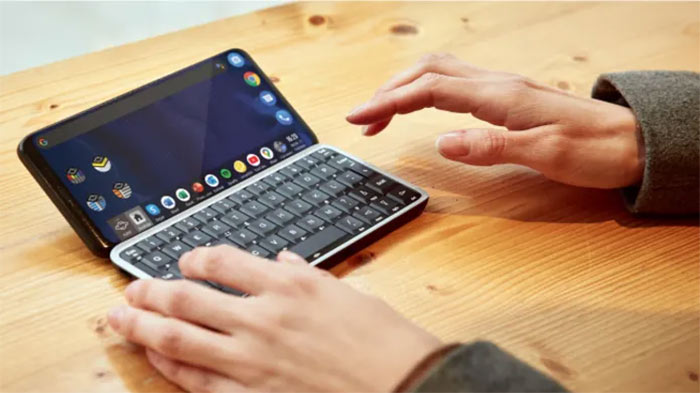 Key specs of the Astro Slide: 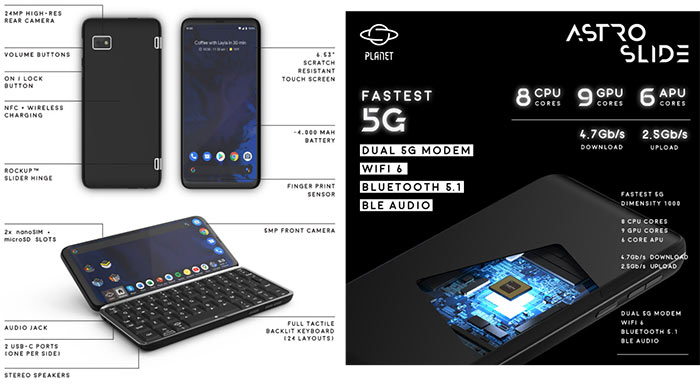 Money raised by the crowdfund project is said to be going into helping bring the Astro Slide to market in a number of ways. Planet Computers has already gone a long way towards the finished product but will use the extra money to push through the final design phases, manufacture all the crowdfunded pre-order devices, and fully develop the Android 10 and Linux boot firmware.

Early bird backers can 'buy' an Astro Slide for £439. This is a limited offer of 500 units, with 123 having been claimed at the time of writing. Shipping is estimated to occur about a year from now - which is a considerable wait but you will be getting a "40 per cent discount" for your faith and patience.

There are some useful changes to this €329 device, like; dual-SIM, NFC, Android One.

6.4-inch smartphone becomes available in the UK in Black, Blue or Red, from 1st June.

One it looks flimsey in the youtube video when it was sliding and I can see it breaking REALLY easily, no stylus (I'd want one at that size) and more importantly, I'm not sure I can see a use for it….

I think from a personal perspective I'd rather have a MS neo type device if I was going down a small productivity device, yes it will likely cost considerably more but I just think it will have more usability long term.
Posted by philehidiot - Mon 30 Mar 2020 15:42
As above, I had the QWERTY sliders, and they were awesome. Being unable to get a decent Android device with a decent keyboard is really frustrating. The problems I see with this are:
1) When I consider the tank-like slider designs on other phones, that looks like it's just going to break.
2) It shows someone holding it in the air and typing with thumbs but I can't imagine this is anywhere near optimal and I suspect you'll end up using onscreen keyboards for the majority of texts and so on. That defeats the object for me. I prefer a keyboard to type including texts and searching on websites, etc. Not just for being sat down at a table and writing essays… If I thought I was going to do that, I'd just pack a small bluetooth keyboard and use a prop up case.
3) Which brings me to “it's too big”. It's huge. Again, if I was wanting to use that, I'd be using a bluetooth keyboard with existing kit like my tablet or phone. Either way you get similar functionality when you need it but without the constant pain of having an oversized phone which is just way too big. The Xperia Pro pictured above was really quite small in comparison to todays phones. The keyboard wasn't designed for writing essays on, just emails and texts.
4) A year is a long time in tech and I suspect this will be looking quite old in a year.

I think this is trying to appeal to a very niche market who are happy to lug around a phone the size of a tablet yet aren't willing to lug around a keyboard. I can see there will be a market, it's just niche.