Samsung is reportedly just a few weeks away from unveiling its next high-end flagship, the Galaxy Note 10. According to people familiar with the plans, speaking to CNet, Samsung will host a special Unpacked event at the Barclays Centre in Brooklyn, New York on 7th August. This is the same venue Samsung used for last year's Note 9 launch. At the time of writing Samsung hasn't even obliquely teased this Unpacked event so it is possible the plans could still change ahead of the date put forward.

The Samsung Galaxy Note line aren't as big sellers as the Galaxy S series but they do have a devoted following and pioneered the large 'phablet' designs that are mainstream today. Still, most large screen competitors don't put as much effort into the 'Note' taking capabilities of their devices as this S Pen packing smartphone. Samsung likely hopes its Note 10 can make a big enough impact to cover up some of the damage to its brand and bottom line caused by the $2000 Galaxy Fold debacle.

If wondering what to expect with the Samsung Galaxy Note 10, one can cast your eyes towards Twitter leaksters like Ice Universe (who has shared quite a lot of Note 10 material recently), OnLeaks, and the Samsung focussed sites like SamMobile. Pondering over these sources you will find strong rumours that there will be two Note 10 devices launched in August; the Galaxy Note 10 and Note 10 Pro. These devices sport 6.3-inch and 6.75-inch displays respectively. Other recent leaks point to the use of a rolled-side-edges Infinity-O display with a single centralised selfie-cam cut-out in both cases. 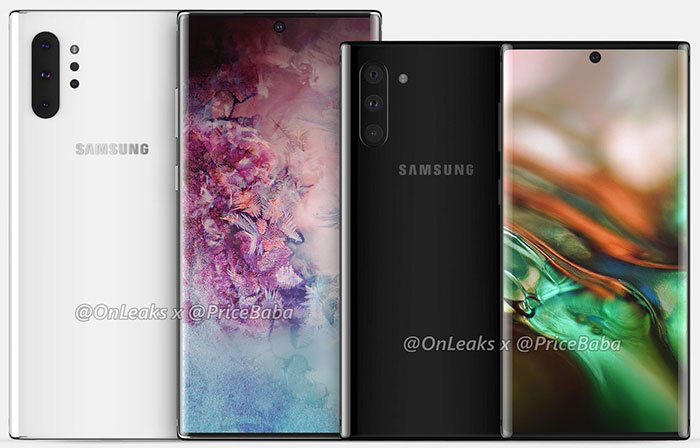 Right now there are quite a few rumours swirling around about whether the Note 10 will be the first in the line to do away with the 3.5mm headphone jack. However, an important improvement after killing off the removable battery functionality (Note 5) is that the newest device may come with a substantial 4,300mAh cell. Other notable rumours are that the S Pen could be equipped with its own camera, the Note 10 could sport four rear cameras, and it might be a buttonless device…

mrochester
Still Android I see. When are we going to get an exciting new OS?

Watch Huawei. Plus why would you want a new OS? There's a reason the mobile OS market boiled down to basically two large ones. WebOS was awesome. Hell, I'm seeing features lifted straight from that making it into new versions of Android. It makes me happy. But it didn't take off and never would. Why? App support was the main issue. If your phones with your new OS don't have a load of market penetration, no one will develop for them. If you're Samsung and you go full steam ahead with a new OS, you'll probably destroy your booming mobile business as, whilst you'll be able to get the big names on board prior to release, the smaller ones, the games, the Kali Linux guide, etc won't be there for months, years, etc. As a result, people will not buy one of your smartphones to reduce their phone's functionality by dropping apps they use a lot. The smart ones will hack your phone and put Android on it, the rest will go to the competition. Even Microsoft couldn't break this market and for Samsung to risk it all from their position would be absolute madness.

As for this phone… I am due a new phone. That said, my S8 is still very good and there are no features which cause me issues. Battery life is the only concern and I can always just replace that for far less of an investment than a new phone. My S8 is hacked to my liking with the right bloatware / speed balance. I'd be loathed to start again given it takes so long to get this right. Also, if they do drop the 3.5mm jack, it's a no go for me. 6.75“ is a no go as I have small hands and I have a 7” tablet. Add a case to that (which you'll need just to be able to hold it properly due to the stupid wrap around screen) and you'll end up with something very well suited to building the foundations of a small church. The hole in the screen is a no go as well. I'm sorry but if I'm watching a video, presentation or whatever, I don't want to have to interpolate in my head what is missing. Take your hole and…. fill it. I'd rather have a notch and the OS put notifications either side but make full screen video avoid it. Or just a piece of non screen that holds various sensors, speakers and so on allowing iris scanning, a decent speaker and so on… *checks S8*. Ah. The only reasons I can see for an S pen camera are for spying on people, a feature for feature's sake and a way to make replacement pens insanely expensive. As for buttonless, don't get me started. I have enough problems trying to figure out if a non press is due to lag or not registering. I want to be able to alter the volume in my pocket by feel, I want to be able to turn the power on and off by feel. They've been down this “no buttons” route with ultrasound scanners and guess what? This last generation they have gone back to buttons and knobs because they are usable without looking, give tactile feedback and you know when you've pressed it so you know when nothing happens it's probably lag and you don't have to keep hammering.

I'm going to stop ranting shortly but this could have been a decent phone. Instead, it's possibly a phone with no buttons, a hole in the screen (for a feature I never use unless I need a mirror because I think I've dribbled) that can't take any of my headphones without an adaptor which will almost certainly ruin the sound quality unless you spend a lot on one with a decent DAC… and then you get annoyed because you lose it or don't have it with you when you need it. Oh and I regularly charge and listen simultaneously. Kinda hard with only one port for both.

However, an important improvement after killing off the removable battery functionality (Note 5) is that the newest device may come with a substantial 4,300mAh cell.

Let me know when they've brought back the removable battery functionality and maybe I'll consider upgrading from my Note 4.
I'm guessing the Note 7 battery debacle would've been cheaper to remedy if they'd been able to ship replacement batteries rather than recall and refund every single device.