NASA has released stunning footage of the Perseverance Rover's final moments of descent and landing on Mars – from chute deployed to touch-down on the surface. The footage mixes video from seven cameras installed on/around the rover and audio from mission control, talking you through the process. The Perseverance Rover landed 5 sols ago.

As the parachute deployed, the module with the rover was about 12km above the surface of Mars and falling at approx 400m/s. A little later (9.5km altitude and at a much reduced 145m/s velocity) the heat shield used by the module to protect it from burning up as it sped through the Mars atmosphere separated so the radar and built-in downward facing cameras could look at the surface of the planet. 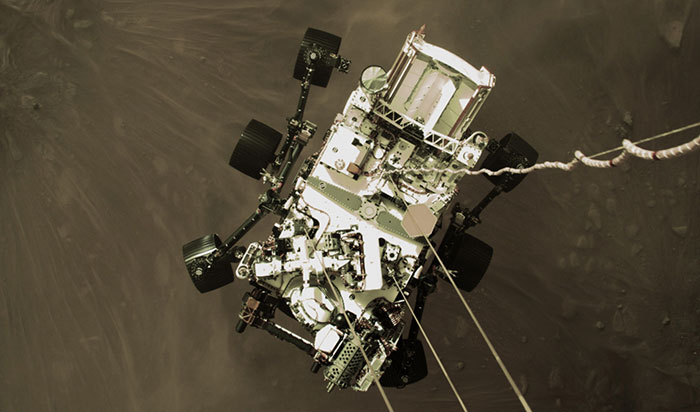 At about 6.6km from the surface, radar had the locked position on the ground and the descent had slowed to about 100m/s. At an altitude of about 4km the onboard computer produced a valid landing solution. Perseverance's landing module backshell with parachute separated at about 2.6km from the surface, so the landing engines came into play, and it was noted that at 300m above the Martian surface the descent speed was 30m/s. A short time after this announcement the 'sand' on the surface of the planet looked like it was seeing blown asunder by the thrust from the landing engines.

The final part of the landing process now began, and it is referred to as the Sky Crane manoeuvre. Perseverance's powered descent module lowered the rover to the surface before detaching and flying away – with the rover safely on the floor of Jezero Crater.

The BBC notes that one of the three upward facing cameras failed and a microphone meant to record the landing sounds didn't work either. However, scientists and tech enthusiasts are going to be pleased with the clear video and photos that are due to come from the rover, and at least one microphone is operational now on the surface. 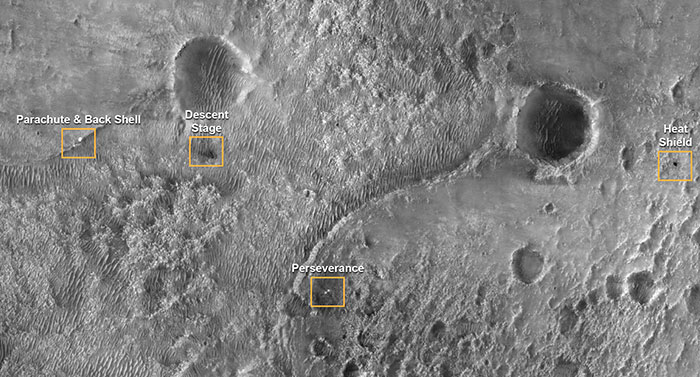 After the landing the commissioning of the rover systems continued. For example, its navigation mast was erected and this features the main rover cameras too. This important period should be completed shortly, before roving begins in earnest with various AV recording and surface material sampling and so on. 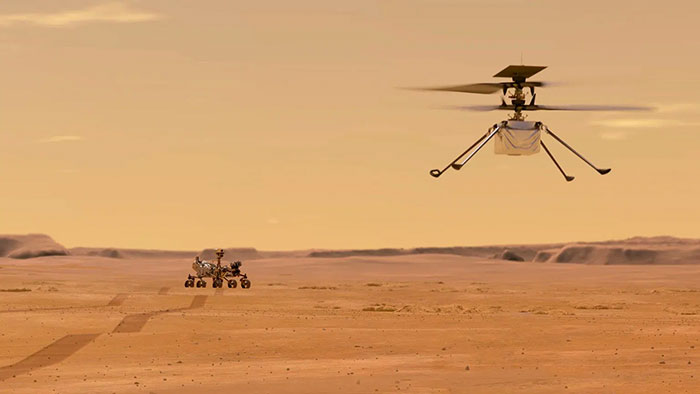 Some are rather excited by a drone called Ingenuity, that is part of the expedition, set to perform the first powered flight on another world sometime in April – once Perseverance has reached a point of interest 2km north-west of the landing. That point is what looks to be the remains of a delta that formed when Jezero was filled by a giant lake billions of years ago. The silt there might contain signs of past microbial activity...

You can check out many photos, videos and mission updates at the official NASA Mars 2020 site.

Posted by Corky34 - Tue 23 Feb 2021 12:28
Always makes me smile when they commentate on a landing that happened like 4 or more minutes ago, it defiantly adds to the moment but it's not like it should be doing anything they're not expecting or that they could even do anything if things didn't go to plan.
Posted by Tabbykatze - Tue 23 Feb 2021 14:43
Same with Opportunity, I would have loved to have been in that discussion meeting on how to get something so heavy onto Mars without kicking up a dust cloud so big it would take a long time to disperse and causes massive issues with the unit….

Department head - “right so if we land something like this on Mars, we'll need this amount of thrust to land safely but those thrusters are too close to the martian surface it'll be a dustbowl rubbishrubbishrubbishrubbishstorm, anyone have any ideas?”

engineer A - “we could do a bouncy ball again?”

Department head - “Yeah, because that worked out so well didn't it, next!”

engineer B - “err, we could make it a giant a helicopter?”

Department head - “Like it, but same dust kick up and the blades would have to be ridiculously huge, anyone else?”

engineer at the back taking a massive drag on a fruity twizzler - “we could make a drone that stops short of the martian surface reducing dust kickup from the thrust then drop the rover using a skyhook…”
Posted by cheesemp - Tue 23 Feb 2021 15:32
Fascinating video but it always gets to me with these videos just how utterly devoid of any features other planets are. The comet landing video recently was similar (although it did at least have some small boulders). I guess in my head (which is filled with way too much TV sci-fi) there should be interesting caves, hills and boulders but they really do just look like large plains of dust covered rocks…

Ha ha, never thought of that link!
Posted by Sam 359 - Sat 27 Feb 2021 16:30
Enthralled by footage like this, I still remember setting time aside to watch Tim Peake on his trip to the ISS.