The Royal Navy's tech team, also known as NavyX, has been busy recently designing and testing drone systems to rescue those unfortunate enough to have roused the cry 'man overboard'.

In testing waters surrounding Horsea Island, off Portsmouth Harbour, the Navy has successfully deployed drones to locate dummies representing floating humans, and successfully dropped test packages at these locations. In the future, the drone could drop something like a life raft or similar inflatable aid, and remain hovering above the lost at sea victim until rescuers arrive. 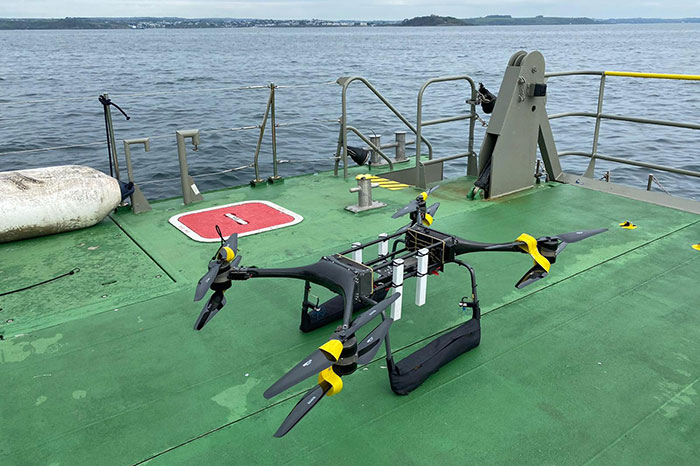 Drones such as the heavy lift Minerva T-150 and Minerva T-80 were used in the trials, which were also backed by Defence Equipment and Support (DE&S) and companies Malloy Aeronautics and Planck Aerosystems. Previously, these same drone models have been used in resupplying the Royal Marines in combat exercises in Norway and Cyprus.

From the Royal Navy blog and video, it isn't entirely clear how much of the drone's work is autonomous and how much is guided by a human operator. Ideally the drone could be on deck at all times listening for a characteristic splash or cry for help, take off, alert helpers, drop a dinghy or similar, perhaps with some other life aids, and hover over the unfortunate person in the waters overboard until rescuers arrive. With the job done, the drone should return to its docking area on the ship. One of the NavyX partners, Planck Aero, is a specialist in autonomy, delivering "enhanced capabilities for surveillance, reconnaissance, real-time situational awareness," so hopefully something along these lines is being worked upon.

Posted by ik9000 - Thu 08 Jul 2021 12:21
let's hope the dev isn't one used to targetting generation Z's wasters, or the thing will just fly around pulsing RGB rainbow effects, find the drowning person, then hover over them while livestreaming it on twitch with the caption “Sink or swim? In at the deep end… Lolz. Donate below to patreon to help save them, or contribute to a gofundme page to help recover and repatriate the body. Subscribe to our onlyfans feed to get 4k and close ups”
Posted by philehidiot - Thu 08 Jul 2021 12:27
There are some really good, wearable man-overboard systems that have trackers on them. I'd say this combined with a drone that hovers, drops a floatation aid and guides the rescue crew would be awesome. An advance would be a tethered floatation aid that is attached to the ship. Potentially you could reel them in closer / prevent them from floating further away and prolonging time in the water.

3dcandy
Finally might get the wife to go on a cruise
;)

don't tell her about norovirus statistics on cruise ships then ;)
Posted by Ttaskmaster - Thu 08 Jul 2021 13:02
Perhaps it's only the bigger ships… but I thought if you went over, it cost so much to turn the ship around and pick you up that the Navy would just leave you there - I recall Tony Scott desperately wanting a certain shot for Top Gun, but the sun was in the wrong direction and the captain on CVN65 couldn't justify the expense of turning the ship… until Tony grabbed his personal cheque book and paid the $25,000 out of his own pocket.

If it's true, a drone simply hovering over you wouldn't do much if there's no rescue coming anyway.