UK communications regulator Ofcom has dropped HEXUS a couple of interesting news releases today, First of all it told us that streaming services have overtaken pay TV here in the UK for the first time. Then, a second bulletin arrived to share the latest stats with regard to pay TV and telecoms complaints, as Ofcom shared new league tables.

In its Media Nations 2018 report, published today, Ofcom says that the rise of online video is changing the picture for the TV industry. Of particular note is the fact that for the first time streaming has overtaken established pay TV. The total number of UK subscriptions to the three most popular online streaming services – Netflix, Amazon Prime and Sky’s Now TV – reached 15.4 million in Q1 2018. That's greater than the 15.1 million tally of broadcast pay TV subscribers. 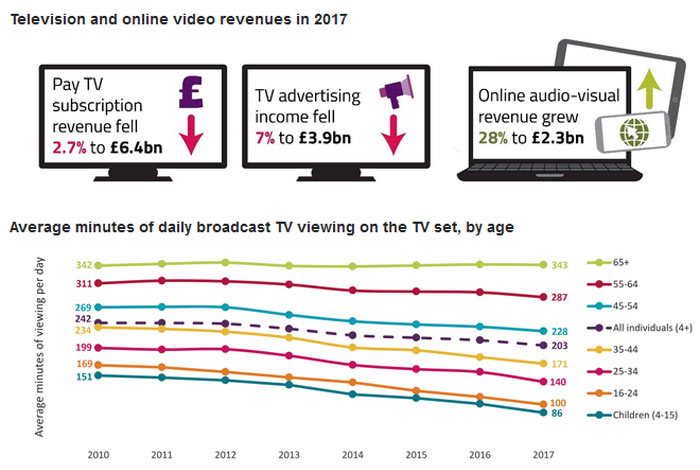 In another blow to the pay TV industry, its revenue has declined for the first time. Subscription revenue generation was down 2.7 per cent last year to £6.4bn. In a related development television advertising income fell by 7 per cent, to £3.9bn. In contrast streaming revenues were up 28 per cent to 2.3bn in 2017.

Public service broadcasters aren't supporting the traditional broadcast team very whole heartedly, as the BBC, ITV Channel 4 and Channel 5's £2.5bn combined network spending on original UK-made programmes in 2017 represented a record low – and was £1bn (28 per cent) less than the 2004 peak of £3.4bn. People are watching PSB less, with the latest average viewing time of 3 hours 22 minutes a day down 4.2 per cent on 2016 figures, or down 15.7 per cent on 2012 figures. For younger people those declines were dramatically steeper.

Ofcom has just shared its complaints data for pay TV and telecoms, Q1 2018. Helpfully it provides an analysis, PDF, Excel spreadsheet and interactive chart for your perusal. Respective headlines from the two segments under the spotlight are as follows: 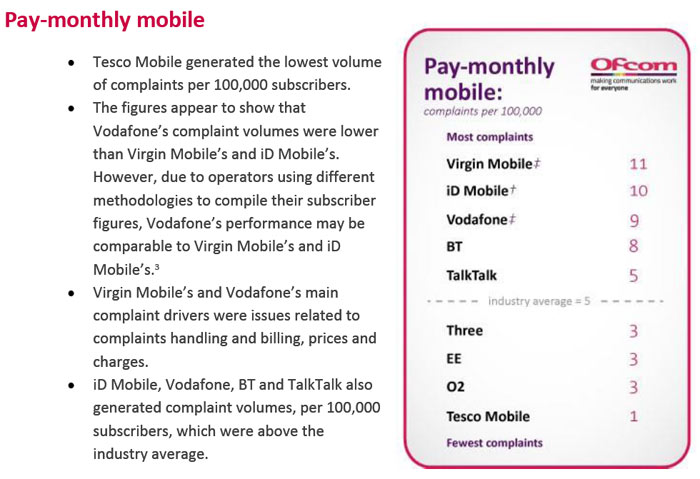 In the latest quarter there were fewer overall complaints about broadband and landline services but mobile and pay TV complaints stayed the same. For the first time iD mobile is included in the data as it now has a stable >1.5 per cent market share. Ofcom receives nearly 300 complaints a day from consumers. 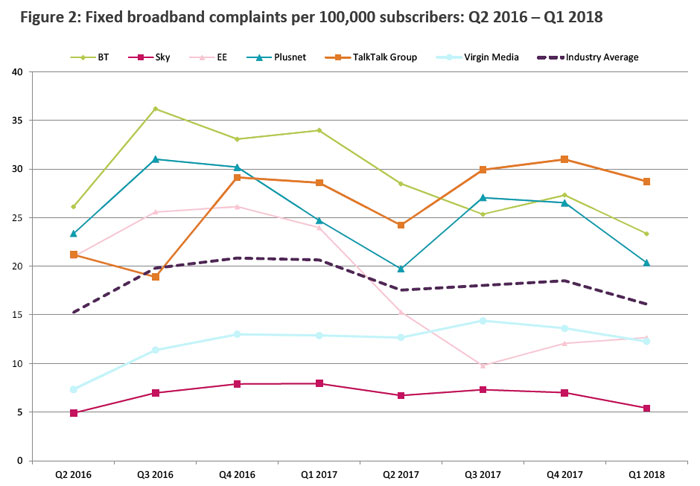 Posted by Ferral - Wed 18 Jul 2018 14:09
We decided to get rid of Sky Q a few month back as their fibre broadband, line rental and tv (everything but sport & movies) was coming in at over £100 per month. We have changed over to BT TV which has full record functionality of Freeview channels and we pay an extra tenner for some of the premium Sky channels like GOLD, Discovery and so on albeit in SD. The BT stuff costs us just over £45 per month which is a great saving, we do also have Netflix which can be watched on the BT box so all is good.

The pay tv services like Sky are just becoming a rip off, last 12 months Sky put their prices up 4 times which is what made us decide to get rid. When the BT contract is up I will be calling their retentions to see if I can keep our current deal as it was an 18 month offer and if not we will change to TalkTalk for 18 months with it being similar price and deal.
Posted by Tabbykatze - Wed 18 Jul 2018 14:13
Surprising that Sky are the least complained about as i know quite a few people with vitriolic opinions of Sky. I wonder if they are considering all Sky Customers, even those without broadband…
Posted by shaithis - Wed 18 Jul 2018 14:25

Tabbykatze
Surprising that Sky are the least complained about as i know quite a few people with vitriolic opinions of Sky. I wonder if they are considering all Sky Customers, even those without broadband…

Sky broadband is pants, their satellite TV is a fairly robust system though that has gone through many iterations to get where it is. It costs a fortune though. I kicked it into touch about 5 years ago now, only wanted it for football, Sky One and the occasional movie and it was costing £88pm for that in HD and an additional box in the bedroom……I'm still surprised how many people I know who complain about not being able to afford x or y, yet have a full Sky package..
Posted by 3dcandy - Wed 18 Jul 2018 14:43
As replies to the above - Sky broadband is OK. It's pretty cheap. Talk Talk however complaints are on the rise and they are the most complained about broadband supplier by far. Sky Q seems to be just too expensive, however as a Virgin customer here with 200 meg broadband and 2 x Tivo V6 boxes I don't enjoy paying £100 a month but the missus does get full use of it and we have a nice projector/surround sound setup in 1080p that looks awesome. So for us, although it's expensive I feel it's just about acceptable. Our broadband is about 265 meg down as well ;)
Posted by DanceswithUnix - Wed 18 Jul 2018 15:01

Ferral
…and we pay an extra tenner for some of the premium Sky channels like GOLD, Discovery and so on albeit in SD.

Does NowTV have the channels you want? I think most content is 720p rather than SD, and it is £8 per month.