Alauda Aeronautics debuted its first multirotor flying racing car back in 2019, and revealed the full sized Airspeeder Mk3 earlier this year. Now the startup has outlined competitive racing plans with AR enhanced events around the globe where "elite pilots will take to the skies to race prop-to-prop".

In the video above you can see the Airspeeder Mk3 tearing around an AR augmented track at 150km/h+.

To celebrate "introducing the world's first racing series for flying electric cars," Alauda has released the video above, showing an Airspeeder Mk3 with EXA racing spec buzzing around a 'track' in Australia. This isn't just sport for sport's sake, asserts Matthew Pearson, Founder, Airspeeder and Alauda Aeronautics. "Nothing drives innovation like racing. The world is ready for advanced air mobility, and we are proud to make history by introducing the world’s first racing series for flying electric cars," said Pearson in a press release. "Airspeeder and EXA represent the future of motorsport and a compelling and exhilarating showcase of the potential of electric flying cars as this generation’s defining mobility revolution." 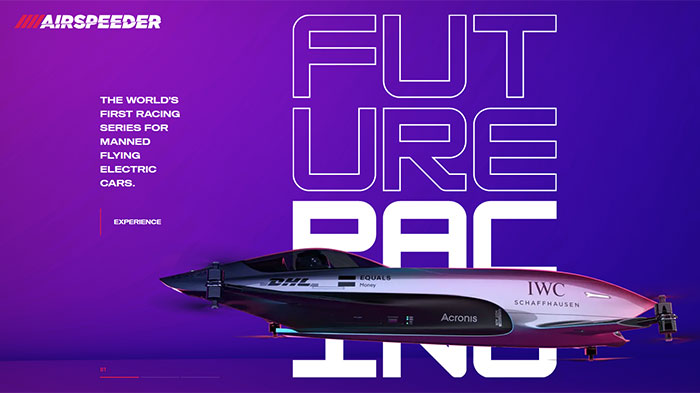 Alauda is working with a team of world-class technical experts, engineers and designers from F1, performance automotive and civil and military aviation backgrounds. Thus, many of the employees come from firms such as McLaren, Brabham, Boeing, Jaguar and Rolls-Royce. With this backing, you won't be so surprised by the Airspeeder Mk3 EXA's key racing specs, as bullet pointed below:

Airspeeder Mk4 racing craft will be manned in 2022

We already saw the introduction of drone racing into mainstream sport back in 2016, so you might be a bit deflated by the above announcement which is, basically, about racing 'big drones'. However, Alauda plans to move to from remote-control to crewed racing craft quite swiftly, with Airspeeder Mk4 flying car racing in events as soon as 2022.

Airspeeder Mk3 - Erm, not a car