Dyson, a company famous for its vacuum cleaners, fans and hand dryers, is aiming to become a big player in the electric car industry. The firm's founder has announced that it is investing £2 billion in a push into automotive and battery development. Of that sum £1 billion would be spent developing the car and the other £1 billion in the solid state, not lithium, batteries to power it. Dyson aims to have its car ready for the mass market by 2020.

There is already a crowded field with established big automakers jockeying for position in the growing electric auto category. Toyota, Tesla, Nissan, Volkswagen AG, and even Jaguar all have big plans for battery powered automobiles. All of these firms are using lithium-ion batteries, however Toyota has previously stated that it intends to have solid state battery vehicles on the road by 2020. 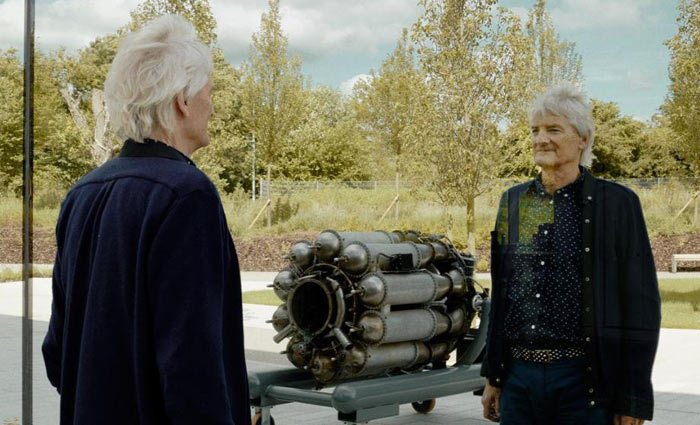 To get noticed and gain some success in the electric car market Dyson doesn't plan to be a 'me too' player. Company founder, James Dyson, reportedly says that his electric car would be "radically different" than those being designed by other car makers such as Tesla. "There’s no point doing something that looks like everyone else's," added Dyson. Obviously Dyson doesn't want to reveal his plans so far ahead of an expected launch date but he said the new car "is not a sports car and not a very cheap car." In a few years Dyson expects automobiles to be easily the largest source of revenue for the company.

Considering Dyson's R&D investments for a moment - is £2 billion much to go up against the aforementioned automotive goliaths? According to Bloomberg figures it is. Dyson's proposed £2 billion spend would eclipse Tesla's spend on R&D over the last five years, for example.

It is thought that Dyson has already made good progress on battery tech. In 2015, it bought a startup called Sakti3, based in Michigan, for $90 million. Sakti3 is notable for its solid state battery advancement claims. On more general automotive tech research Dyson has approx 400 engineers working on its car project and they have been dedicated to this task, in secret, for the last two and a half years. Some of Dyson's auto engineers spent time at Tesla and Aston Martin, among others.

Dyson currently makes its products in Singapore, Malaysia and the Philippines. It is likely that its car manufacturing will be in Asia too. 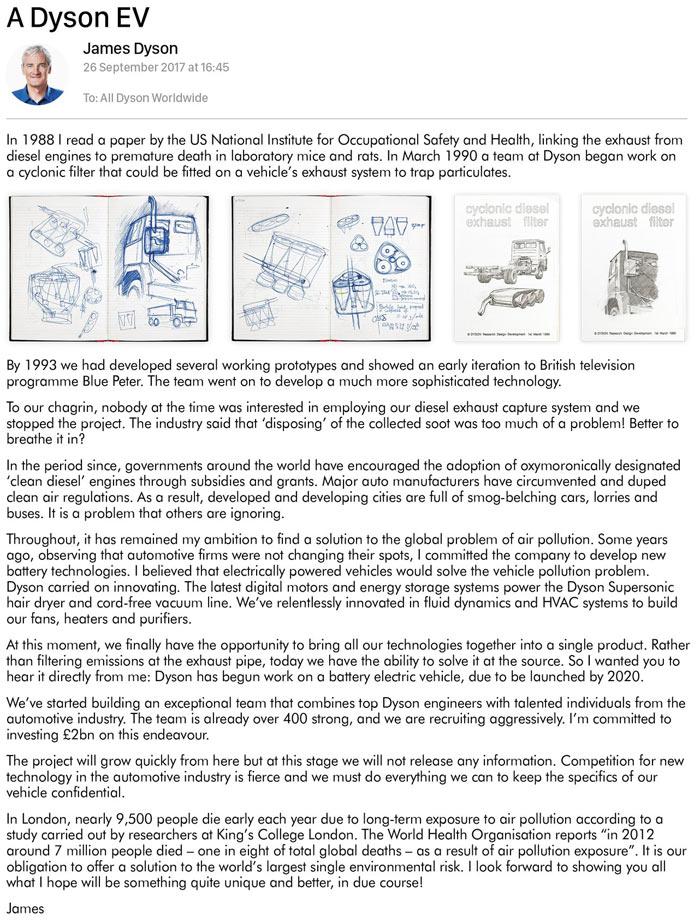 Jonj1611
Sounds like a great way to clean up the environment :mrgreen:

Jonj1611
Sounds like a great way to clean up the environment :mrgreen:

And if it fails, they'll just have to suck it up. At least there's a vacuum in the market, and they can hoover … sorry, Dyson up the crumbs left by the big boys.

Hopefully, that's the puns done. :)
Posted by philehidiot - Wed 27 Sep 2017 10:37
“At the source” - all you're doing is moving the source from the vehicle to the power station at a markedly reduced efficiency as a result.

Plus I'm really not sure how much “innovation” has gone into their latest products… yes the vacuum cleaner advancements have been pretty cool but this whole fan and hairdryer thing is using well established concepts and then applying a HUGE price tag after spending lots of money doing things like ensuring the resonance of the thing produces a noise that is pleasing to the ear.

Best thing I ever saw done to a Dyson hairdyer? It being put into an equally excessively priced blender on youtube.