LG is announcing that its upcoming 2021 premium LCD-based TVs will come with panels which utilise QNED technology (based upon Mini LED technology). In the coming year, starting from CES 2021, you will see LG launch a number of QNED TVs in up to 86-inch diagonals, with 4K and 8K panels, and 120Hz refresh rates. LG says that QNED allows for "a giant leap forward in LCD TV picture quality," reports The Verge. 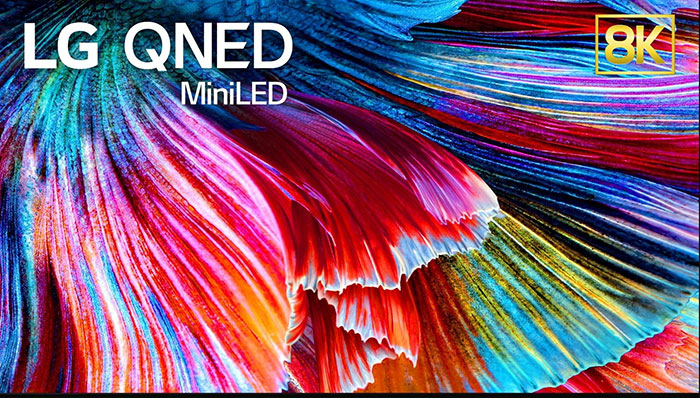 Before we go on, it is worth looking more closely at QNED – what is it? The Verge reckons the Q stands for Quantum Dot, and the N for LG NanoCell technology. So far so simple… Perhaps most importantly, QNED panels are based on Mini LED technology which employs thousands of tiny LEDs to boost peak brightness and contrast in combination with thousands of dimming zones. In the case of LG's QNED implementation a screen will have almost 30,000 LEDs providing peak contrast ratio of up to 1,000,000:1, working in tandem with up to 2,400 dimming zones and advanced dimming zones.

QNED sits firmly as a compromise between modern LCD TVs which sometimes offer hundreds of local dimming zones behind the LCD, and very expensive Micro LED TVs which have millions of self emissive pixels in the screen. Check out the pecking order with brief explanations below:

The closest existing competitor in the Mini LED stakes is TCL with its 8-series TVs which have up to 25,000 LEDs and approx 1,000 dimming zones. Samsung is expected to adopt this tech in some of its TVs too.

As premium TVs, the upcoming QNED series won't be cheap but they could be a lot more accessible than Micro LED and OLED alternatives and form a quality sweet spot above coarser local dimming tech TV sets. We will know more about LG's pricing plans and availability during or after CES 2021.

43" with a decent fast panel is niche enough, asking for curved as well makes it super niche!

on the market offerings it actually is non existent ;)
But I would buy one if there was.

43” at 4k seems to be a sweet spot for pixel density and using screen with no scaling.

I think if the price was reasonable, lot of people would take that screen instead of ~37" UWQHD@144Hz with 1800CR.

For me the reason is simple, you get extra height for productivity, and you not sacrificing anything at all (apart from 24 additional Hz if your GPU manages).
Posted by Kato-2 - Wed 30 Dec 2020 16:24
This is IPS with quantum dots and mini-led dimming zones, it wont be as good as OLED but it might overcome the awful black levels of IPS assuming it works.

Keep in mind LG really need to improve their VRR support on their TV's with variable overdrive and gamma.