After several rumours suggesting a price rise was on the way, Spotify has confirmed that premium subscriber plans are going to be more expensive after Friday, 30 April. Chitter-chatter regarding the potential price hike started after the company was spotted surveying users about such a possibility earlier this year. However, the pricing changes aren't that straight forward to relay to you as they vary by region, naturally, as well as not being applied equally. Moreover, Spotify is expected to roll out a similar series of price increases in world regions not mentioned below (e.g. Asia, South America) soon.

The scale of the price rises for premium plans in the regions we know where they are coming into effect on Friday is as follows:

Above you will see that with the prices applied the UK continues to be the most expensive Spotify music streaming market. For reference, today 1GBP = 1.15EUR = 1.39USD. In the USA customers there are lucky that the price rises are only going to be applied to the Family plan – and then it is the smallest increase of the three territories in this regard.

Existing users will be able to keep their plan price at its current level with a single month's grace period. Thus, if you are already signed up to one of the plans above you will see the price increase in June. 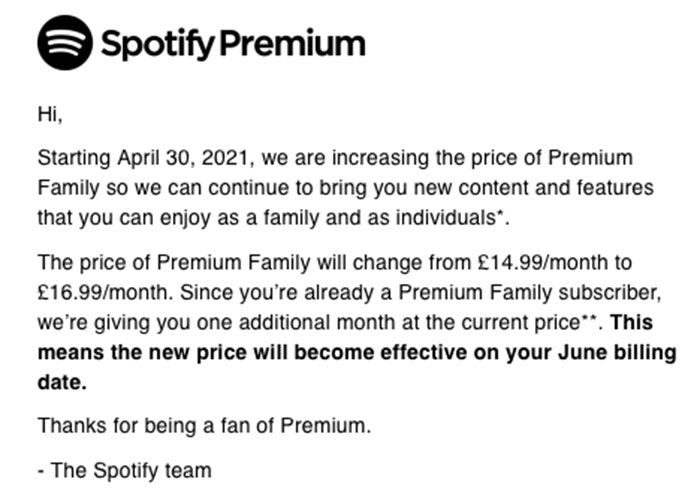 Spotify will release its latest set of quarterly financials on Thursday. The firm made a loss of €125 million last quarter, with average revenue per user down by 8 per cent, despite recent successes of streaming media/entertainment suppliers during the pandemic lockdowns.

We might hear more about the strategy behind these price increases but in its letters to subscribers (example above), the firm has stated that the extra cash will be used so it can "continue to bring you new content and features," to its service.

In related news, Spotify has launched a mini-player for Facebook, so you can share and listen to songs within the confines of that social media platform. It is also said to be introducing podcast subscriptions. Last but not least, the Swedish entrepreneur and Spotify founder Daniel Ek is making moves to buy Arsenal (London) football club.

Do you Spotify, and will the price rises make you consider changing to a rival service?

Posted by jimcumming - Tue 27 Apr 2021 13:38
Well this was all the excuse I needed to dump my Spotify premium family plan. I'm not financing $30 million to Harry and Meghan for premium podcasts I won't listen too, or a takeover of Arsenal football club. All while Spotify pay some of the lowest royalty rates to the artists that provide the backbone of the service. I think Spotify have seriously lost their way.
Posted by LSG501 - Tue 27 Apr 2021 13:59

jimcumming
Well this was all the excuse I needed to dump my Spotify premium family plan. I'm not financing $30 million to Harry and Meghan for premium podcasts I won't listen too, or a takeover of Arsenal football club. All while Spotify pay some of the lowest royalty rates to the artists that provide the backbone of the service. I think Spotify have seriously lost their way.

While I agree with the sentiment you can't blame Spotify entirely for the rubbish payout to artists, most of the artists on Spotify are via music labels and they usually take a HUGE amount before the artists get any.
Posted by cptwhite_uk - Tue 27 Apr 2021 14:16
Spotify's problem is that the music is readily available on other platforms, I'm not bothered about all the expensive podcasts they're subsidising. When Netflix, Spotify et all were £7-10 a month I was happy to pay that, now it's £15-17 each and I'm starting to question the value.

I appreciate prices go up, but the rate of increase far outstrips inflation. I've just downgraded from Family (£16.99) to Duo (£13.99) as there's only myself and the wife on it anyway. I assume Duo wasn't available when I was originally looking.

Think I'm going to downgrade Netflix from Premium (£14.99) to Standard (£9.99) as well, 2 concurrent programs is never more than we're watching, and 1080p is fine with me.
Posted by Spud1 - Tue 27 Apr 2021 14:17
Still pretty cheap for what you get tbh. I don't personally use it so not affected (Prefer Google, given that you get Youtube premium essentially included..), but really doesn't seem an unreasonable increase to me.
Posted by cptwhite_uk - Tue 27 Apr 2021 14:21
As a one off subscription £16.99 doesn't sound too bad. But if all the services are creeping upto £20 a month in the next couple of years, then to have Dropbox, Google Photos backup extended storage, Netflix, Amazon Prime, Spotify….it's going to add up to somewhere close to £70 a month - then I'm going to be seriously considering which of these services I need.