With Intel Core X and AMD Ryzen Threadripper locking horns, high-end desktop (HEDT) has blossomed spectacularly. Many-core computing has become more widely available, and the line between consumer and professional CPUs has been blurred to such an extent that a high-end gaming PC can now serve as a workstation, and vice versa.

Opportunity beckons for PC manufacturers who have invested heavily in gaming systems, as such machines are equally suited to HEDT. If you've got the chassis and know-how, it makes implicit sense to offer it in both gaming and workstation grades, and that's precisely what Corsair has decided to do with its award-winning compact PC, the Corsair One.

HEXUS readers ought to be familiar with this eye-catching rig. Measuring just 200mm x 176mm x 380mm in size, Corsair's small-form-factor solution is in our estimation one of the most attractive desktop PCs on the market, and fond as we are of the jet-black gaming models, we can say without hesitation that the grey workstation-grade One Pro i200 is even prettier.

The lighter colour scheme lends itself really well to the 2mm-thick aluminium outer shell, while the angular bottom and top vents, combined with the patterned mesh sections on the sides, give the whole system a rugged look befitting a professional environment. Even the customisable RGB lighting doesn't look out of place, and I certainly wouldn't mind one of these beauties on my desk.

A weight of almost 8kg is testament to the quality of the unit, and in keeping with earlier models, the specification sheet belies the 12-litre volume. At the heart of the One i200 lies a 14-core, 28-thread Intel Core i9-10940X processor, 64GB of quad-channel Corsair Vengeance DDR4 SO-DIMM memory and an Nvidia GeForce RTX 2080 Ti graphics card. Such goodies are installed on a Wi-Fi-enabled ASRock X299E-ITX/ac motherboard, along with a 2TB Samsung PM981 M.2 SSD, and as before, both the CPU and GPU are liquid cooled.

In an effort to precisely manage noise output, the GPU and CPU coolers are interconnected, allowing the CPU block to read GPU coolant temperature and optimise fan speeds accordingly. Speaking of fans, the primary convection-assisted blower is a 140mm ML140 installed in the roof, though there is a further 80mm fan on the graphics card heatsink, used to cool memory and voltage regulators, and of course a 92mm fan in the compact Corsair SF750 power supply. 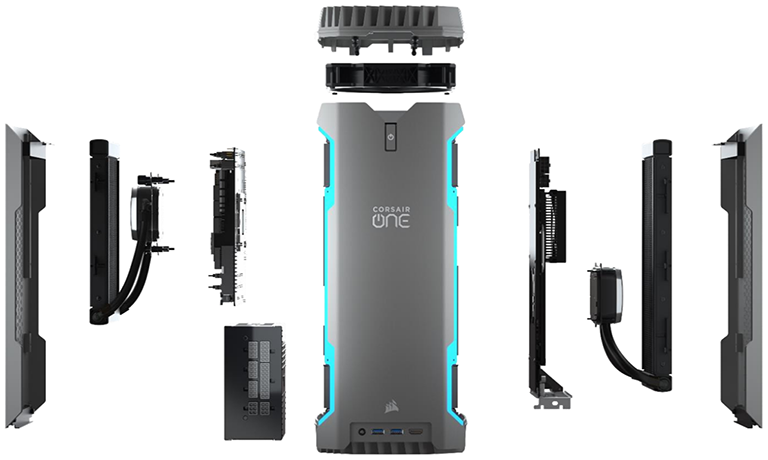 A healthy selection, sure, however we'd like to have seen 2.5G or 10G Ethernet, and for creative types, the lack of Thunderbolt connectivity could be a deal-breaker. Such features would enhance the i200's ability to connect to the fastest external storage solutions, and that's an important point as upgradability isn't ideal. Though the One Pro can be opened, it's an intricate interior to work with, and official upgrade paths are limited.

Users have one 2.5in drive bay plus two unpopulated M.2 slots to play with, however to our surprise the list of officially supported upgrades hasn't grown and includes only a Corsair One 32GB DRAM Upgrade Kit and any Corsair 2.5in SSD. With regards to the two-year warranty, Corsair's official stance is as follows: "Customers can upgrade memory and storage themselves without voiding their warranty as long as they follow these instructions and use only validated parts."

Upgradability is an inevitable limitation, and so too may be the £4,300 price tag. It is of course possible to build an equally powerful rig for hundreds of pounds less, but Corsair reckons its small-form-factor integration is enough to warrant such a premium. There's no denying this is an impressive amalgamation of kit in a beautiful chassis, so let's dig in with a new suite of workstation-specific benchmarks.