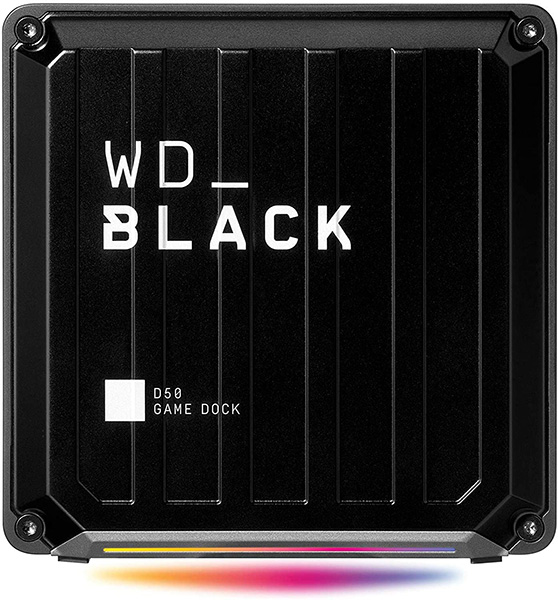 Available as a barebones unit (£280) or with a choice of 1TB (£430) or 2TB (£580) NVMe SSDs preinstalled, its purpose is to enable a laptop or desktop computer to extend super-fast gaming storage and connectivity options through a single Thunderbolt cable.

Measuring 120mm x 120mm x 55mm and weighing 446g for the 1TB SSD model, it's a handsome bit of kit that duly toes the WD_Black aesthetic. It's unobtrusive enough to be kept behind a monitor and looks suitably premium sat on the desk. Build quality is decent on the metal casing, while the branded side carries a narrow strip of now-obligatory RGB lighting whose functionality is controlled in the Dashboard software. Being fair, WD does RGB better than most; it's bright without being blinding, and is sufficiently diffused as not to see the individual LED hotspots contained within the strip. We, however, chose to run with it off.

The bundle includes a 180W Delta power brick and a single 60cm Thunderbolt cable. The unit is designed to be stood up, with two grippy feet providing good traction, but there's no reason why you can't have it on either side. 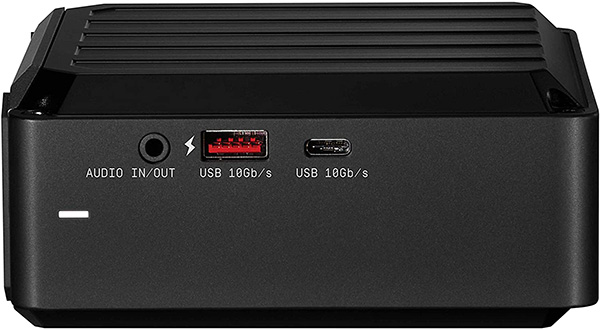 Doing so reveals the ports in clearer fashion. On one side there's USB Type-A that also supplies up to 7.5W of charging power. Next to it resides a Type-C port, and both offer 10Gbps throughput. An audio port for headphones and a small power LED rounds it out.

The rear is busier. The left-hand Thunderbolt 3 port offers up to 87W of charging for your laptop. The right-hand port, meanwhile, is geared towards accessories or an additional display. Both have peak 40Gbps transfer rates. There's also dual USB Type-A, a further USB Type-C, Gigabit Ethernet and DisplayPort. 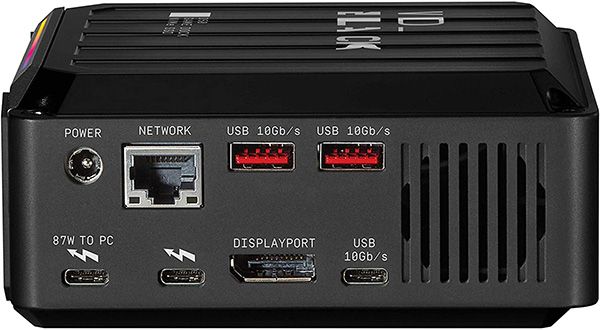 On the 1TB model WD uses its own heatsink-clad SN730 NVMe SSD which can be accessed by removing four Allen screws. The D50 Dock is rated to offer up to 3,000MB/s reads and 2,500MB/s writes, which is close to the drive's maximum throughput via the more traditional M.2 route.

Though the drive got up to 80°C during testing, the unit's fan, directly behind the SSD, never activated, and there are no settings within the Dashboard to manually force it on. We guess WD is happy with a passive solution until at least 80°C, then. The D50 is backed by a five-year warranty. 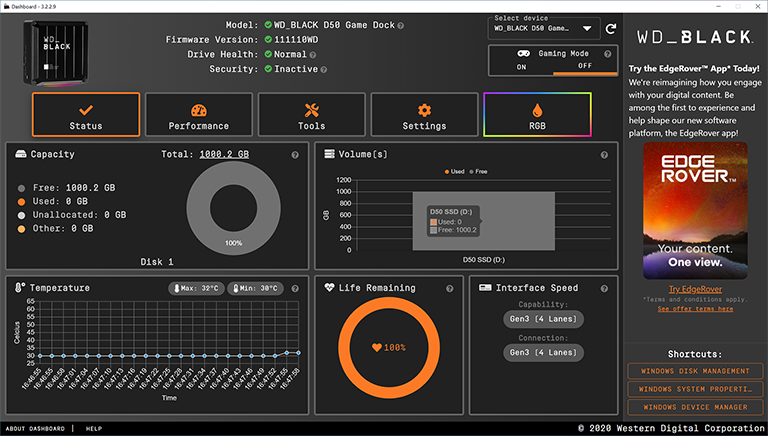 Operation is as simple as hooking up the mains adapter and then connecting to your host computer via the supplied Thunderbolt cable. We tested by pairing the D50 up to an MSI Z590 Ace motherboard featuring dual Thunderbolt 4 ports. In this instance, as you can see, the transfers take place over four lanes of PCIe Gen 3 (40Gbps).

The tabs are self-explanatory. Tools enables firmware updates, while RGB controls up to 13 effects, including tie-ins with four pieces of third-party lighting software.