Fast computer storage received a shot in the arm during 2020 as more manufacturers jumped on the PCIe 4.0 bandwagon. The latest M.2 drives are able to hit over 7GB/s in sequential transfers, offering creators that extra zip when moving huge files around.

Yet while AMD has wholeheartedly adopted PCIe 4.0 for its latest processors and motherboards, the same cannot be said for Intel, which still has the lion's share of the PC market. Looking to turbocharge the storage performance of almost any desktop machine adhering to the older PCIe 3.0 standard, WD has come out with an add-in card solution which RAIDs two M.2 SSDs and presents them in a heatsink-clad half-height, half-length (HHHL) form factor. Enter the WD Black AN1500.

Available in 1TB, 2TB and 4TB capacities, the premise is quite simple. Take a couple of commercial NVMe SN730 M.2 SSDs, harness them in performance RAID0 mode by adopting an enterprise-grade controller from Marvell, and present the solution in an eye-catching add-in card replete with RGB.

Useful for enthusiasts who need PCIe 4.0-like sequential performance but don't want to move their entire platform over for now, there's merit in WD's thinking... but it certainly doesn't come cheap. The three models cost twice as much as decent M.2 PCIe 3.0 drives of the same capacity, so you really need that extra, significant bump in primarily sequential transfers for the AN1500 to make sense. 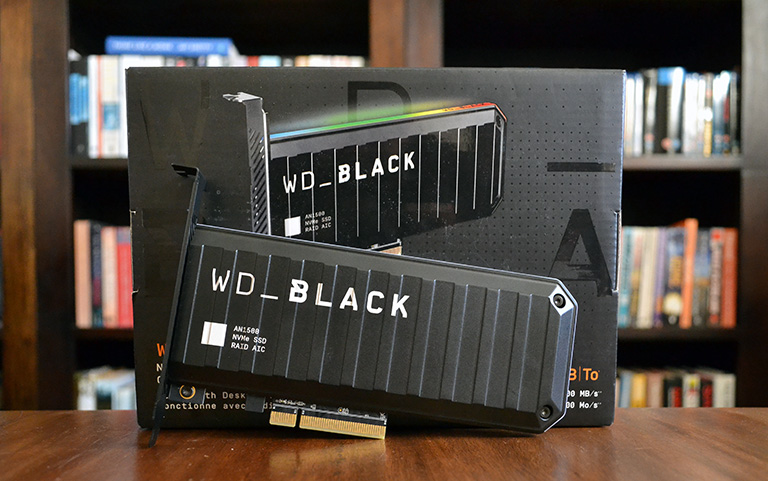 Credit where it's due. WD has done a good job in the aesthetics department. The two underlying drives are wrapped inside an attractive metal heatsink that's further enhanced by a customisable RGB lightbar. Build quality is excellent on the 256g drive.

The trio of models connects with the motherboard via a PCIe 3.0 x8 interface - installed in a spare x16 mechanical slot - which provides double the bandwidth of regular M.2 drives. As most compatible motherboards have a total of 16 lanes allocated to graphics across two slots, opting for this drive will drop GPU-to-system bandwidth by half, or x8, so that it worth bearing in mind if you're a hardcore gamer.

Installation is a plug-and-play affair on the two boards we tested on - Asus Crosshair VIII Hero (AMD X570) WiFi and Maximus XII Hero WiFi (Intel Z490) - though WD publishes a compatibility list on its site. AN1500 is bootable, too, should you wish to use it as the primary, OS-holding drive.

Costing a whopping £450, our 2TB sample features two SN730 1TB drives that each hold an in-house WD controller and 96-layer SanDisk TLC NAND. The quoted performance figures are for the drive's layer of SLC cache, yet speeds ought to remain handsome unless you're reading and writing extremely large files that swamp the cache and flow over to the slower TLC NAND. In most circumstances, however, the controller's management of caching blocks will lead to consistently high transfer rates.

In keeping with the AN1500's speed remit, WD goes all-out for performance by removing any power- and performance-saving protocols when in Game Mode. We know this because the AN1500 idles at around 8.5W, and pulls an average of 14W when mixing up reads and writes. Unlike most M.2 alternatives, the idle temperature is quite high, averaging around 52°C when the drive is doing nothing, which leads us to believe the large, all-encompassing heatsink is necessary as well as stylish. 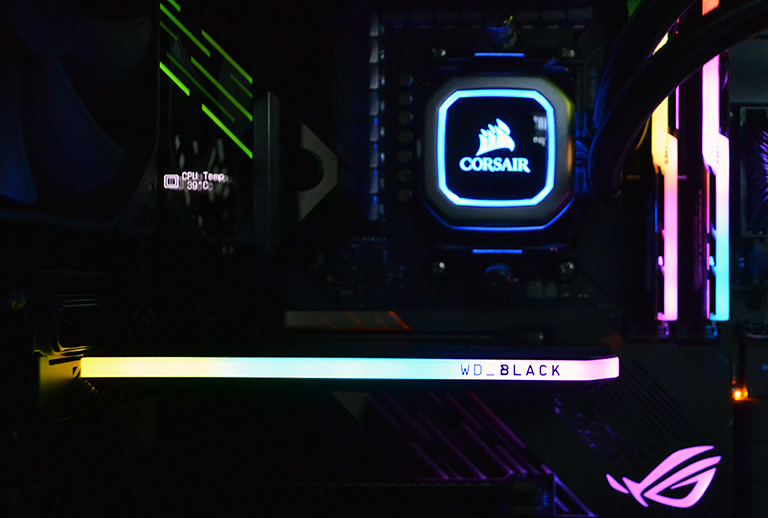 WD has adopted RGB illumination on its latest series of high-performance gear. Thankfully, it is tasteful on the AN1500, with 16 LEDs evenly spaced around a diffuser running across the top and side. No hotspots are present, and WD provides up to 13 effects from its Dashboard utility.

Lighting can also be coordinated with an Asus, Gigabyte or MSI motherboard through their respective utilities, and it looks good in a system with plenty of RGB already in situ. It's difficult to know exactly how much power the LEDs pull, but they can't be helping thermals. 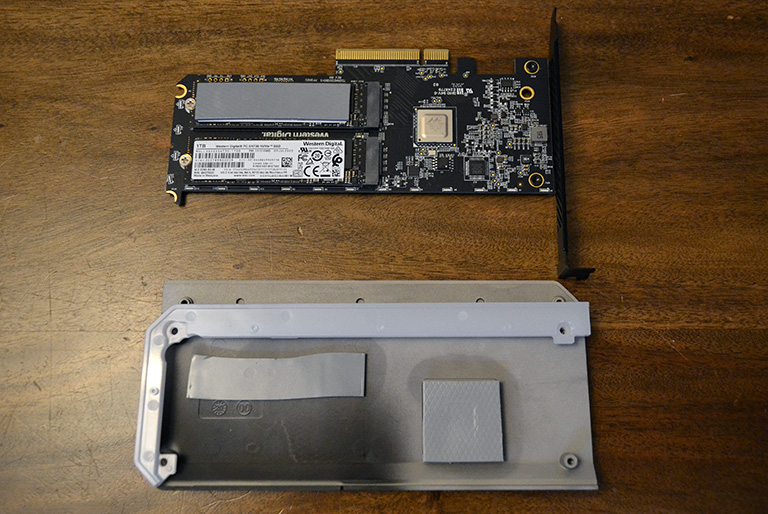 Underneath, it's good to see that WD has paid attention to detail. Both drives and controller have thick thermal pads in contact with the upper heatsink. The rear plate doesn't provide any overt cooling of its own. Rather, it's there for clamping and rigidity duties.

Offered with a five-year warranty and a copy of Acronis True Image WD 2020 for straightforward migration, the real question is how it performs against its peers. Let's find out.