Most of us have become accustomed to the buttery-smooth and whisper-quiet experience provided by solid-state drives (SSD). Now legion in laptops and desktops, it's inevitable that anyone looking for portable external storage will want the same benefits when moving large files between computers.

Storage manufacturers have cottoned onto this fact by releasing a slew of external solutions with SSDs rather than mechanical hard disks providing the storage capacity. Advancements in interface speed on both ends combine to offer blistering performance rivalling quality internal SSDs.

One such drive is the WD My Passport SSD, now in its second generation, available in 500GB, 1TB, and 2TB capacities priced at £137, £222, and £373, respectively. Offering up to 2x the sequential performance of the first-gen model, we take the 1TB version in for review today. 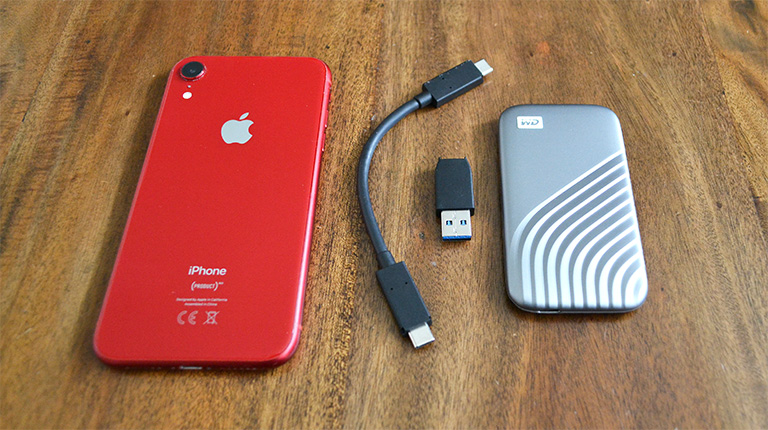 So much smaller and lighter than an iPhone XR

My Passport SSD (2020) is initially on pre-order in grey (pictured) and will be followed by red, blue and gold models at a later date. Outfitted with a USB-C 3.2 Gen-2 interface (10Gbps) connector bridging from an internal NVMe 1.4 SSD, WD provides a rather short, 17cm Type-C cable to the host computer. That's mostly fine for a laptop but we would prefer the cable to be around 30cm or so in length, for those who like a bit more space and/or intend to use it with a desktop machine whose 10Gbps Type-C port is solely on the back. Of course, one can still use the My Passport SSD with Windows and Mac laptops or desktops featuring only USB Type-A through the bundled adapter.

For those with a curious nature, My Passport SSD uses a derivative of the popular SN550 drive. Though listed already, WD says the 2TB model will be available later on this year, presumably when the underlying SN550 is offered in that capacity - it currently tops out at 1TB.

Eminently portable at just 47g and presented in a very pocketable form factor measuring just 100mm x 55mm x 8.9mm, WD has totally revised the styling from the first-generation model. The design language is consistent with regular My Passport mechanical drives from this year as both feature a tactile, ridged pattern alongside a smoother section bearing the name. Be warned there is no activity light, and being based on noiseless SSD, viewing the host computer's file explorer or notifications is the only method of discerning if it's actually working.

There's no enhanced IP protection so it's not overtly ruggerdised, waterproof or completely dustproof. That said, with an SSD at the helm, it'll survive drops and knocks thanks to the anodised aluminium body and smooth corners. Unlike the rival Samsung T7 Touch touting similar speeds, however, there's no biometric fingerprint reader option on the My Passport SSD line.

Connected to our latest AMD Ryzen-based test system, we ran the performance rule book by comparing My Passport SSD's performance against a SanDisk Extreme 500 (500GB) drive from 2017 which also touts an internal SSD albeit hooked up to a USB Type-A connector.

Evaluated by the popular CrystalDiskMark sequential test, this year's My Passport lives up to its GB/s billing on reads and almost gets there on writes, representing about 2x the throughput of the older drive. It's clear to see the interface and bandwidth progress in the intervening period. The enhanced performance is very handy if you're moving massive files across systems on a regular basis.