The enthusiast SSD market may be touting jaw-dropping speeds and flashy RGB lighting, but it is in the mainstream segment that solid-state drives are being rejuvenated. Increasingly affordable offerings using either a SATA or PCIe interface have eroded any remaining obstacles, and if you're still waiting to make the move from a traditional hard disk, Kingston's A2000 Series might just push you over the edge. 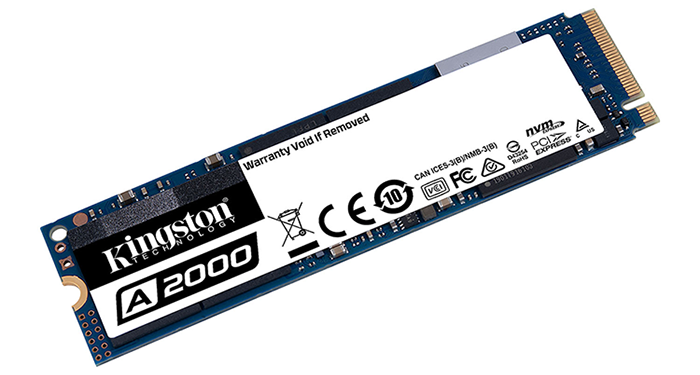 Bringing NVMe PCIe 3.0 x4 speeds to the masses, the A2000 is described by the manufacturer simply as "an affordable storage solution with impressive performance." Given the specification, it's hard to argue with that assessment. At the time of writing, launch capacities of 250GB, 500GB and 1TB are priced at around £40, £70 and £135, respectively, putting cost-per-GB at under 15p. An affordable upgrade for most users, though SSD pricing does continue to fluctuate; the 1TB drive has been known to fall closer to the £120 mark, so it's worth keeping an eye out for deals.

And attractive pricing doesn't necessarily come at the expense of hardware capability. Kingston is employing a Silicon Motion SM2263 controller, 96-layer 3D TLC NAND from Micron, and an in-house DDR4 cache. Said combination delivers sequential read and write speeds of up to 2,200MB/s and 2,000MB/s, respectively, though do be aware that write performance drops to 1,100MB/s on the 250GB model, on account of fewer memory chips interfacing with the controller.

Random performance of up to 250,000 IOPs is in line with our expectations of an affordable NVMe drive, as are endurance ratings of 150 TBW, 350 TBW and 600 TBW, for each of the three available models. We're pleased to see Kingston back its mainstream M.2 range with a five-year warranty as standard, and for the security conscious there's built-in eDrive support, 256-bit XTS-AES hardware encryption as well as compatibility with a variety of TCG Opal software management solutions.

Kingston isn't necessarily rewriting the SSD playbook, yet it's satisfying to see a mainstream drive choose not to overlook features that are typically reserved for the high-end. Security, warranty, performance and dedicated caching are all well catered for, and there's not a whole lot to criticise. If we're nitpicking, the blue PCB isn't the most attractive in terms of appearance, yet even that's hard to fault given that Kingston is using a single-sided layout to simplify installation in, say, an ultra-slim laptop. 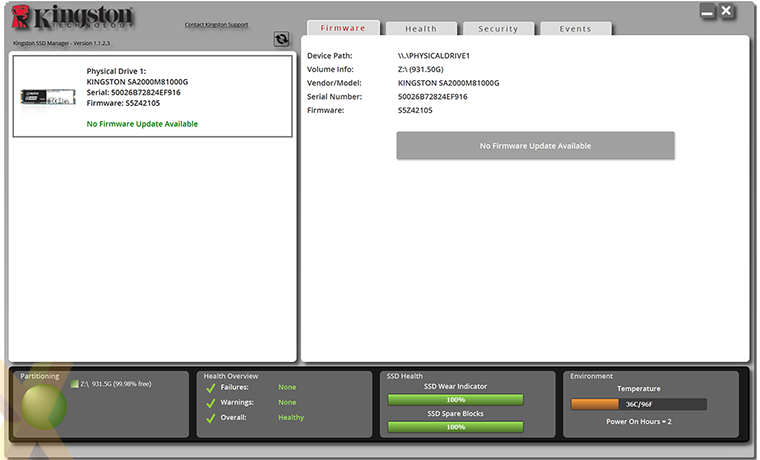 Continuing the simple-but-effective approach, Kingston has the software essentials covered in the form of a two-part bundle. Firstly, there's a license key for Acronis True Image OEM, making it easier for users to clone an existing drive during an upgrade, and secondly the lightweight Kingston SSD Manager (pictured) is a free-to-download app that manages firmware updates while keeping tabs on drive health and security. We're liking what we see, but let's run the benchmarks to be sure the A2000 serves up no nasty surprises.