The consumer solid-state drive (SSD) market can be split into two broad categories. On the one hand you have fast drives that connect to the system via a PCIe Gen 3 x4 interface, often hitting sequential speeds in excess of 2GB/s. The other end of the spectrum is home to SSDs that use cheaper, slower Nand and mate this with a Sata interface that limits performance to no more than 550MB/s.

Though we would enjoy seeing the industry move over to PCIe en masse, the significant bulk of sales still occur in the Sata market, presented in either a 2.5in aluminium enclosure or, lately, through space-saving M.2. Crucial is tapping into this fertile ground by releasing another mass-market drive. Enter the MX500.

Available in 250GB, 500GB, 1TB and 2TB capacities, value and reliability are key concerns, so let's distil exactly what Crucial has done by looking at the MX500's vital specs in relation to its predecessor and entry-level BX300

Value is clearly of utmost importance. Achieving this results in a move away from the Marvell controller and use of Silicon Motion's 2258 four-channel chip. Does this mean that the MX500 is largely a rebadged BX300 presented in much larger capacities? The answer is, for the most part, no, and we will explain why.

Though MX500 uses the same controller as the entry-level BX300, which tops out at 480GB in capacity, Crucial updates the firmware and Nand chips this time around. You may recall that the company has adopted 3D Nand across its range, where the presence of multiple layers enables SSDs to spread out their cells and mitigate electromigration problems associated with cramming more capacity into ever-smaller geometries. There's nothing new in that, as Intel and Samsung have gone down the same 3D Nand route. The difference here is that MX500 is home to second-generation 3D Nand from Micron, now composed of 64 layers, instead of 32, paving the way for larger capacities.

Like previous MX-series drives, Crucial offers power-loss protection for data already present on the drive, though the mechanism for protecting it is different. Other MX drives have used a series of ceramic PCB-mounted capacitors to hold recent, pertinent pages but as you will see lower down, they're conspicuous by their absence on MX500.

Instead of relying upon them, Crucial has looked at how to deal with the problem from a Nand and firmware point of view. Without getting too technical, an SSD's cells are arranged in pages, constituting the smallest amount of information that can be written in one go (4KB to 16KB, usually). These pages can be either lower (easier to program) or upper pages, and an unexpected power loss means that either sets of pages haven't been completed before the proverbial lights went out. 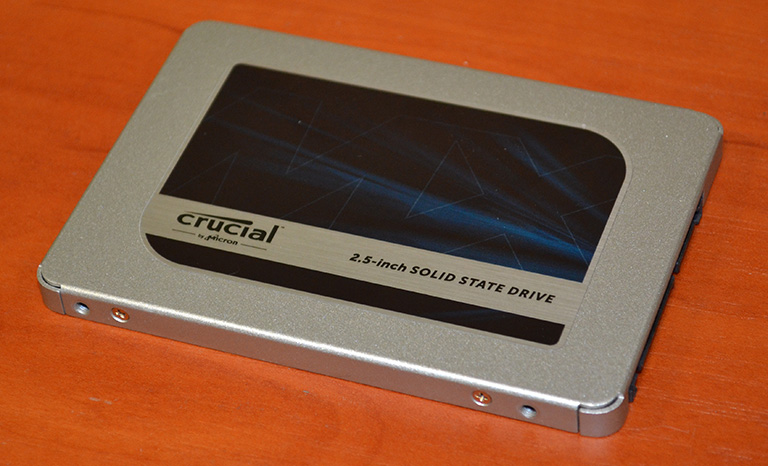 Rather than rely on capacitors with a minimal hold-up time, usually 1ms, Crucial says its engineers have been able to tweak the firmware and controller and integrate data-at-rest protection into the second-generation Nand itself, made possible by the way it sequences writing to these pages. From what we can gather, this sequencing enables the MX500 to have enough time to put the data into a lower-page program. Point is, the combination of chipset and newer Nand removes the need for specific capacitors and, if you go by what Crucial tells us, the MX500 also improves upon endurance and energy efficiency as a direct result of these improvements, too.

The 1TB drive, which is the focus for today, has a 360TBW rating, meaning it is able to write around 200GB per day, every day, for five years. That latter point is important because Crucial now backs up this latest MX SSD with a five-year warranty, rather than three, and increases the MTBF to 1.8m hours, up from 1.5m. Our takeway is that incremental improvements in firmware, new Nand, and close collaboration with Silicon Motion has enabled Crucial to have enough confidence to up the previous generation's longevity.

As with other Crucial drives, the MX500 is available in a 2.5in form factor presented in aluminium casing that is 7mm high as well as M.2 (2280), and both are constricted from a performance viewpoint by riding off a Sata interface. It's a shame that Crucial hasn't taken the opportunity of moving over to NVMe and PCIe.

SLC write acceleration technology is also present, where any portion of Nand, up to about 40GB, can be temporarily 'converted' into one-bit-per-cell SLC mode for faster accesses. Being an MX-series model, there's 256-bit AES hardware-based encryption support, so no loss in performance even if in this secure mode, and the series is compatible with Microsoft's eDrive, too. 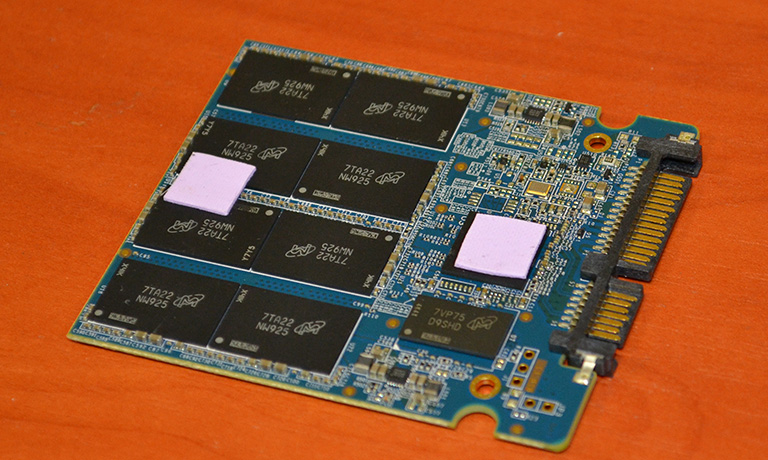 Silicon Motion controller sits next to some buffering DDR memory

Crucial uses 256Gbit dies, with two for each of the 16 Nand packages - eight on each side - composed of 64GB apiece. These combine to offer that 1TB capacity. Crucial also bundles in an adapter for systems that work best with 9mm-high drives, and usefully, continues to add in the handy Acronis True Image HD software, redeemable online, for easy migration from another drive.

64-layer 3D Nand, power-loss immunity and a really keen street price are the hallmarks of this 1TB SSD. Let's now see how it performs.