There's no shortage of gaming keyboards out there, but out of all of them, Mountain's Everest is the one we've been looking forward to most. The modular concept appears brimming with potential, and though it feels like an age since the German upstart passed its Kickstarter goal, the intrigue returned to the surface last week when the flagship Everest Max landed at our doorstep.

Most readers will no doubt be familiar with the product's journey thus far, but as a quick recap it's worth pointing out that the Everest keyboard is initially available in a choice of three models, each in midnight black or gunmetal grey colour options. The Everest Core Barebone (£130) offers a tenkeyless foundation for you to use your own switches and keycaps, the Everest Core (£150) includes keycaps alongside a choice of Cherry MX switches, and at the top of the pile the Everest Max (£230) adds all the bells and whistles. 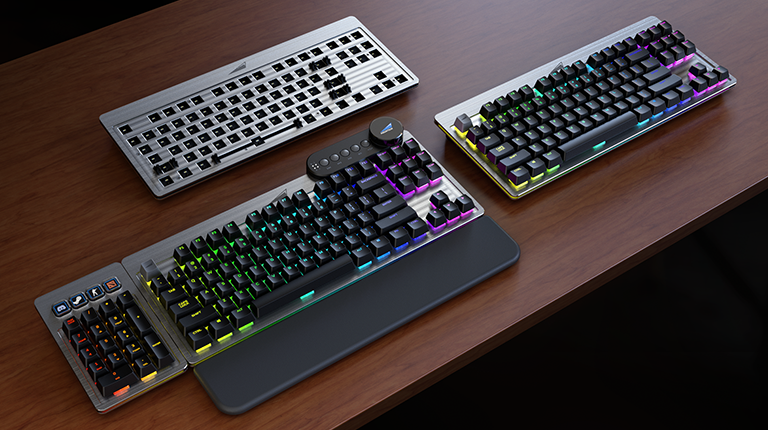 It is those bells and whistles that have piqued our curiosity, so let's start there and talk about the three bundled modular accessories, beginning with the detachable numpad. Measuring 154mm tall and 95mm across, the numpad alone tips the scales at 286g, with the weight helping convey the same feeling of high-end build quality as the main keyboard. Clearly not your average numpad, Mountain's implementation includes four programmable display keys at the top, all of which can be customised with an icon of your choosing.

Think of it as your very own integrated Stream Deck Mini, and though there are only four physical display keys, the ability to toggle between five separate profiles paves the way for 20 personalised shortcuts. It's a very nice feature and Mountain offers a downloadable icon pack to help get users started, but if we're being critical we might have preferred the underlying 72x72px TFT LCD displays to have been angled toward the user - you almost have to lean across from the normal typing position to be able to fully appreciate the icons.

The concept of customising your own keyboard has obvious appeal, yet after a few days of use you begin to question the merits of a detachable design. The numpad features an adjustable USB-C rail on the underside, which in combination with metal rods and magnets allows it to be docked to the keyboard's left or right side. Seems useful on paper, and lefties in particular may feel their prayers have been answered, but with the numpad installed in the normal position, I personally struggled to think of a good reason to ever move it.

Mountain does include a short 15cm Type-C extension cable, allowing the numpad to be plugged in and situated nearby, but there's no built-in battery or wireless connectivity, meaning the numpad can't be used as a standalone accessory. A missed opportunity, we feel, and it is also worth noting that while the docking mechanism is reasonably snug, the numpad does exhibit a bit of movement and inevitably behaves like an add-on as opposed to an integral component. 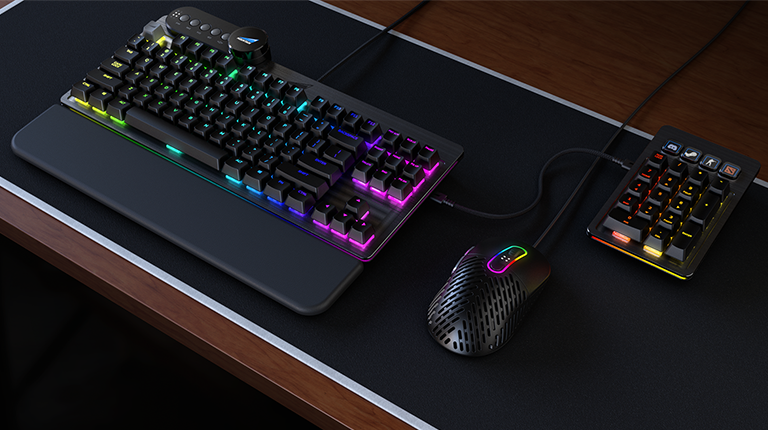 Accessory number two is the media dock, which again attaches via a USB-C plug and is secured by magnets to either the keyboard's top-left or top-right corner. In case you're wondering, the keyboard features a total of six USB connectors; four Type-C for the accessories (two on the top, one either side); another Type-C on the underside for connecting to the host PC via a braided 2m Type-C to Type-A cable; and a USB 3.2 Gen 1 Type-A hub on the top edge.

Back to the media dock, it includes four status LEDs, four dedicated media keys (previous, next, play/pause, mute), a select button, and a 40mm dial outfitted with a TFT IPS display. The display isn't the sharpest, as is to be expected given the 240x240px resolution, yet the dial is responsive and comes pre-loaded with eight menu options including clock, profile, volume and brightness. You can see it in action here, and the screensaver, which by default kicks in after 30 seconds, can be configured to an image of your choice through the accompanying software suite. The media dock works just fine in practise, but does look somewhat clunky and the plastic body doesn't exude the same level of quality as the other components.

The third and final accessory is the padded palm rest, which clips magnetically onto the keyboard's bottom edge and comes wrapped in an artificial leather that feels comfortable against the skin. All three accessories work well, but you'd be excused for deeming the entire package over-engineered. Sure, it's nice to be able to customise the keyboard, and some may prefer to move certain things around, yet we suspect most will use a standard layout, and that being the case, you may favour a unibody design with complete rigidity throughout and a full-length palm rest. As it stands, a wider range of accessories are going to be needed to justify Mountain's modular ambitions.

Is the Everest Max therefore worth the near-£100 premium? That's debatable, but what we can say for certain is that we appreciate the underlying tenkeyless Everest Core for doing the simple things well. Dimensions of 154mm x 366mm x 41mm are tidy, double aluminium faceplates add good rigidity while sandwiching an RGB strip that extends all the way around the body, and other than that the design is entirely free of clutter. There aren't even any status LEDs, though a software setting will allow you to set the likes of Caps Lock and Scroll Lock to remain backlit when enabled.

Build quality is good throughout and theCherry MX switches are hot swappable, giving users the ability to mix and match switches or upgrade at a later date to any two-pin plate mounted switch from the likes of Cherry, Kailh or Gateron. Speaking of key switches, a choice of Red, Brown, Blue, Speed Silver or Silent Red are available at launch on a US layout, though UK users are sadly limited to either Red or Brown. A range of alternate keycaps and switches are however available directly from Mountain's online store. 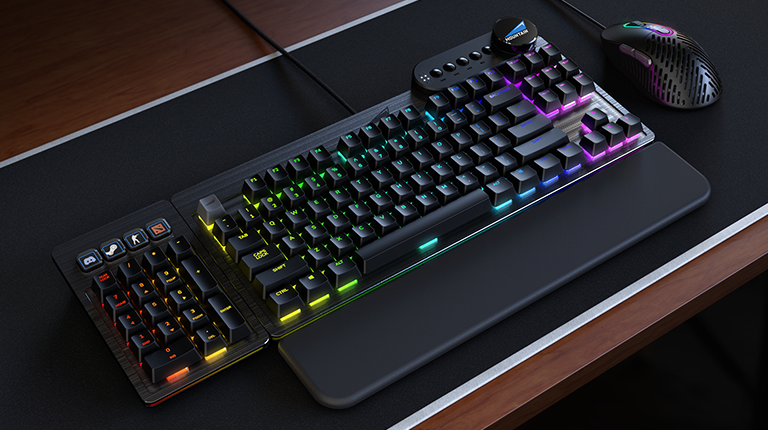 Our MX Red review unit should feel familiar, yet the Everest is notably more satisfying to use than other similarly equipped keyboards currently in the office. Mountain reckons the higher-quality experience is delivered through lubrication of all stabilisers with Krytox GPL-205g0 grease, manually clipped feet on the space bar stabiliser to improve actuation, and dampening foam between the PCB and case to help absorb noise. As a whole, these enhancements come together to create one of the most satisfying Cherry MX implementations we've experienced.

There are a couple of other neat additions, too. Moving away from pop-out plastic feet that typically offer just one level of adjustment, Everest employs magnetic riser feet and a bundled set of spacers for you to choose your preferred height. It's a system that works well as the magnets are strong enough to ensure the feet don't move unintentionally, and there are also plenty of routing paths on the underside to help keep cables tidy. We'd recommend clipping the primary USB-C cable to one side as it's a little too easy to pull out when routed straight through the top.

Ticking the customary boxes, Mountain ensures N-key rollover and a 1,000Hz polling rate, there's enough onboard memory for five profiles, and ABS doubleshot keycaps are included as standard - more durable PBT keycaps are on optional extra. Per-key RGB lighting ties in nicely with the sharp, no-nonsense keycap font, but as is the case with most Cherry MX solutions, the lighting is focussed on the upper side of the key switch, resulting in a dim lower half on those keys with a second row of lettering.