Corsair is updating its popular line of Dark Core gaming mice with a 2020 revision dubbed the Dark Core RGB Pro. Introduced as a successor to the 2018 model, the new mouse touts a handful of useful upgrades at a slightly higher RRP of £89.99. 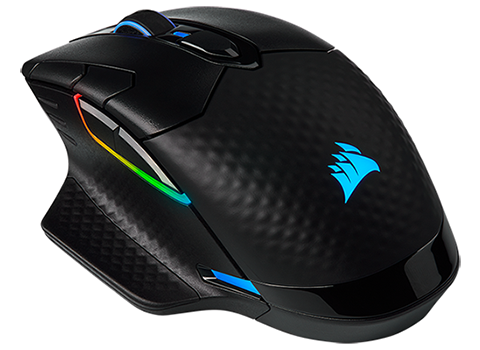 Described by the manufacturer as "a premium wireless gaming mouse ideal for players of FPS/MOBA game genre," the pointer retains familiar ergonomics and a choice of wired or wireless operating modes, but includes a handful of tweaks that help refine the overall package. Promising signs for fans of the original, so let's dig in.

As you might have guessed by the name, RGB is a key selling point, with Corsair increasing the number of lighting zones from five to nine. These include the scroll wheel, the new side light bar, the Corsair logo and dedicated DPI indicators, all of which provide ample opportunity for customisation. The lighting does admittedly look pretty, but whether or not it is appropriate on a wireless product is up for debate.

A 1,000mA lithium-polymer battery powers the unit, and with RGB enabled Corsair quotes a battery life of up to 16 hours in 2.4GHz wireless mode, or 18 hours when connected via Bluetooth. Turn off the lights and battery life is extended to up to 50 hours of continuous use, more than double the outgoing Dark Core RGB. As before, an 'SE' variant will launch alongside the base model, adding support for Qi wireless charging, but takes the price tag up to a cool £100. 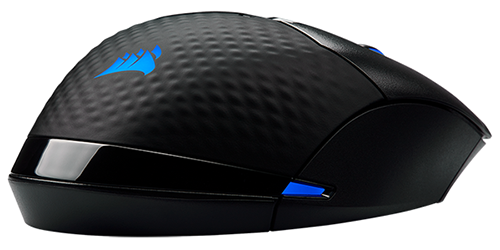 Battery life improvements are always welcome, and Corsair has also taken this opportunity to upgrade the front charging port from micro-USB Type-B to USB Type-C. A sensible step, with the 1.8m braided Type-C to Type-A cable being simple to attach, and a full charge from empty estimated to take roughly two hours. You can, of course, charge while in use, and with a choice of three operating modes - 2.4GHz Slipstream wireless, Bluetooth 4.2 or wired - Corsair has covered just about every usage scenario.

2.4GHz wireless is achieved via a tiny USB dongle and promises sub-1ms latency and a range of up to 33ft while proprietary Slipstream tech automatically detects the least busy channel to help reduce interference. There's also now an option for 'hyper-polling technology,' which can crank the Dark Core RGB Pro's polling rate from 1,000Hz to 2,000Hz, doubling what's on offer from most competitors. Point is, you'll do well to notice any perceivable limitation in switching from wired to wireless, though do note that Bluetooth offers a more basic 7.5ms latency better suited to everyday tasks. Alternating between 2.4GHz or Bluetooth is as simple as flicking a switch on the underside of the device.

Down here is where you'll find a custom, ultra-low-power PixArt PAW3392 optical sensor offering up to 50G acceleration and a native 18,000 DPI resolution precisely configurable in single-DPI steps. For the record, that's an extra 2,000DPI over the 2018 model, yet the end result is fast and consistent performance at all times. Rounding out the hardware, the primary clickers are backed by Omron switches rated for 50-million clicks and tailored to an operating force of 60gf (gram-force) with a 0.45mm actuation distance.

A high-end optical sensor, eight programmable buttons and plenty of RGB lighting is par for the course on a gaming mouse these days, and with that in mind the way a mouse feels in the hand is likely to be the deciding factor for most users. The good news is that fans of the Dark Core profile are likely to find the latest release to be the best yet.

Hold on a minute, eight buttons? Isn't that one fewer than its predecessor? Well, yes, but we reckon that's a good thing. Corsair has done away with the large, triple-button setup on the side of the 2018 model in favour of two simpler buttons that are a) less intrusive to the overall profile and b) easier to locate. The change results in an increase in the amount of textured surface, leading to better grip, while the sculpted shape remains familiar. Corsair reckons "the chassis is designed for multiple grip styles, such as palm or claw," though for my large hands I would prefer a little extra height in the arch. 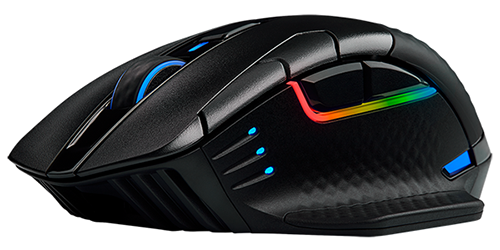 A weight of 133g is a little on the heavy side, and perhaps won't suit users who favour a nimbler solution, and the clickable scroll wheel is distinctly notched, making it ideal for gaming precision, but not for fluid navigation. Elsewhere, the DPI toggle button is easily accessible behind the scroll wheel, with LED indicators helping keep tabs on the setup, and in contrast to the previous model, every button is within reach and easily identified.

The tweaks are noticeable, however there is still room for improvement. The plastic surface doesn't feel as luxurious as other mice in Corsair's stable - I prefer the softer touch of the Ironclaw - and I'm not a fan of the optional side grip included in the box. Magnetically attached, the interchangeable grip can be used to add an extra wing on the right side, but it tends to rub my pinky unintentionally, making the mouse less comfortable. For me at least, the default setup works better, though perhaps those with smaller hands will find the alternative grip useful.