Any PC gaming manufacturer worth its salt understands the need to play in the peripheral market. These are the devices that consumers interact with on a regular basis, and heck, if you already offer motherboards and graphics cards, it makes perfect sense to extend your design language to keyboards and mice.

MSI is of this line of thinking and has updated its vast range of gaming gear with the launch of the Vigor GK80 and GK70 mechanical keyboards. The latter, MSRP $129, adopts a tenkeyless format for those who prefer a minimalist form factor. In for review today is the full-size GK80, priced at $169 (£160 in the UK) and promising premium features for the most demanding gamer.

Competition is fierce in the gaming keyboard arena, particularly at this high-end price point, and at first glance the GK80 doesn't convey the same level of elegance as, say, the recently reviewed HyperX Alloy Elite RGB. It isn't necessarily a matter of build quality - MSI's aluminium top is sturdy and the bundled palm rest is more rigid than most - but rather an overcrowded design that makes the entire keyboard look unusually busy.

The plastic LED strips on the bottom left and right corners do nothing for us, we don't like the fact that you can see screws heads on both sides of the keyboard, and the keycap font isn't tickling our fancy, either. The lettering is on the small side and lacks the crispness needed to make each character stand out. We can understand why MSI has placed both functions on the number keys alongside one another - it helps make the backlight appear even - but doing so makes the lettering on that row even smaller. My eyesight is pretty decent but I have to go up close to make out the % sign.

And the untidiness doesn't stop there. Insistent on having as many identifiable functions as possible, MSI has also labelled the lower side of various keys. The PgUp and PgDn cluster, for example, contains shortcuts to the OC, Gaming and Silent profiles on MSI graphics cards and motherboards, assuming you have compatible hardware. Add to the mix a red stripe across the very top and it's all a little OTT, making the visual aesthetic an acquired taste. 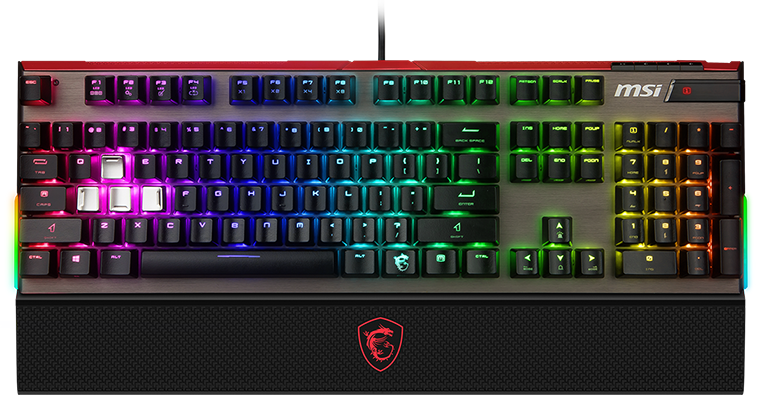 Start to use the GK80 and you begin to wonder; has MSI set out to create a great gaming keyboard, or is the primary goal to extend the features of other core components? There are plenty of signs to suggest that it is the latter. In addition to profile shortcuts for MSI graphics cards, the RGB illumination is intended to sync with other MSI hardware via the firm's Mystic Light utility.

The lighting is suitably bright with plenty of effects to choose from, but other elements are lacking the same attention to detail. Take, for example, the dedicated multimedia keys lining the top-right edge. There are only four - play/pause, mute, volume down, volume up - and they are each far too small to easily distinguish from one another. They also feel cheap in use, with an abrupt click that's out of keeping with the mechanical keys, and are certainly no match for the smooth volume rollers on offer from the competition.

Continuing the growing list of surprise niggles, there's the bundled palm rest which looks good at first glance but, well, isn't. It's nice to see a manufacturer use a metal base to develop a sturdier add-on, and MSI's rubberised surface feels nice, but see the dragon logo in the middle? That feels uncomfortable beneath the hand and does nothing other than spoil the textured surface. And don't be deceived by the photos, as while most keyboards bundle a palm rest that clips on securely, GK80's accessory doesn't actually attach and is designed just to sit in front of the keyboard. Rubberised feet on both help limit unwanted movement, but we'd much prefer a means to connect the two together.

MSI equips GK80 with a semi-transparent, metal-tipped set of contoured WASD keys as standard, and you'll find a dozen optional rubber keycaps in the bundle. None of these are labelled, making them look somewhat awkward, though the absence of lettering does allow the contoured keys to be used wherever you see fit.

A split two-metre braided USB cable is standard fare, as is a USB 2.0 passthrough port on the top edge, and GK80's best feature is the implementation of tried-and-trusted Cherry MX Red key switches. There is an alternative Silver option, but gamers are likely to gravitate toward Red for the familiar linear action with actuation at half distance, no audible click and 4mm of travel.