"To help contain the virus, office workers who can work effectively from home should do so over the winter." That's the latest guidance from the UK government, and though it's impossible to predict what the coming months have in store, there's a very real possibility that home offices are going to become an increasingly viable option for a wider number of employees.

That being the case, it's a good time to consider what hardware could be conducive to working from home. When it comes to data, network-attached storage gets our vote. Whether you're looking to backup your PC, share files locally and remotely, or you simply need more space, a competent NAS is a one-stop solution for all those scenarios and more. There's no shortage of choice out there, so let's cut to the chase by stating that Qnap's TS-453D is the best four-bay NAS we've tested. 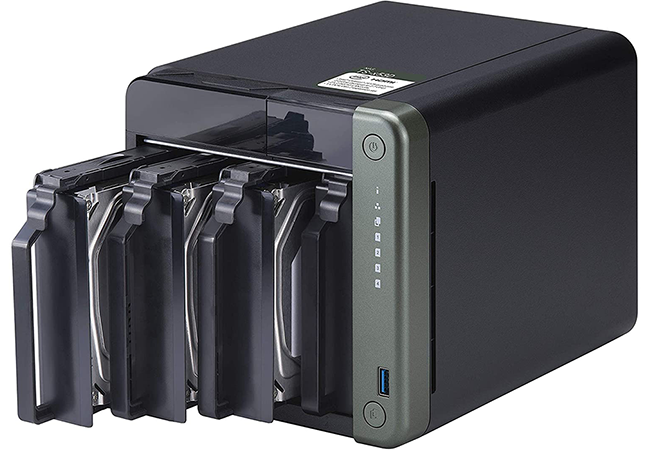 Currently available at around the £520 mark, Qnap's latest-generation box isn't cheap - remember that price tag doesn't include any drives - but it covers a multitude of usage scenarios, including multi-device backups, centralised storage, surveillance cameras, and virtual machines, to name but a few.

A powerful NAS can be deemed the home-office equivalent of a Swiss army knife, and two Taiwanese manufacturers dominate the category. There's Synology, who is renowned for its award-winning DiskStation operating system and user-friendly ecosystem, and Qnap, who typically offers more hardware bang-for-buck. The latter's QTS operating system isn't quite as revered; however the gap is closing and Qnap's performance advantage is becoming more apparent with each new release.

The TS-453D is the best example yet of Qnap hardware getting one over the immediate competition. On the face of things, the four-bay NAS doesn't appear too dissimilar to the rival Synology DS920+. Both employ a quad-core Intel Celeron J4125 processor capable of speeds of up to 2.7GHz and with onboard UHD Graphics 600, and each is married to 4GB of fast DDR4 memory that is expandable to 8GB. The same building blocks, but it is in the connectivity department that Qnap sets itself apart.

Whereas the Synology is equipped with just the two USB 3.2 Gen 1 ports, Qnap's box is outfitted with three USB 3.2 Gen 1 and a pair of USB 2.0 as well. There's also dedicated HDMI 2.0 - allowing the NAS to output direct to a TV/monitor at 4K60 - and a PCIe slot is at hand for future expansion. Qnap's growing portfolio of expansion cards opens the door to M.2 SSD slots for caching purposes, as well as 5GbE or 10GbE networking, though do be aware that the Gen 2 x2 slot will limit the performance of certain cards.

It is worth pointing out that the Synology's DS920+ offers a pair of integrated M.2 expansion slots as standard, but the Qnap is in our estimation the more forward-looking of the two on account of its network configuration. Synology's decision to stick to 1GbE Ethernet ports on the DS920+ was met with disappointment, and Qnap doesn't make the same mistake; TS-453D is armed with a pair of 2.5GbE LAN ports with support for link aggregation via a managed switch. A 150 per cent improvement in network throughput is not to be underestimated, particularly with many more devices now incorporating 2.5GbE as standard.

TS-453D isn't short of hardware muscle, though overall presentation could be improved. The front of the unit has been simplified - the useful LED display of prior generations has fallen by the wayside in favour of a series of status LEDs - and the plastic cover encasing the removable drive trays feels somewhat flimsy. If you're inclined to nitpick, the unit's visible silver backside isn't as elegant as Synology's all-black enclosure, though physical appearance shouldn't necessarily be high on your list of NAS priorities. 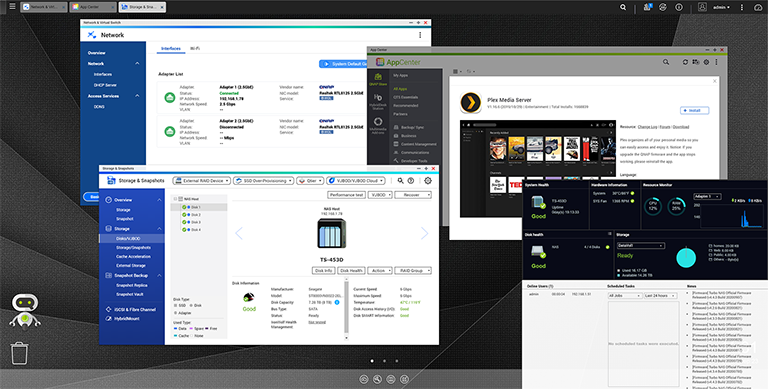 What does matter is the software, and having spent plenty of time with both Synology and Qnap products over the years, we're pleased to find that Qnap's QTS operating system has come a long way. We wouldn't go as far as to call it on par - Synology's software continues to lead the way in terms of presentation, ease of use and overall refinement - but QTS is the second-best option, and a powerful one once you get acclimatised.

Whichever you favour could come down to personal preference, and neither is lacking in features. With an Intel processor at the helm, the TS-453D is well-suited to virtualisation through services such as Docker, and there's enough grunt to power real-time hardware transcoding in Plex. The good news for those unfamiliar with each brand is that live demos are available at qnap.com/en/live-demo and demo.synology.com, allowing users to try each operating system before they buy. Feel free to have a go before proceeding to the benchmarks.