The very real prospect of working from home makes now as good a time as any to consider improving our network configurations. Running dedicated cabling is typically the optimal route for both speed and reliability, but a wire-free setup is easier to deploy, and as we've seen in prior reviews, transfer speeds using the latest Wi-Fi 6 standard can better what's achievable via good ol' Gigabit Ethernet.

Wireless performance has never been better, and if you're worried about pesky dead spots that have historically proven tough to circumvent, you can call upon a mesh solution to help deliver the whole-home coverage we crave. A logical progression from a single-point router, a mesh system employs multiple nodes placed strategically around a property to blanket every room with strong wireless connectivity. 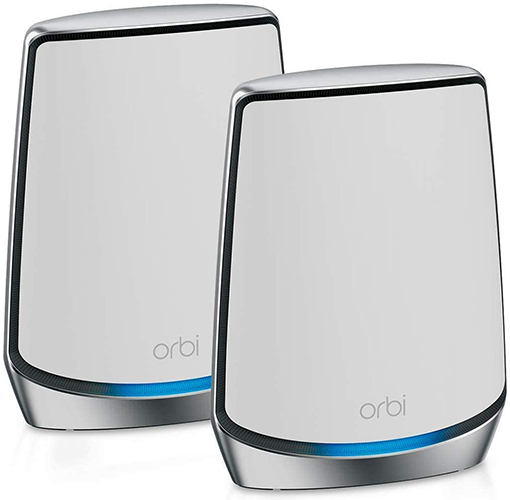 Pricing starts at around £100, but if you really want to raise the performance bar while throwing in an element of future proofing, you may want to consider a higher-end option such as the Netgear Orbi WiFi 6 System AX6000 in for review today. Retailing at £700 for a two-unit system (RBK852) or £960 for a three-node pack (RBK853), the flagship Orbi WiFi 6 System is without a doubt a premium proposition, though it is worth pointing out that Netgear has more affordable offerings in its arsenal. The dual-pack Orbi AX4200 (RBK752) with fewer streams and lower headline speeds of up to 4.2Gbps can be had for £450, and if you don't yet feel the need to venture into Wi-Fi 6 waters, the basic Orbi AC1200 (RBK12) will extend coverage for £105.

Quite the gap between the low- and high-end offerings, so what does the RBK852 offer to warranty such a lofty price tag? From the outside, both the router and satellite units look identical, with a clean, modern aesthetic and a single multi-colour status ring. Netgear's design is tidy, however the units are on the large side, each measuring 254mm x 71mm x 191mm in size. A little too big to be deemed inconspicuous, though such dimensions do afford powerful innards.

Each unit is home to a quad-core 2.2GHz processor alongside eight high-performance amplified antennas, and Netgear sets itself apart from more affordable competitors by employing a tri-band configuration. 2.4GHz (1.2Gbps) and 5GHz (2.4Gbps) bands are at hand for wireless devices, and a third dedicated 5GHz band serves exclusively as a dedicated 2.4Gbps backhaul between router and satellite. You can, if you prefer, use a wired link as backhaul, but the AX6000 isn't going to be left wanting in terms of wireless potential, and as you'd expect there's support for current many-device Wi-Fi 6 enhancements such as MU-MIMO and implicit and explicit beamforming. 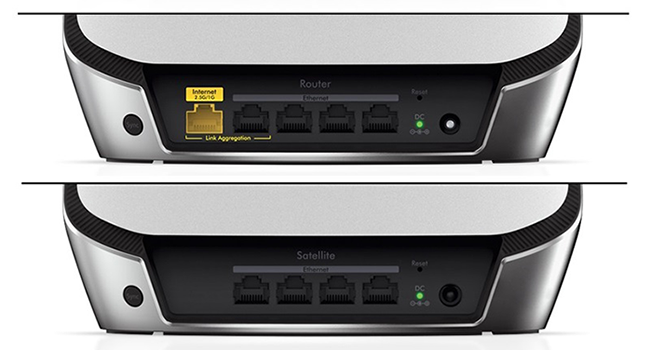 Such is the emphasis on Wi-Fi performance that the RBK852's physical connections feel relatively simple by comparison. Both units are outfitted with a connector for a 42W wall plug and four Gigabit Ethernet ports, while the router also touts a 2.5G WAN port for hooking up to your service provider; hats off to those of you with a broadband connection fast enough to make full use of said port.

Are there any obvious shortcomings? Well, there are no USB ports for attaching storage or printers, and as broader criticism of networking equipment in general, it's a shame that ageing 1GbE ports continue to be commonplace. Heck, it probably hasn't escaped your attention that on paper the RBK852's LAN ports are the bottleneck when it comes to raw throughput. 2.5GbE needs to become the minimum standard sooner rather than later, particularly at these price points.

Netgear has opted to keep the focus firmly on Wi-Fi, and to that end the Orbi system delivers on its promise of streamlined setup and seamless coverage of large homes up to 4,000 square feet. Getting up and running is as simple as plugging the two units in, downloading the Orbi app on your iOS or Android device, and then scanning the QR code on the base of the device. The subsequent wizard has everything up and running in under 15 minutes, while ensuring the latest firmware is installed during setup.

This no-fuss approach has pros and cons. Casual or inexperienced users may appreciate the easy-to-use app, however enthusiasts with networking know-how may lament the absence of more advanced settings. Netgear's app works well enough, and is useful for simple tasks such as rebooting, checking connected devices or running an Internet speed test, but it does feel sparse, and the prompts to purchase add-ons can seem galling on a £700 product.

Netgear suggests another £36.99 to extend the warranty period from one year to three (or £89.99 with extended support), and the advertised Armor security suite, powered by BitDefender, is only valid for a year, with renewals then charged at a further $70 per annum. For the fee you gain automatic blocking of known phishing websites, instant alerts to your smartphone whenever a threat is detected, as well as the ability to install BitDefender Security on your Windows, macOS, Android, and iOS devices. 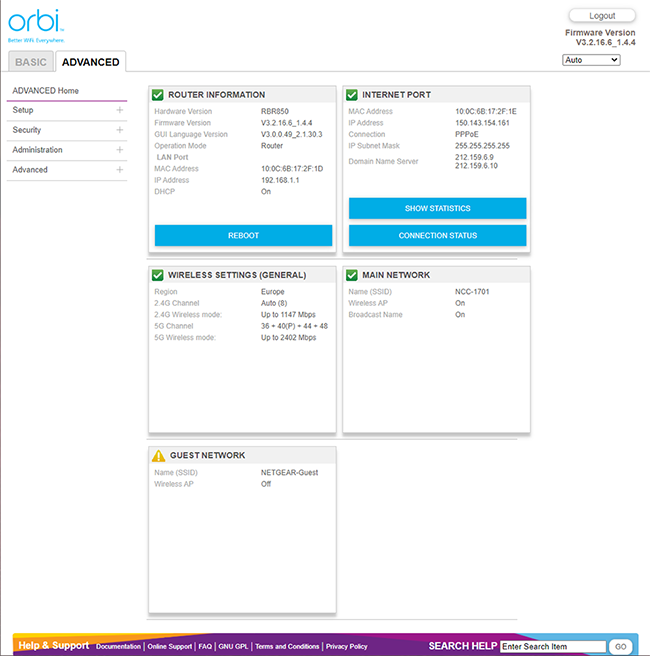 Those who prefer to take full control over proceedings can skip the app altogether and revert to the web-based admin panel. Netgear's interface is relatively basic - the likes of Synology have shown that network software can be much more inviting - but most of the features you'd expect to find are easy to locate. These include DMZ server, DHCP IP reservations and port forwarding, but parental controls are conspicuous in their absence, while the Quality of Service page offers only a speed test and no means of traffic prioritisation.

Netgear's software experience leaves room for improvement, but the Orbi system is all about souping up the home Wi-Fi experience, and on that front it represents a significant upgrade over a regular router.