There's a new four-bay Synology NAS in town. Dubbed the DS920+, this 2020 iteration takes up the baton from the popular DS918+ and has its sights set on becoming the de facto storage server for home enthusiasts and small businesses looking to streamline their data. 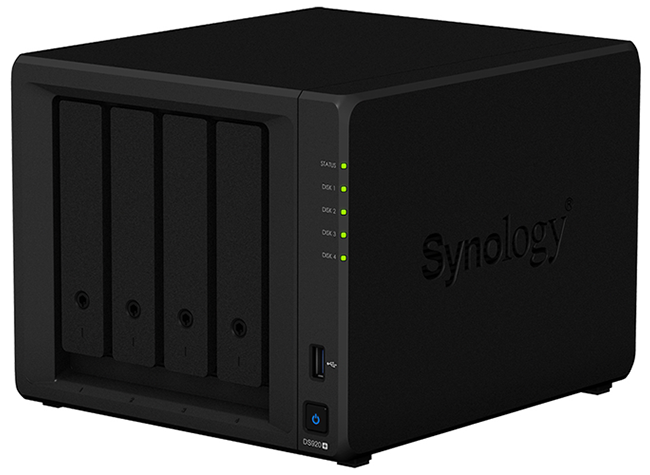 A £520 price tag is consistent with the outgoing model, and so too is the chassis, which has been around for a number of generations. Synology's 166mm x 199mm x 223mm frame still looks tidy enough, but the plastic drive trays are starting to feel relatively basic, and connectivity, which we'll come to shortly, isn't as forward-looking as we'd hoped.

What has changed is the internal combination of CPU and memory. Whereas the three-year-old DS918+ married an Intel Celeron J3455 processor with 4GB of DDR3-1600, the DS920+ nudges things forward through a combination of Intel Celeron J4125 and 4GB of DDR4-2666. Quicker memory is always welcome, and the updated quad-core Intel CPU retains a 10W TDP while doubling the amount of onboard cache from 2MB to 4MB and increasing boost frequency from 2.3GHz to 2.7GHz.

Do also note that while the onboard memory is soldered, an accessible SO-DIMM slot leaves some room for expansion. Synology's official specification lists a maximum memory capacity of 8GB (4GB + 4GB), presumably to prevent cannibalising sales of higher-end units, but owners have already demonstrated that higher-capacity sticks appear to function just fine. 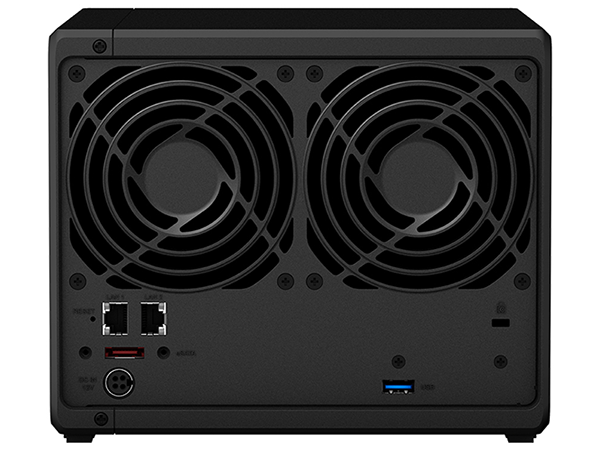 Quicker under-the-hood components should make sensible upgrades, yet they are hampered by the fact that Synology has decided against equipping the DS920+ with improved I/O. The selection of two USB 3.2 Gen 1 ports (one on the front, the other around back), eSATA for connecting a five-bay DX517 expansion unit, and a pair of Gigabit Ethernet is in our estimation a shortcoming at this price point.

Though the dual-port Ethernet setup does allow for link aggregation and a theoretical 2GbE via a managed switch, we're starting to see 2.5GbE ports appear on more hardware, and in mid-2020 it is a shame this potential bottleneck has not been addressed. Readers well versed in NAS solutions will note that rival off-the-shelf units in this segment now tend to offer 2.5GbE as standard, as well as potentially useful value-adds such as direct HDMI output and an IR receiver. None of those goodies are present here.

Continuing the feel of familiarity, dual 92mm rear exhaust fans keep the NAS in good health, and on the base are two removable covers revealing access to a pair of M.2 expansion slots. These still can't be used to increase the size of the storage volume - the slots are reserved exclusively for caching purposes - but Synology's commitment to modernising servers with solid-state storage is reflected by the launch of the firm's own line of compatible SSDs in a choice of 2.5in SATA or M.2 NVMe form factors.

Synology was kind enough to send a 400GB SNV3400 M.2 drive with our review unit. Employing a Phison PS5012-E12DC PCIe Gen 3x4 NVMe controller, the drive touts sequential read and write speeds of 3,100MB/s and 500MB/s, respectively, with a 500TBW endurance rating equivalent to 0.68 drive writes per day. A capable drive for caching purposes, and the £140 retail price is comparable to NAS-specific SSDs such as the Seagate IronWolf 510.

Setting up the cache is a cinch, though there are a couple of important provisos to be aware of. Firstly, a single SSD will function as a read-only RAID 0 cache; for a read-write cache, two SSDs must be configured in RAID 1 to ensure data integrity in case of a drive failure. 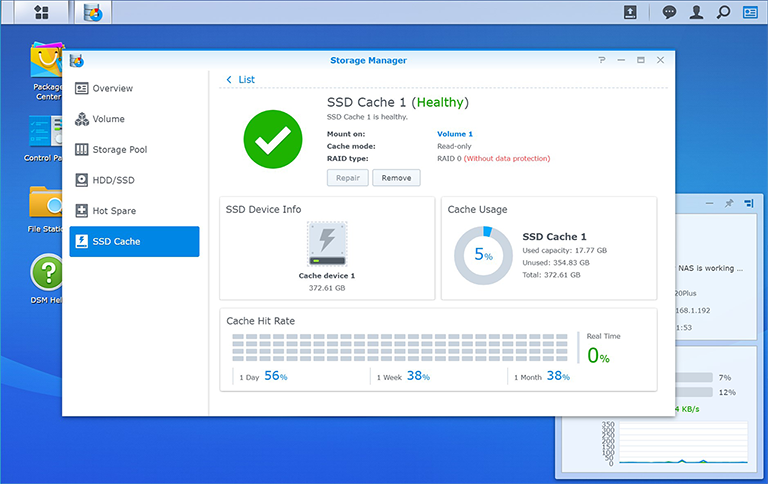 Secondly, the nature of caching frequently-accessed data is such that certain usage scenarios will benefit, while others will see little or no improvement. Applications such as databases and mail servers with repeatable workload patterns are likely to witness healthy gains, while large sequential operations will tend not to demonstrate a genuine advantage. In short; for home enthusiasts adding an SSD cache is unlikely to benefit a Plex media server.

Would we trade caching support for faster Ethernet ports? For our use case, probably so, but would we trade Synology's excellent DiskStation Manager operating system? That's a tougher call. Though competing software solutions are closing the gap, Synology's OS remains the standard bearer in terms of presentation and ease of use on a turnkey NAS.

If NAS boxes were smartphones, Synology would represent iOS while the likes of Qnap would represent Android. The latter may technically be more powerful, and typically offers greater hardware bang4buck, but the former is still hugely popular with a fan base that appreciates the software and wouldn't want to look elsewhere. It just works. 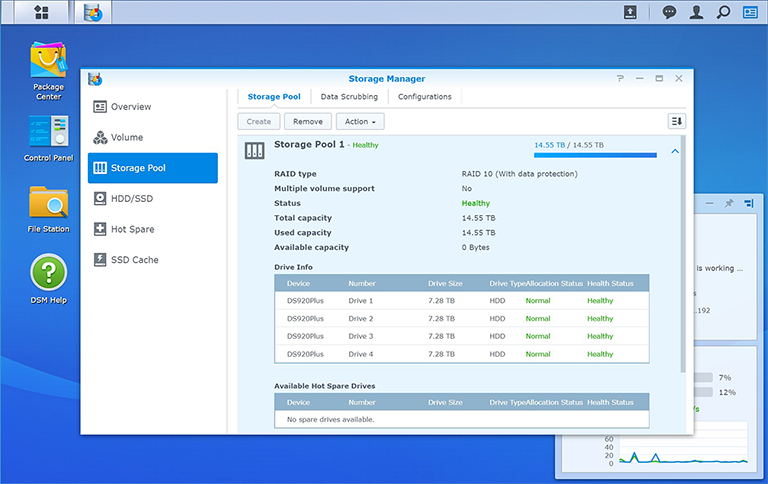 Whether you're contemplating a media server for your home entertainment, or a file server for multiple employees in the workplace, DiskStation Manager has you covered, and you don't need an IT expert to get up and running. Useful features such as Synology Hybrid Raid take the guesswork out of RAID configurations while allowing for mixed drive capacities, backup choices are comprehensive, and with an Intel processor at the helm there's greater potential for virtualisation through Docker, available from the well-stocked list of add-on packages.

DiskStation Manager remains the key attraction, and for those wanting to try before they buy, a live demo of the OS is available at demo.synology.com.