So much attention is paid to the panel itself that it is easy to overlook overall quality and implementation. Many monitors belie their underlying goodness with staid designs that lack the requisite curb appeal when putting together a showstopper build. If you'd prefer a panel that both plays well and is dressed to impress, take a closer look at AOC's Agon PD27. 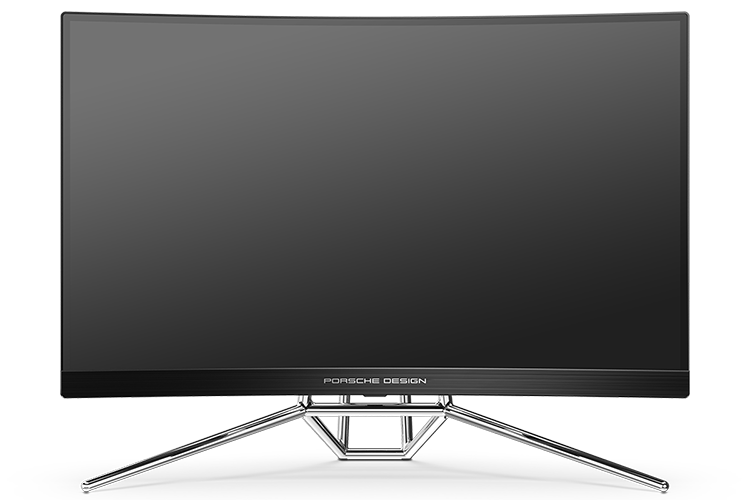 Designed in collaboration with Porsche Design, this £600 monitor lends a more elegant aesthetic through two core aspects; a subtly curved 27in panel, and a stainless steel stand inspired by the roll cage of a Porsche 911 RSR. It is certainly a striking piece of kit, and in our estimation a much more attractive proposition than the gamer-orientated designs we've grown accustomed to.

Thin bezels on the top and sides provide a modern feel, a distinct 1000R curve enhances the feeling of in-game immersion, and the PD27 thankfully isn't a case of style over substance as the VA panel ticks a lot of the right boxes for the target audience. The headline specs include a 2,560x1,440 QHD resolution, a 0.5ms MPRT response time, 550-nit peak brightness and a super-fast 240Hz refresh rate with AMD FreeSync Premium Pro adaptive synchronisation in the 48-240Hz range.

Nvidia users needn't worry as synchronisation works just fine through the G-Sync Compatibility program, and though VA panels do have their unique quirks - viewing angles aren't as forgiving as IPS and you do get some unwanted black crush - the overall feature set plays extremely well with fast-paced games. FPS and racing titles in particular looks truly impressive at 240Hz on a curved 27in QHD screen, and even the Windows desktop feels considerably smoother than regular 60Hz. We're fans of higher refresh rates, but is 240Hz worth the premium over, say, 144Hz? That's debatable as the perceivable benefit is diminished as you climb further up the scale.

We'll dig deeper into the panel's capabilities in the upcoming benchmarks, but first let's talk more about the pros and cons of the eye-catching design. In the plus column, the implementation of the unorthodox stand hasn't come entirely at the expense of versatility. There's still 150mm of height adjustment, the panel can swivel 15° in either direction, and there's the ability to tilt it back up to 21.5°.

There's also a helpful joystick in the bottom-right corner for navigating the OSD, and connectivity is well catered for with two HDMI 2.0 ports, two DisplayPort 1.4, four USB 3.2 Gen 1 Type-A, headphone and microphone jacks, and a connector for the external power brick. We suspect most gamers will be employing headphones or dedicated speakers, yet it is good to see AOC include a decent pair of built-in stereo DTS speakers. True, they're severely lacking in bass, but they're a noticeable step-up from basic integrated speakers and retain good clarity at modest volume.

As for the downsides, there are a few to be aware of. AOC's slick stand can't be removed in favour of a VESA-compliant alternative, the roll-cage design doesn't do much to hide cabling, and the protruding feet take up a significant amount of desktop space, measuring 550mm from left to right, and 320mm from front to back. Minor niggles in the grand scheme of things, and perhaps our biggest gripe is that the OSD has been stylised into a clunky mishmash of menus that is far from intuitive to navigate. 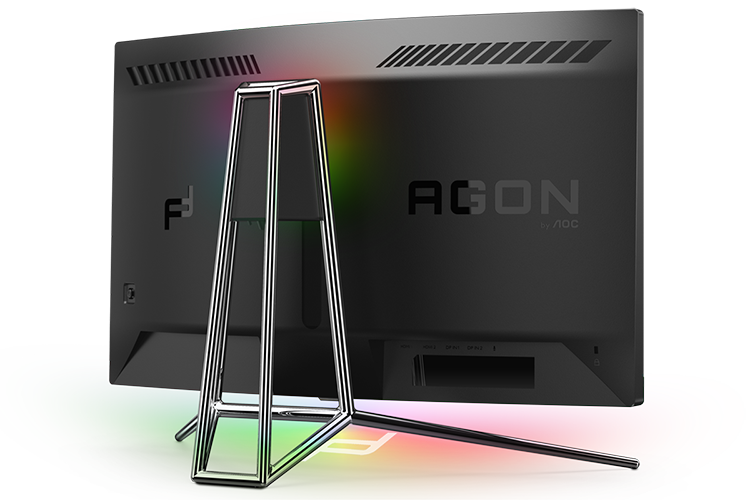 Users do get a tidy wireless remote that's helpful for switching between presets or quickly toggling certain settings, but even so we'd much prefer a simpler OSD. Last but not least, even traditionally elegant Porsche Design products aren't immune from the RGB incursion.

There are LEDs behind the panel directed down toward the desk, and in all fairness, the effect works quite well by reflecting off the silver legs for that extra bit of dazzle. The beamed company logo does nothing for us but can thankfully be disabled independently of the RGB, and while you're at it, be sure to turn off the boot-up sound which we find unnecessarily tacky.