Working from home? Found the time to get back into gaming? Generally just bored of recurring lockdowns? There are many reasons to consider upgrading your PC experience in 2021, and it is no surprise that sales of tech products have skyrocketed in recent months. A shiny new display is as good a starting point as any for those contemplating pushing the boat out, and if that sounds like you, take a closer look at AOC's £899 Agon AG493UCX. 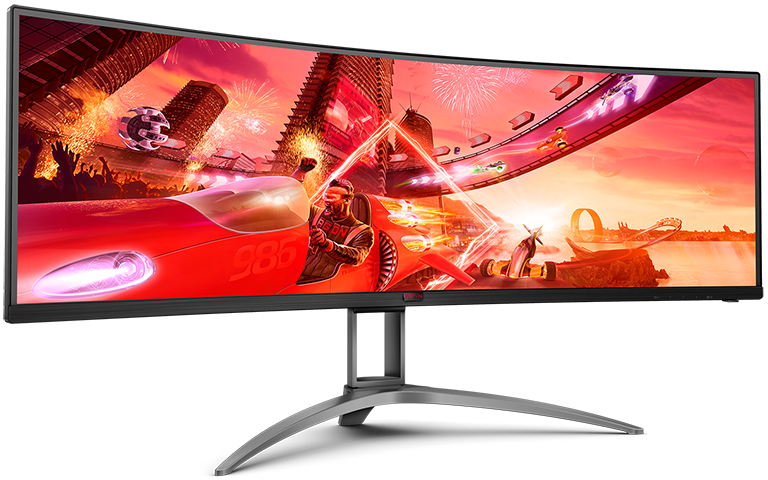 Adopting a mega-wide 32:9 aspect ratio, this 49in giant touts a 5,120x1,440 resolution that bodes well for both productivity and immersive gaming. It is effectively two 2,560x1,440 QHD panels without a seam, and you really have to be sat in front of the display to appreciate just how wide it is. Taking it all in without having to turn your head is nigh on impossible, and you'll certainly need a good-sized desk to accommodate the panel, which measures almost 1.2 metres from side to side.

Is it too wide? That's debatable, and we'll come to that shortly, but we do like the fact that AOC's design and presentation does a decent job of streamlining the bulk. The brush-effect bottom bezel is a nice touch, the mirrored Agon logo at the front isn't too distracting, and at first glance you wouldn't necessarily deem it a gaming display. There are no RGB lights nor plasticky headset holders, and our only criticism regarding build is that a black border above and to the side of the panel prevents the AG493UCX from appearing frameless; the actual display starts a centimetre from the edge.

Despite its enormous footprint, there's a beauty to the AG493UCX that we didn't expect. This can be attributed to a distinct 1800R curve that envelops the user's field of view, and a similarly curvy three-legged VESA stand that sits elegantly while helping prevent unwanted wobble. Versatility is decent, too, with 15° swivel, 3.5° tilt and 100mm of height adjustment. Just be sure to have an extra pair of hands during setup as the near-15kg weight is no trifling matter, and we'd recommend plugging in cables prior to attaching the stand - reaching the ports when the monitor is in situ is easier said than done.

When it comes to cabling you can expect a useful array of options. Five inputs are available - 2x HDMI 2.0, 2x DisplayPort 1.4 and 1x USB-C - and the USB supports 65W power delivery, allowing a laptop to output to the display while charging simultaneously. The power supply is built in, there's a customary 3.5mm audio jack, and to top it all off AOC has integrated a KVM switch, giving the user the ability to share peripherals from the three USB Type-A ports between two connected PCs. All that's missing is an Ethernet link to feed wired web access among multiple PCs.

AOC has thought most things through, and as expected on a screen of these proportions, there's full support for PbP (Picture by Picture). Being able to display two 16:9 2,560x1,440 sources side by side makes implicit sense, and with the KVM you can use one keyboard and mouse set for both systems; handy if you have, say, a laptop and desktop hooked up at the same time. 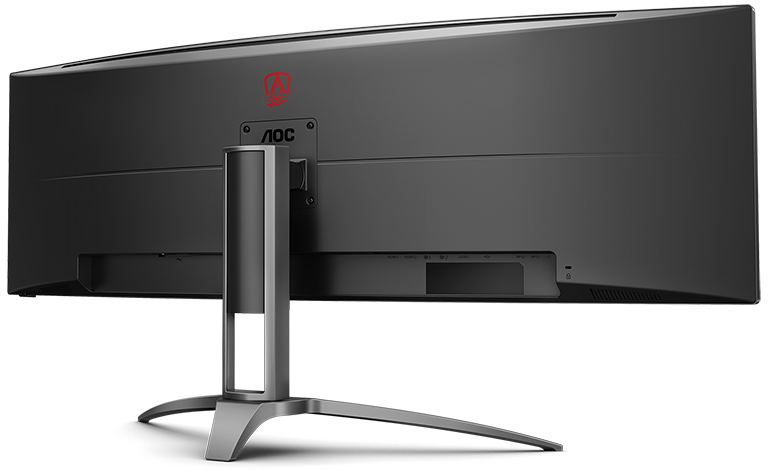 Another natural benefit of the form factor is that the 5W stereo speakers are so far apart they deliver a wide soundstage that's better than expected for everyday use. There's even a bundled remote to save having to reach for the tactile buttons in the bottom-right corner to adjust volume, yet while it's helpful being able to control various settings from a distance, AOC's on-screen GUI isn't the most user friendly. Designed with gamers in mind, the interface is overly reliant on large graphics and is cumbersome to navigate; simple lists, we feel, would prove far more intuitive.

There isn't a great deal more AOC could do in terms of integration at the £899 price point, but how does the panel fare during real-world use? Well, there's plenty of good, and a couple provisos to be aware of. Starting with the provisos, and stating the obvious, not all content is well suited to a 32:9 aspect ratio.

Attempt to watch movies and you'll have to put up with large black bars to the sides, websites aren't formatted with such vastness in mind, and you'll occasionally run into games that simply don't support a native 5,120x1,440 resolution. Heck, even those that work tend to ignore the aspect ratio on menus and during cut scenes, and if gaming is your primary concern, expect to need a high-end graphics card. Though not quite as demanding as 4K (8.3m pixels), driving the AOC's 7.4m pixels with high quality settings is going to warrant some GPU grunt. 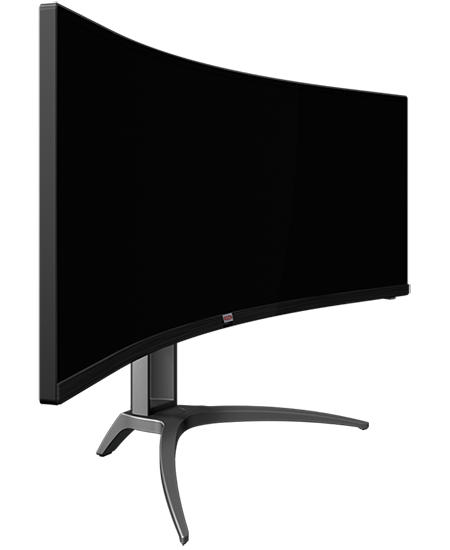 If none of the above give you pause for thought, the AG493UCX can be a genuine source of satisfaction. AOC's 49in panel touts 550-nit brightness with DisplayHDR 400 certification, a 3,000:1 static contrast ratio, 178° viewing angles, a 1ms MPRT response time (4ms GtG) and a 120Hz refresh rate. Not quite as expansive as the dearer 240Hz Samsung Odyssey G9, yet there's enough on offer here to ensure an enjoyable experience most of the time.

FreeSync support and G-Sync compatibility in the 48 to 120Hz range ensures silky-smooth action, and though ghosting is prominent at low framerates, there's no denying that the right games look exceptional at 32:9. Forza Horizon 4 is incredible, managing your empire in Civ VI takes on a whole new meaning, and certain FPS titles utilise the space to good effect. It is inevitably a double-edged sword as some games don't work at all well, but with the right title the AOC can elevate the gaming experience in a way no 16:9 display can match.

Gaming is without a doubt a star attraction, yet after a week or so of use, we're of the opinion the AG493UCX is equally satisfying for productivity, if not more so. There's a huge amount of real estate for working with multiple windows, editing long timelines or expansive spreadsheets requires little or no horizontal scrolling, and given the format, it's a shame AOC doesn't include a window management utility. For Windows 10 users, Microsoft's own PowerToys FancyZones utility is a must for managing your workflow.