ASRock has started to build momentum around the Phantom Gaming (PG) range of motherboards that are now available for both leading AMD and Intel mainstream chipsets. We took a look at the AMD X570 version right over here. 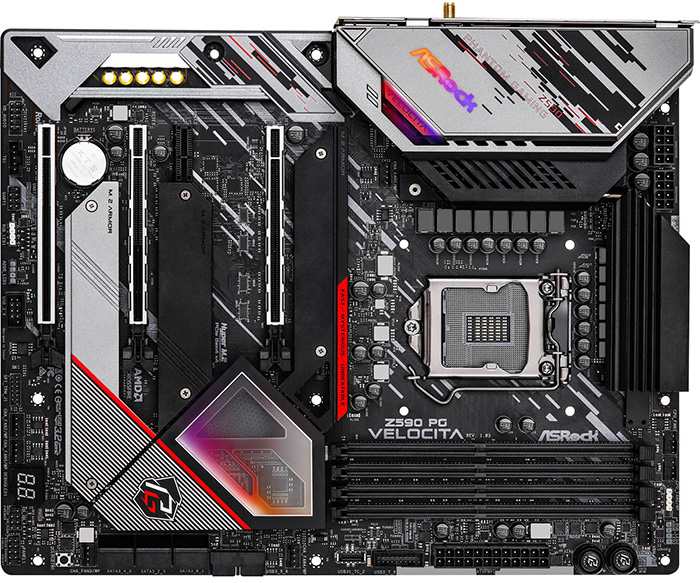 Z590 PG Velocita continues the Marmite colour scheme deliberately chosen to stand out. It's not as garish in real life, and actually rather attractive when fully built up, but this is certainly not a board for the minimalist. As usual, the topmost M.2 slot is PCIe 4.0 x4 and only works with an 11th Gen CPU in the socket.

Though this board doesn't offer the highest level of electrical supply in its category, having 12 phases - six doubled - dedicated to the CPU, plus another couple for the SOC, are absolutely more than enough. There's 600A for the just the chip. At 1.2V that's 720W on tap right there. No complaints on the quality of the underlying Vishay/Intersil component selection. Also, no complaints on the cooling around the socket; the two metal, finned heatsinks are amongst the thickest we've seen, and both are connected via heatpipes. If that isn't enough - and trust us, passive cooling is fine - ASRock bundles in a small VRM fan into the package.

A few interesting design choices, too. ASRock provides a screw-in metal brace designed to keep extra-long cards secure. The board's solitary USB 3.2 2x2 port is available via the front-panel connector; there's no matching 20Gbps port on the back, which seems strange on a £275 board whose chipset supports it. The exposed components on the chipset are kind of cool but rendered practically unviewable when a graphics card is in place. 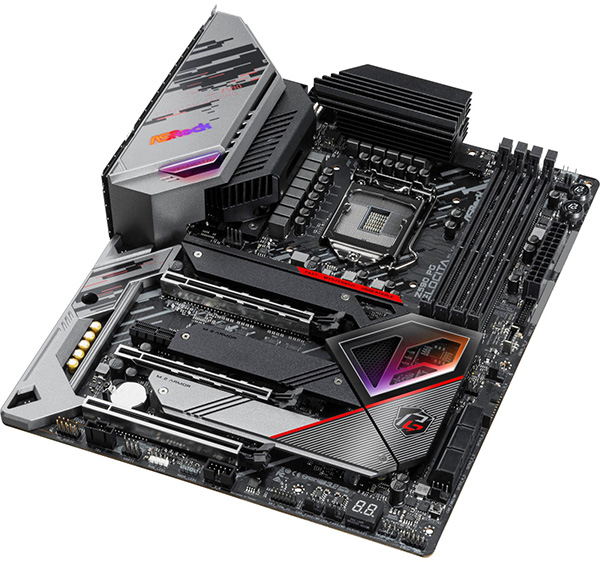 The other two M.2 slots both run off the chipset and therefore offer PCIe 3.0 x4 transfers; AMD's X570 is a better bet if you need greater access to PCIe 4.0 storage. All three slots are clad with heatsinks, all with thermal tape, but they don't feel as well put together as, say on the Asus Z590-E Gaming WiFi.

What else is missing? There's no dual BIOS and audio is from the last-generation ALC1220, if that matters to you.

We feel ASRock cheapens out a bit on the I/O panel. Killer is tasked with the 2.5G LAN (E3100G) and WiFi 6E (AX1675x) while the second LAN is only Gigabit from Intel. We understand it is all one company now, but many enthusiasts prefer an all-Intel networking arrangement.

Only two of the USB ports - the grouped-together Type-C and Type-A on the right - are 10Gbps. The remaining six USB 3 are 5Gbps; shouldn't they all be 10Gbps by now, plus another 20Gbps on the back?

The latest BIOS, P1.30, supports Intel Adaptive Boost Technology. There is an AVX wrinkle in the mix, which we'll get to in the performance section. Though the BIOS is clear, fast and informative, it is time ASRock moved over to FHD from 1024x768.

One can readily see where ASRock has had to cut specification corners in order to hit that £275 price point. But can the board do better in the performance tests? Let's find out.