NZXT may not be the first name you think of when deciding on motherboards - it's more famous for chassis, coolers and PSUs - yet it has one of the most distinctive and good-looking Intel Z490s on the market. Designed to offer a super-clean aesthetic by employing a number of metal shrouds and covers for a unique look, NZXT is now bringing the same style philosophy over to the AMD AM4 camp with the release of the N7 B550.

The name gives the chipset away, and like the Intel version, is available in either black or white shrouding. Priced at $229 (£200), we have the former in for review today.

We reckon it's a sage move to opt for B550 instead of the dearer X570 because it makes the board more accessible to a wider range of buyers. B550 offers primary M.2 and graphics PCIe 4.0 goodness we have come to expect without the need for an aesthetic-breaking fan on the chipset. 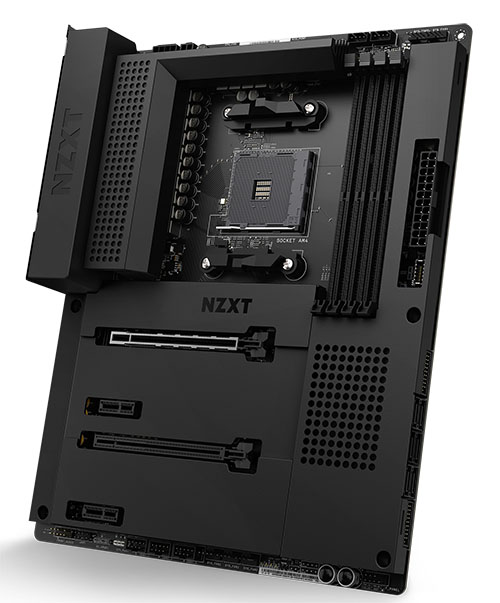 The N7 B550 looks even sleeker than its Intel Z490 cousin because although it uses the same metal covers and vents, there's even less silver around the CPU socket. This is one good-looking piece of kit with minimal interruptions. In fact, only a few red status LEDs at the bottom indicate that it's booting and they switch off once POST has been achieved. If Batman had a board, this would be it.

NZXT actually boosts this board's electrical performance compared to Z490, which is strange yet more than welcome. Built on a six-layer PCB, there's a 12+2-phase supply with 50A on each. Put simply, you cannot run enough voltage through, say, a Ryzen 9 5950X for the board to be the limiting factor. Unlike some with connected heatpipes, a large, L-shaped metal block cools the power delivery. Truth is even this is overkill given the intended purpose.

That said, looking closer, the numerous circles around the left portion of the upper heatsink are mostly superfluous and, if anything, impede the underlying heatsink performance. Without them, however, the board wouldn't look as clean and crisp.

Though free of RGB on the N7 B550 itself, NZXT provides headers for 5V ARGB, 12V RGB (bottom of PCB), two NZXT-specific RGB (top of PCB) along with seven sensibly-placed fan headers that are best controlled by the company's CAM software. 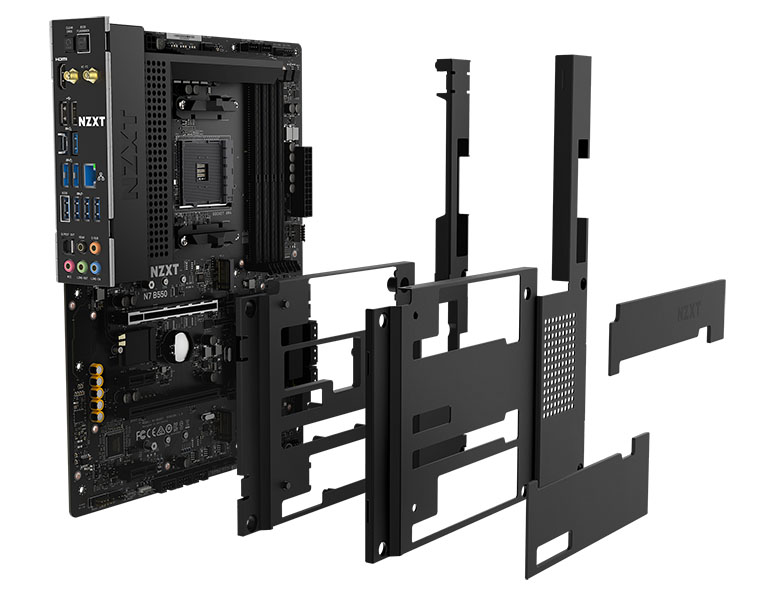 There's little to quibble about with the layout. We like Type-C for front-panel connection, there's six rotated SATA ports and more traditional front-panel USB connectors, and power/reset buttons are always welcome.

This exploded view shows how NZXT constructs the shrouds. The top (PCIe 4.0) and bottom (PCIe 3.0) M.2 magnetised covers pull away with a tug to reveal both slots. Perfect for hiding the drives away, one downside is they don't readily function as heatsinks because there's a gap between cover and drive. A thick wodge of TIM wouldn't go amiss.

NZXT's choices mean there's two x1 PCIe slots and another x16 (Gen 3 x4 speed), with the trio connected to the chipset. That's fine for a B550 board. Keeping costs in check, there's no full-coverage rear metal brace we sometimes see on pricier models. 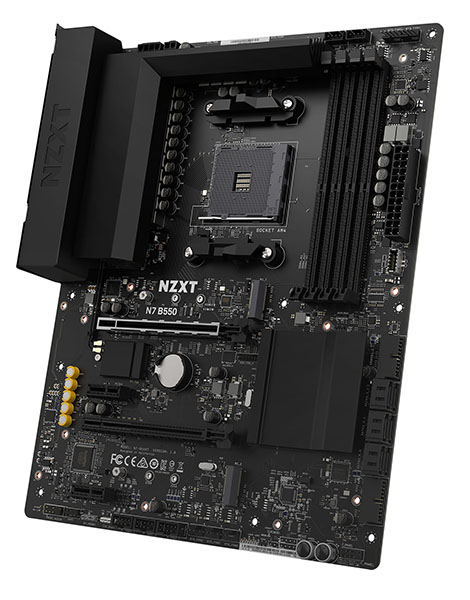 Stripped away, N7 B550 starts to look like a regular ATX motherboard again. There is nothing obviously missing from the specification sheet for a board at this price point, and it is most reminiscent of Gigabyte's Vision B550 in presentation, though NZXT's hides away more of the underlying components.

In terms of layout and ease of building, there is nothing of substance we would change.

Around back, with due note that users may want to pair this board with a chip housing integrated graphics, there's HDMI. Others have DisplayPort as well, so it's something to consider. There's no USB 3.2 Gen 2x2 (20Gbps) support here, but being fair, no competitor board has it either. Networking is strong through a 2.5G Realtek LAN and, unusually, WiFi 6E support through an Intel AX210 chip; we usually see it higher up the range or on Z590 boards.

NZXT could certainly do with getting rid of knackered USB 2.0 and adding a further couple of 10Gbps ports.

One would expect the BIOS to be lacking polish but that's not the case. The eight-tab approach works well, flashing to a new BIOS is straightforward, and it's clear that NZXT has partnered with motherboard specialist ASRock to build and firmware the N7 B550.

Offering a cleaner look here, the general firmware, with Resizeable BAR support, is similar to how ASRock does things. That's a plus point in our book. Within Windows, however, NZXT's overarching CAM software takes over.