24 chips rolled off the Intel 10th Gen Core line a couple of weeks ago. Chief amongst them is the Core i9-10900K, representing the first time the chip giant has offered 10 cores and 20 threads in a mainstream package. Read all about it over here. A raft of new motherboards is necessary as Intel moves socket support from LGA 1151v2 to LGA 1200. Enter Z490.

Z490 is an incremental upgrade over its immediate enthusiast predecessor, Z390, and main advantages are faster official memory support, optional 2.5G Ethernet, and WiFi 6 AX201 wireless. USB remains at the same speed, albeit now with the newer naming structure of USB 3.2 Gen 2x1, while Intel's latest processors are stuck on PCIe 3.0 for expansion and storage. A shame that, particularly for creative types. 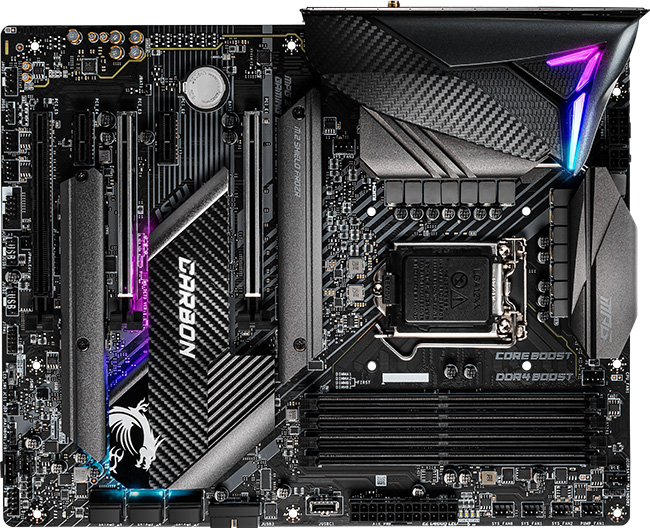 The ATX-sized Gaming Carbon WiFi has always been a good seller through generations as it employs a number of manufacturer-specific features without breaking the bank. It sits below the Z490 Godlike, Ace, Unify models but above the Gaming Edge, Tomahawk, Gaming Plus, and plain old Pro in the pecking order. The equivalent Z390 model is available for around £200; this one tips the scales at £260 or so, which feels expensive given there's not that much new.

Cooling around the socket appears the same as the last generation with a large, integrated I/O shield obscuring the heatpipe-connected heatsinks. Power is sourced from a 12-phase supply, plus an additional two for the memory, and there's the same amount of room around the CPU socket. Remember you can use existing LGA 1151 coolers here, too.

The board features proper heatsinks for both available M.2 slots. They're the same distance apart as on Z390, and both sport PCIe 3.0 x4. It's a shame that a £260 board doesn't have a third slot, though the blame for that has to fall at Intel's door because of restricted lane usage.

It's also worth noting that M.2 cooling is only available on the upper side, directly underneath the heatsink. Double-sided drives therefore don't benefit as much. Only two of a Corsair MP600 2TB NVMe drive's four upper-side chips make a discernible mark in the lower M.2_2 heatpad, so coverage is not all that.

As enthusiasts, we miss the debug display and onboard buttons for power, reset and clear CMOS - that space is taken up by four fan-headers. The front-panel connectors are bereft of the usual colour coding, too. On the plus side, there's ample room between the CPU socket and primary PCIe x16 slot, and the arrangement is such that the graphics card's fans blow air onto the PCH heatsink, keeping it nice and cool, as you will see later on.

Upper RGB lighting is the same but the lower half has been moved to under the chipset rather than a strip running down one side of the rear; we reckon it looks better this way because it ought to provide more even lighting in your case. A three-slot PCIe x16 arrangement remains, catering for two-way SLI or three-way CrossFire, but do remember that lane limitations rear their head by imposing x8/x8/x4 if all three are filled. As before, the top slot is connected directly to the CPU's lanes whilst the lower two pull theirs from the chipset. 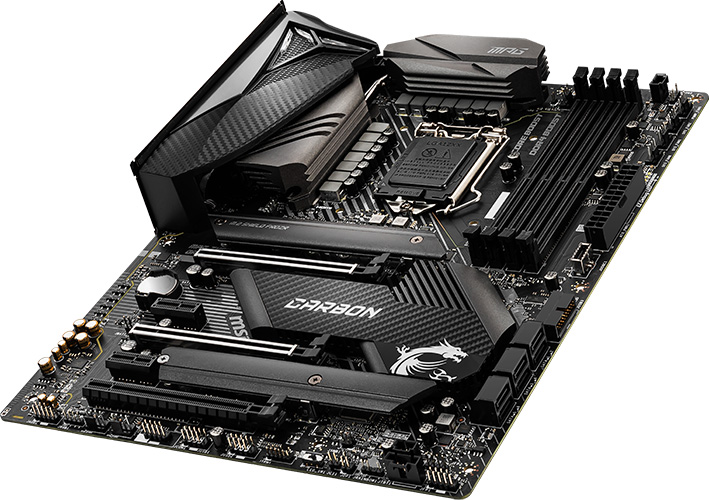 Gigabit LAN is replaced by 2.5G from Realtek, which you will find on every Z490 from MSI's stable. The same can be said for front-panel Type-C. WiFi, meanwhile, uses the newer Intel AX201 chipset instead of AC-9560, raising peak speeds from 1.73Gbps to 2.4Gbps. All good, incremental improvements.

It's no surprise to find the I/O panel remaining similar through generations. The USB Type-C port caters for that faster 20Gbps speed and there's one more USB Type-A port, too. Having only seven USB ports on the back feels a bit stingy when there's more available. Other than that, it's good to see MSI retain DisplayPort and HDMI outputs for those running Core processors with integrated graphics.

Appreciating the £260 price point, common sense tells us that it ought to be paired with a processor costing at least as much, preferably unlocked for maximum performance. To that end, the Core i5-10600K is a good bedfellow, though some may go all out and opt for the Core i9-10900K.