Only the AMD TRX40 chipset has access to the fastest consumer CPU in the world. It's no surprise to find that compliant motherboards start at £400 and rise to £900. At the extreme end of the market resides the aptly-named Gigabyte TRX40 Aorus Xtreme - an £830 monster with what the company calls unrivalled power delivery.

Those looking at this kind of spend will naturally also gravitate to the super-deluxe boards from MSI (Creator TRX40) and Asus (Zenith II Extreme Alpha) priced at £670 and £900, respectively. As we have previously reviewed both, this Xtreme can be compared fairly. 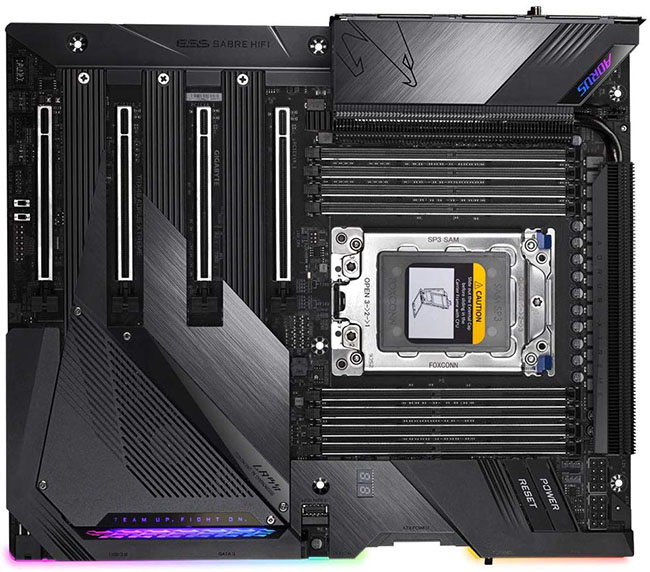 It only makes sense to build such boards using large form factors, and this one tops the lot by implementing XL-ATX (325mm x 275mm). Gigabyte puts size to good use by opting for a no-nonsense, minimalist build. The immediate good stuff is a) the rotated ports and fan headers, particularly the 24-pin ATX b) double-width PCIe x16 slots c) minimal RGB intrusion, residing on the edges and d) a true 16-phase (70A) supply.

Much is spoken about power-delivery systems, particularly on HEDT hardware which accommodates up to 128 threads in one socket. The prosaic truth is that, even for an overclocked 3990X pulling 500W through the pins, each of the aforementioned boards are overkill. We can't see how you'd get anywhere near their capacity unless adding cruel voltage via LN2 cooling. Gigabyte deserves credit for not using doublers (MSI) or teamed architecture (Asus) here, but the real-world benefits are negligible. It's like running a 400W PC with a 1,000W PSU - there's more than enough power on tap.

That said, the Xtreme's heatsink arrangement isn't as robust as Asus'. The pair around the CPU socket connect to one another via an 8mmn heatpipe, but there's no further linking down to the chipset. On closer inspection, however, there's a small fan inside the bottom edge of the I/O-side heatsink, helping keep things cool(er). It will be interesting to see how VRM temps compare amongst these premier TRX40 boards.

The Xtreme doesn't benefit from the lovely LiveDash display present on the rival Asus - it really is rather good - but still has a debug LED integrated over the angled connectors. Being minimalist, the power and reset buttons also form part of this ensemble, rather than be regular buttons further down. Having lots of metal continues over the back as the board features a full-sized brace that ensures excellent rigidity.

It's big on storage, too, as there are 10 SATA connectors down the side. That seems a bit much given the presence of four M.2 connectors each capable of housing NVMe or SATA drives. Not only that, but the package further includes a full-length, fan-cooled, add-in board (GC-4XM2G4) that can house a further four PCIe 4.0 M.2 drives through the PCIe x16 interface. It's a great addition, save for the 'Team Up, Fight On' branding near the fan. All told, one can run 17 drives out of the box. Impressive.

The I/O section is pretty standard for a high-end board. It's worth drawing attention to the dual Gigabit ports powered by the Intel X550-AT2 10-Gigabit controller - the first time we've seen this. As expected, there's 802.11ax WiFi, again from Intel, along with decent sound courtesy of the ALC4050H codec and ESS Sabre 9218 DAC (front-panel), which is a step up from most.

Asus has its LiveDash display and 90A-per-phase capability as key standouts. The Gigabyte Aorus Xtreme, meanwhile, carries minimalist looks, bulletproof build, that excellent M.2 expansion card, and a true 16-phase power supply. It's arguably a more well-rounded board than the Asus, and would suit creators as much as enthusiasts. In that respect, its immediate competition is more the MSI Creator, which offers a similar feature set for £150 less, albeit in a package that doesn't look as good.

It's horses for courses, so let's run the trio of boards through our benchmark and then evaluate just how good this Xtreme is.