Asus has quietly slipped in an upgrade for its premier 3rd Gen Ryzen Threadripper-supporting Zenith II Extreme (Z2E) motherboard by releasing the Alpha (Z2EA) model to coincide with the 64-core, 128-thread 3990X monster from AMD.

The Alpha is similar to the incumbent Extreme from a general features and layout point of view, so why the need to release a new board? Handling extreme amounts of wattage, that's why, as Asus has reworked the power-delivery system to handle 1,000W loads.

That's not to say the original Extreme is lacking for everyday use, but when one runs the 3990X at, say, 3.7GHz and 1.075V - considered a trivial overclock for the enthusiasts - system-wide power consumption spirals past 700W. Now, imagine the kinds of wattages extreme overclockers will generate. The Z2EA caters specifically for them.

It's worth us taking a closer look at the motherboard as we didn't review the standard Z2E, pointing out the improvements in the power-delivery system along the way. 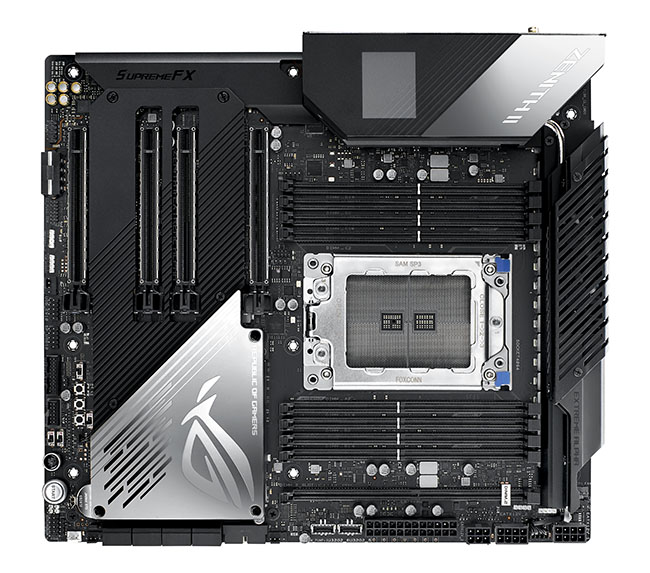 On first glance, very little has changed aesthetically, of course. The only way to tell this new sTRX40 board from its non-Alpha brother is by the small nomenclature addition to the VRM heatsink. It is otherwise identical from a layout, visible component, and features point of view.

That's no bad thing, actually. It's an absolute beast of a board that uses the eATX form factor to good effect. Massive power-delivery heatsinks, an integrated I/O shield, huge M.2 cooling, and a rear metal backplate combine to push the weight to a considerable 2.36kg, making it the heaviest we have ever tested.

The LiveDash 1.77in colour OLED screen integrated into the I/O section replaces the standard debug LED on most boards. We thought it a rather gimmicky addition when viewed on a spec sheet, but to our surprise, it's a decent value-add, reporting any temperature you assign via the relevant application in Windows. Easily visible through the side window of a chassis, it's a definite step-up from the competition.

Notwithstanding the eATX size, the DIMM slots are very close to the huge sTRX4 socket and also nestle by the VRM heatsink, so much so that Asus bundles in a dual-purpose screwdriver to pop the DIMM holders due to a lack of space. And if you're going to max out the full eight modules, we'd suggest going for an AIO liquid cooler instead of a hulking air heatsink.

Z2EA is also somewhat unusual insofar as it has a couple of fans built into the VRM heatsink. These are set to activate at 60°C by default, though that figure can be changed in gradual steps within the BIOS. Even when overclocked, our Ryzen Threadripper 3990X sample, pulling north of a system-wide 700W from the wall, failed to activate them.

This where the Z2EA separates itself from the original model which features 16 Infineon TDA21472 power stages rated at 70A in a teamed architecture that uses newer PWM controllers (ASP1405I or IR35201 by another name) in an 8+0 configuration. Each of these strict eight phases drives two power stages, giving the 16 in total. Cheaper boards use doublers from the PWM to power stages, which introduce potential delays on the signals culminating with inferior transient response. Gigabyte, for the record, is the only one to currently employ a true 16-phase architecture.

OK, so the Z2A's power delivery is fine for even crazy overclocking. This newer Alpha increases each stage's capability from 70A to 90A, but that feels like spec-sheet overkill than real-world use for 99 per cent of users. For example, the 3990X consumes 300A (CPU EDC) at 0.9V when under all-core load, leading to processor package power of 280W, correlating with the TDP. Ramping up the all-core speed to 3.7GHz and using a manually-inputted 1.075V - the most our AIO can handle - gets up to 350A and around 400W of CPU socket power. Point is, even at these settings, the VRMs are pushing out about 40W of heat and operating well within the original Zenith II Extreme's parameters.

What this all means is that you need to be pushing somewhere near 1,000W through the socket before the real-world benefits of the Alpha become apparent over the regular Extreme. That's possible, of course, with extreme LN2 cooling, so in a very roundabout way, the Alpha is the LN2 user's board; everyone else will find the Extreme, well, extreme enough.

RGB lighting, meanwhile, resides on the diagonal strips present on the I/O section, diagonally across the heatsink covering the M.2 slots, as well as on the right-hand side. The effect is as good as any, and if ever a motherboard felt and looked premium, the Z2EA is it.

The board is also strong in storage, accommodating five M.2 drives across four slots - the easily-accessible DIMM M.2 by the RAM holds two drives via a bundled, heatsink-clad card, there are two M.2 slots (and TIM) under that aforementioned black heatsink held in place by four screws, plus another M.2 on the back. Each slot connects to the system via PCIe Gen 4 x4, for decent bandwidth. Understanding how the chipset and CPU operate with one another, you'd want to use the processor-connected M.2 slots for primary storage.

There's very little to criticise if you fully appreciate this board's positioning and £800 price tag. 10GbE Ethernet is integrated, there's plenty of USB, including the fastest 3.2 2x2, dual BIOSes, a wide array of fan-headers, decent audio, and a bulletproof design.

The BIOS, meanwhile, remains solid and speedy compared to rivals. All told, if users were previously looking at the regular Extreme board for a 3rd Generation Ryzen Threadripper build, there's no reason why the Alpha isn't a better bet. It covers the base board's specification and extends the power-delivery system out far enough to appease even LN2-cooled exploits.

Let's roll some benchmarks and then pass judgement.