AMD released 3rd Gen Ryzen Threadripper CPUs in November 2019 to general performance acclaim. Boasting up to 32 cores and 64 threads at launch from the 3970X, we'll see a 64C128T monster next month.

These new chips and associated TRX40 platform is not for the light of wallet. The cheapest processor chimes in at £1,249, rising to £3,990 for the big beastie, while motherboards begin at £400 and financially escalate very quickly.

That said, most of the motherboard's goodness emanates from the chipset, so is there really a need to spend, say, £700 on a board? To that end, we're taking a look at the Asus Prime TRX40-Pro, priced at a more approachable £400, making it the joint-cheapest board available. 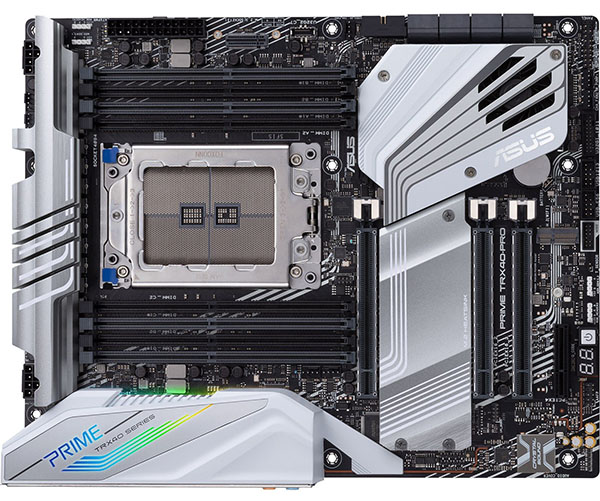 Unlike many other TRX40 boards, the Prime fits into a standard ATX (305mm x 244mm) form factor, which may be handy for smaller cases. The black-and-silver design aesthetic looks better in person, while RGB is mercifully limited to the integrated I/O cover.

The VRM-covering heatsink is a brute... in a good way. The brushed-aluminium block's 40mm height and 200mm width is amongst the very largest we've seen. It's not connected to any other heatsink, but that's not a problem as it's more than capable of pulling away heat from the 16-stage power-delivery subsystem comprising 60A Infineon TDA21462 integrated power stages. It's not a true 16-phase, however, as Asus uses eight ASP1405 (IR32201) doublers, yet there's absolutely enough power on tap to handle an overclocked Threadripper 3990X with ease. Asus has used this combination on a number of other high-end boards, too.

The heatsink design enables Asus to house 8-pin CPU connectors on each side. Cabling ought to be fine as most decent chassis offer cutouts by these sections.

Having such a large heatsink leads to some interesting design choices. The main x16 PCIe slot is very close to the left-hand memory, and given how big the socket is and how much power it can draw, the best way forward is with an all-in-one liquid cooler.

One obviously needs to remove the graphics card - obligatory on this chipset - to access two of the board's three M.2 slots. It's a shame that the covering heatsink is not attached to the chipset's for extra cooling, though it does at least have two strips of thermal tape pre-applied. From a style point of view, its top edge is a bit higher than the chipset's, meaning it looks odd. Having it fit absolutely flush would have been better.

The other slot is uncovered and situated below the third PCIe x16, though given its short length and stifling by the solitary PCIe x4 slot to the left, it's only useful for WiFi/BT duties. Actually, there is a fourth vertical slot by the 24-pin ATX, which is common on Asus boards, and the package includes a bundled metal bracket to hold it in place. Looks a bit weird when in a system, though.

We like the two-digit debug LED, onboard power and reset buttons, seven fan headers and dual Aura RGB headers, so where's the clear cutback when compared to £700 boards?

For starters, there's no integrated WiFi or Bluetooth. Asus also uses a single Intel I211-AT Gigabit Ethernet controller - most premium boards have two, one of which is either 5Gbps or 10Gbps - there's not as much USB (and no 3.2 Gen 2 2x2 controller), and we'd prefer a clear CMOS button on the back. Others also offer M.2 expander cards, OLED displays and over-the-top cooling. Is cleaving those features in the name of a much keener price a fair compromise? The answer is yes, especially if running it as a workstation-type board.

The BIOS meanwhile, is standard Asus. That translates to smooth navigation, decent fan control, and a solid array of tweaking options. By default, the small chipset fan is always on, but those who value absolute quietness can simply drag the Q-Fan curve to the right. Setting it to enable at, say, 80°C ensures that it remains off at all times, at the expense of raised heat around the chipset section.

All in all, the Asus Prime TRX40-Pro has the makings of a solid 3rd Gen Threadripper workhorse board at a price that doesn't break the bank. Let's now roll the benchmark numbers and see if it can trade blows with a dearer offering.