AMD's Ryzen 3rd Gen CPUs have been gaining decent traction since their arrival on July 7. The bigger question in terms of building a new PC, arguably, is which motherboard to pair them with, and though they will work just fine with older chipsets due to socket AM4 compatibility, the X570 is the way to go for the greatest number of features and end-to-end PCIe 4.0 coverage.

These X570 boards aren't cheap, and many commentators, including ourselves, have noticed a steep increase in price over the X470 and, more troubling, certain instability issues with the first-edition BIOSes. Though pricing remains unchanged, X570 boards are now stable enough for us to dig deeper into the various options available to the enthusiast.

If money is little object, Aorus wants you to consider the EATX-sized X570 Xtreme - a beast of a motherboard equipped with class-leading power delivery, impressive cooling, and, well, hitting the straps in just about every other department. 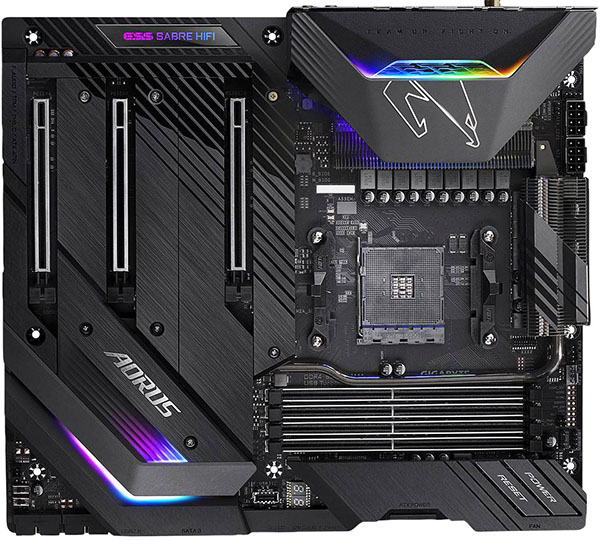 Let's get the obvious out of the way first. This £760 motherboard - yes, you read that right - is verging on pointless for anyone contemplating running their Ryzen chip at stock speeds. It is built, first and foremost, for overclocking. Let's explain why.

The Xtreme is the only X570 chipset-based motherboard to use a true 16-phase VRM for power delivery - 14 to the CPU and two for memory. In the past, ultra-premium boards would offer similar power phases by implementing doublers. Aorus is able to have proper independence on each phase because the board uses an Infineon XDPE132G5C digital PWM multiphase controller. It's rated to a staggering 1,000A, and one would expect it in the most power-hungry server boards, best-in-class workstation GPUs, and possibly in the next generation of overclockable AMD Threadripper mobos.

Aorus pairs the VRMs with TDA21472 (Infineon) power stages capable of handling 70A each. Oftentimes, a company's naming scheme is more hyperbole than fact, but for the Aorus X570 Xtreme, the power-delivery is just that... extreme. It's total overkill, of course, yet that's the entire point of this board. A problem, if you can call it so, with such a design is that it's not achieving peak efficiency when run with normal hardware, and you'd need to be pulling 300-500W just to tickle its capacity. The VRM design is analogous to having a 1,000W 80 PLUS Titanium PSU running a system chewing through 200W at load.

The cooling infrastructure is interesting insofar as a heatpipe runs from the right-hand VRMs, as we look at them, down to the chipset, which is passively cooled in this instance. The Aorus X570 Xtreme is one of the very few boards not to use a fan, and we suspect that the mass of cooling, ostensibly for the VRMs, actually helps the chipset more.

It's not just about VRMs, however, as Aorus has plenty of cooling around the trio of M.2 slots. The topmost slot has its own heatsink, while the lower duo uses a one-piece hunk of metal that screws on over the chipset's heatsink. That means you need to remove the entire piece to get access to either drive populated lower down the eight-layer PCB. The good news is that both heatsinks accommodate full-length drives, are hewn from metal, and have thermal material in between.

Cringingly, Aorus calls its overall cooling solution Thermal Reactive Armor, and the upper section of the board is screwed into a backplate for extra rigidity. RGB is limited to three zones - by the chipset, over the VRMs, and over the ESS DAC section. It's somewhat dull and muted compared to some of the competition, and can't be set to multiple different colours in each zone, so you'd probably have to use light strips to get a more immersive effect if lots of RGB is important. Given the price, should Aorus have gone with at least one OLED display somewhere on the board?

You may wonder how Aorus has achieved such a clean aesthetic on a board packed to the gills with features, including oversized power and reset buttons in one corner. The answer, cleverly, is by rotating the 24-pin and fan headers into one section, as shown above. The layout works really well by effectively hiding trailing wires, enabling a super-tidy build, and we appreciate that the main 24-pin is indented a little into the board to enable fitment into smaller chassis. We hope that other vendors follow suit.

Dual BIOSes (though neither are socketed), a debug LCD, temperature sensors, RGB LED strip headers, voltage-monitoring points and heaps of USB 3.1 Gen 2 are actually standard fare for an enthusiast motherboard, and all are present and correct on the X570 Xtreme.

Removing a bit of plastic on the bottom of the PCB reveals the auxillary 6-pin PCIe connector that's useful if you have three powerful graphics cards running full chat. Its location is a bit silly, however, because if you install a dual-slot card, which is likely, how are you supposed to connect the PSU power cable? We'd rather see it be moved to one side. And as we're at this section, though not much use for most, the X570 Xtreme really ought to have a Thunderbolt 3 connector as standard. This is, after all, the best motherboard in the X570 arsenal. One downside of having most of the bottom edge covered is the lack of fan headers in this area.

The integrated I/O section is home to cutting-edge connectivity. Aorus carries the established Intel Gigabit LAN and a 10Gbps Aquantia LAN that we'd expect on a motherboard costing this much. WiFi support is also excellent, with the board housing a WiFi 6 802.11ax card capable of theoretical 2.4Gbps. Being critical, the X570 Xtreme could have invested in an Intel 10Gbps NIC for one-company drivers and support. Other than that, there's nothing else we'd add here that would manifestly improve the board.

The BIOS performs a bit more quickly than we are used to on previous Aorus motherboards. All relevant options are accessible easily, fan control is excellent, and voltage support is fine-grained. All that said, if we were overclocking a Ryzen CPU, we'd probably use AMD's own Ryzen Master utility.

Make no mistake, this is a board whose technical excellence is undeniable. It's especially good in the VRM capacity area, but you'd need a beast of an overclocked CPU, preferably the upcoming Ryzen 9 3950X, to get anywhere near its specification limit.

One point of contention this side of the pond is that price, which at £760 is incredibly steep. We say this because the very same board is available in the States for $699, so it ought to be at least £100 cheaper here.