Nvidia's introduction of mobile GPUs based on the latest-generation Ampere architecture can mean only one thing; a flood of laptops refreshed and updated with the promise of vastly improved graphics performance. Three distinct GPUs form the initial batch of mobile Ampere - RTX 3060 Laptop (3,840 cores), RTX 3070 Laptop (5,120 cores) and RTX 3080 Laptop (6,144 cores) - yet there are many more configurations at play than first meets the eye.

Choosing not to brand its most energy-efficient parts as Max-Q this time around, Nvidia is instead giving OEMs a wide berth by producing multiple variants of each GPU, allowing the vendor to select a part that best meets its TDP and frequency requirements. Reports suggest over two dozen unique models are already available, and Nvidia's official specifications intimate that performance from the three new GPUs will deviate significantly.

Taking the entry-level RTX 3060 as an example, we're told that TDP can vary from 60W to 115W, which translates to a boost clock range of between 1,283MHz and 1,703MHz. Those numbers alone suggest that one RTX 3060 laptop could be over 30 per cent faster than another, and that begs the question, might an RTX 3070 laptop running at top speed outperform an RTX 3080 laptop that is reined in? It's certainly not outside the realms of possibility.

While Nvidia's decision to lump multiple GPU variants into three categories gives vendors greater scope to find a sweet spot, it does pose an obvious problem for consumers in that you may struggle to identify how fast your mobile GPU is prior to purchase. We're told that OEMs are being encouraged to list full specifications, yet there's no guarantee that will happen, and our first RTX 3000 Series review laptop, a Gigabyte Aero 15 OLED, arrives without those crucial pieces of data. 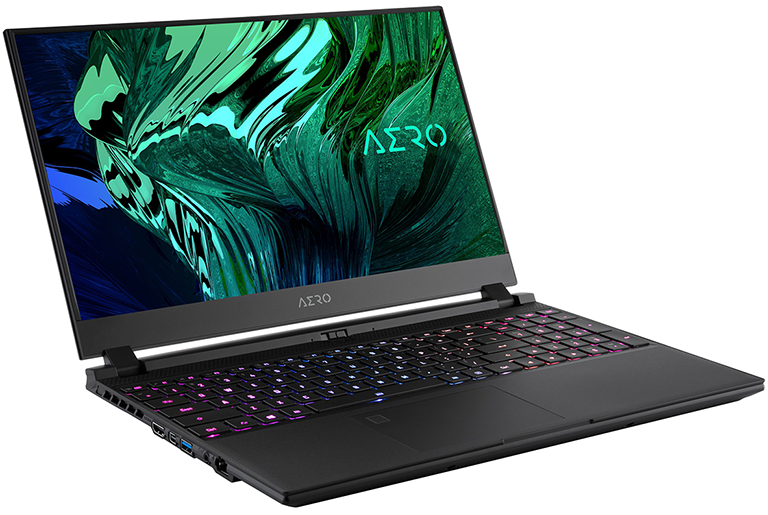 We're surprised Gigabyte didn't opt for a 16GB variant of Nvidia's flagship mobile GPU, yet the availability of 6,144 Ampere cores ought to guarantee a decent performance uplift, and as expected, the supporting cast isn't short on firepower. There's an eight-core, 16-thread 10th Gen Intel Core i9-10980HK processor, 64GB of dual-channel DDR4-2933 memory, and not one but two 1TB M.2 SSDs. Plenty of oomph, yet given that Intel's 45W 11th Gen Tiger Lake chips aren't yet available, we'd have liked to have seen an AMD Ryzen 5000 Series alternative in the interim.

Outside of the GPU upgrade, and a new pattern on the lid, it is for the most part the Aero 15 OLED as we know it. We'd encourage readers to revisit our earlier reviews for a complete overview of the overall design and build, but in a nutshell, the 15.6in chassis, measuring 3‎56mm x 250mm x 20mm and weighing in at 2kg, does a fine job of delivering high-end performance in a portable form factor well suited to both work and play.

Networking duties are now handled by Intel Wi-Fi 6 AX200 and Realtek Gigabit Ethernet, as opposed to a Killer combo on the previous gen, the internal battery has been bumped from 94Wh to 99Wh, and Aero 15 remains suitably well stocked in the I/O department.

The laptop's left side is home to HDMI 2.1, mini-DisplayPort 1.4, USB 3.2 Gen 1 Type-A, a combination audio jack and Gigabit Ethernet. Over on the right there's a further two USB 3.2 Gen 1 Type-A, Thunderbolt 3 Type-C, an SD card reader and a connector for the 230W external power brick, while the rest of the space is taken up primarily by vents for the internal cooling setup.

As before, the internal fans are clearly audible at all times, and quite loud when the going gets tough, yet that should be no surprise considering the high-end components within. It's a shame Gigabyte hasn't taken this opportunity to improve the webcam - it's still positioned between the keyboard and display where it provides an unflattering view of the user - but the familiar RGB keyboard continues to tick most of the right boxes, while the touchpad is both responsive and imbued with a fingerprint reader for an extra layer of security. 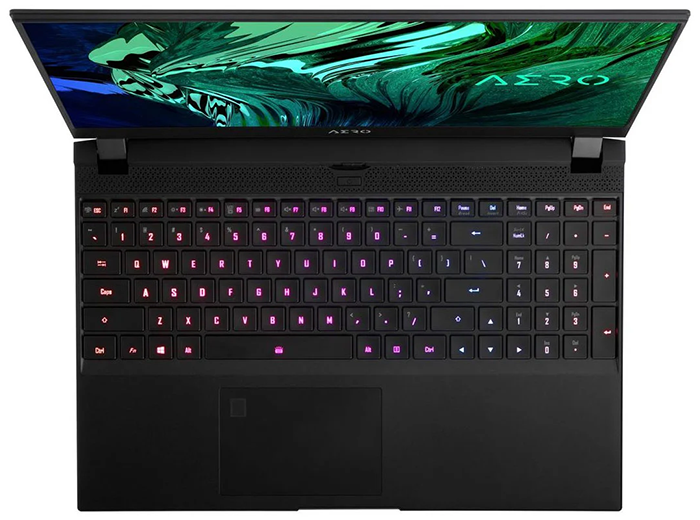 Gigabyte's Nahimic-powered speaker system also packs a surprising punch, but it is without a doubt the 15.6in OLED display that really catches your attention. Out-the-box colours are vibrant and accurate, true blacks pave the way for incredible contrast, and the 4K native resolution keeps everything looking extremely sharp. A highly capable panel, though do be aware it isn't a touchscreen if that's something you use on a regular basis.

Straddling the line between mobile creativity and gaming powerhouse, Gigabyte pre-loads a relatively clean install of Windows 10 Pro on one of the two available SSDs alongside Nvidia's creator-optimised Studio Driver. Question is, does RTX 3080 Laptop deliver a big enough wallop to justify that lofty £4,199 price tag? Let's run the benchmarks and see what's what.