Graphics card launches have moved into top gear as Nvidia and AMD flesh out the premium end of the market with a slew of boards based on Ampere and Navi technology, respectively. The green team's newest model is the GeForce RTX 3060 Ti, whose performance credentials are impressive for the starting £369 price point.

Partners are coming thick and fast to the Ampere party. The first retail card we have is the Gigabyte GeForce RTX 3060 Ti Eagle OC. 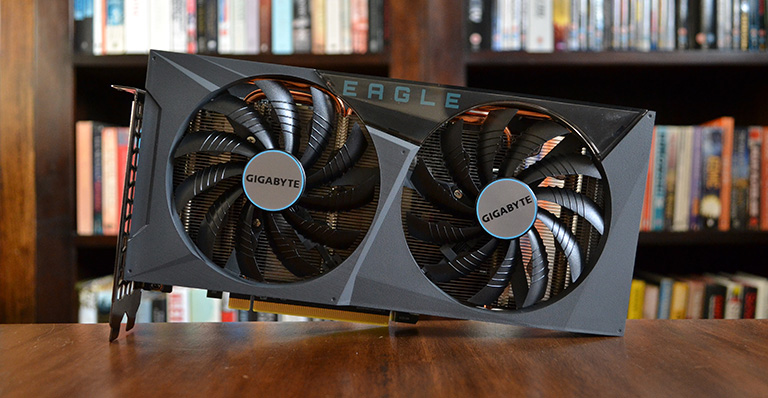 It's the first time we've seen the Eagle sub-brand, which sits alongside Aorus Master and Gigabyte Gaming in the 3060 Ti line-up. The OC variant is solely differentiated from the regular Eagle and Founders Edition by a 30MHz core overclock, taking it up to 1,695MHz.

Designed with keen pricing in mind, the Eagle OC is presented in a dual-slot form factor housing twin 100m fans. The large diameter pushes board height above the I/O bracket by 20mm, which is worth knowing if you plan to house in a small-form-factor chassis.

The fans spin in opposite directions to minimise turbulence. Both switch off below 60°C, but the transition between load and idle isn't perfectly smooth. The matte plastic shroud works well enough and provides Eagle with a distinctive, boxy look through the squared-off edges. Weighing 678g, or 352g less than metal-framed FE, there's little chance of card sag.

Underneath, four composite copper heatpipes fan out from a core-touching base. Given the exposed nature of the side, which you will see within a windowed chassis, it's a shame Gigabyte hasn't coated them in nickel for a cleaner look.

A solitary 8-pin connector provides adequate juice for the default 200W total board power. Like the FE board, actual in-game frequency is much higher than described, scaling to 1,920MHz under sustained load, so Nvidia has been very conservative with speeds. 8GB of GDDR6 memory, meanwhile, chugs along at a standard 14Gbps through a 256-bit bus. 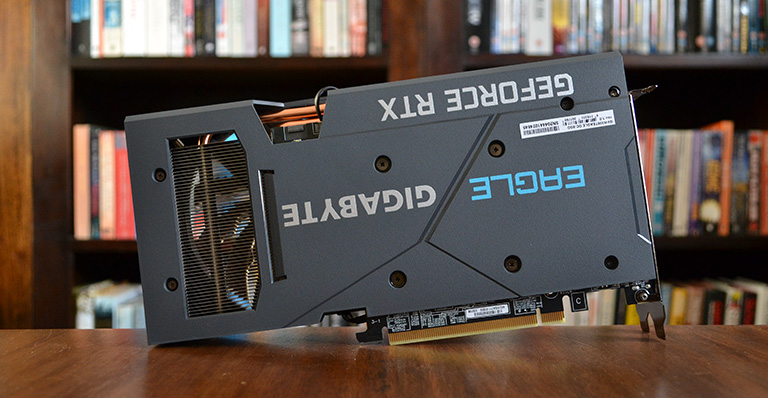 We're not fans of the large, multi-coloured lettering on the back; this card makes more sense with a cleaner aesthetic. Nitpicking somewhat, the fan cable is clearly visible from the side and looks ungainly, but it can be tucked in so it's less visible. There's no second BIOS, which is understandable on the value-conscious Eagle line.

Our sources indicate this card has a £399 SEP, or £30 above the Founders Edition. Pricing is mostly academic when supply continues to be in constraint. For most, if you can get one, hit the buy button without pause.

Remember the clear plastic section along the side? It's there primarily to show off the RGB strip in the middle. Gigabyte doesn't do it well because the main LED is visible on the left-hand side. In real life it's more of a hotspot, meaning the colour visibly weakens to the right. The Eagle would be better served with a diffused light bar. Adjusting the RGB is straightforward through Gigabyte's Fusion utility, though.

Like the reference model, SLI goes by the wayside. Gigabyte recommends a minimum 600W PSU.

Eagle mixes up outputs from the FE by using two DisplayPort 1.4a and two HDMI 2.1. All four can be used concurrently. It's a shame there's no provision for USB-C.

Gigabyte offers a marginally higher core speed, side RGB, and different outputs to the FE card. Worth potentially £30 more? Let's run the numbers.