Inno3D is the final add-in board partner to pass through the labs as far as the GeForce RTX 2070 Super is concerned. It makes most sense to look at the RTX 2070 because this Super variant enjoys the largest performance boost compared to its non-Super predecessor. Going by our results, one ought to see an extra 15 per cent framerate for not much more money.

As usual, Inno3D has multiple models based on the same GPU - seven, in fact - and jumping up the financial stack brings with it beefier coolers, faster speeds, and even all-in-one and discrete watercooling.

The company knows that pricing is sensitive on this GPU, especially since the launch of rival Radeon RX 5700 (XT) cards from AMD, so it has sensibly sent in a price-to-performance model in the form of the Super Twin X2 OC model.

The X2 measures 268mm long, 113mm high, and fits into a strict dual-slot form factor, roughly matching the dimensions of the Founders Edition model from Nvidia. There's good reason for that, of course, as this card also uses the reference PCB from the green team.

Twin 90mm axial fans sit on top of a card-wide aluminium stack that's bonded to a copper base - more on that later. Unlike the FE, the spinners remain off at temperatures below 48°C - so don't make any noise when idle - and then smoothly ramp up to speed as load increases.

The OC nomenclature in the model name is barely deserved. The X2 has a boost clock of 1,785MHz, compared to 1,770MHz on the FE, which is on the low side for a partner card. Under sustained load, the real-world speed of 1,830MHz is actually slower than the FE and any other partner card we have tested. A main part of this is due to the X2 being equipped with a standard 215W TDP, and there's no secondary BIOS with which to increase the default parameters. 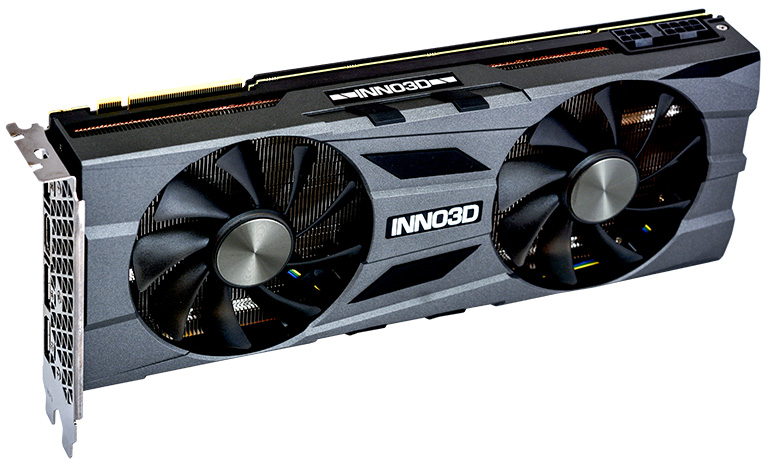 Being conscious of price, the card features a white sidelit logo, though the one between the two fans is not illuminated. We're not inclined to criticise the card for a lack of RGB or bling as other models higher up in the range do have improved lighting.

Power, meanwhile, is sourced through the regular combination of 6+8-pin connectors along the top edge, in exactly the same position as the FE card.

We'd normally say that a metal backplate is a nice touch. However, with no components on the back of the card to speak of, it's purely decorative with respect to cooling. Inno3D may argue that it provides greater rigidity, but weighing in at just over a kilo, the Twin X2 OC doesn't need it. Chalk this feature down to aesthetics.

And having that well-secured backplate means getting to the guts of the card requires a bit of personal time with the screwdriver. 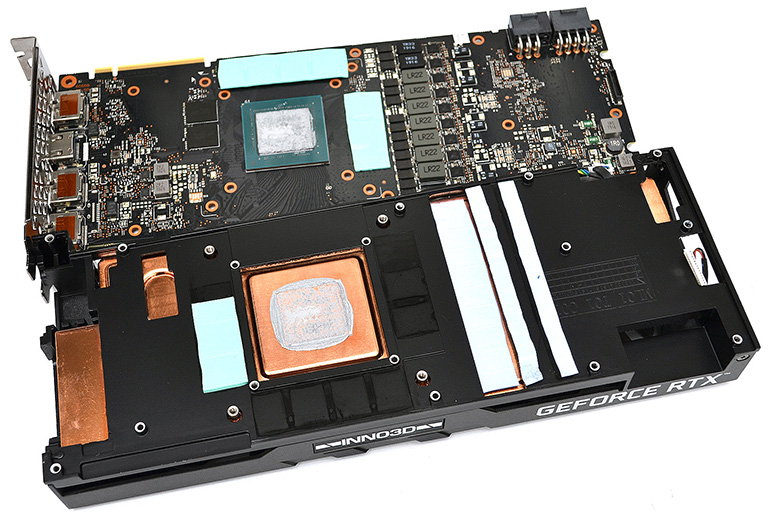 Et voila. The reference Founders Edition PCB cooled by custom heatsink, though the two are not exactly the same as Inno3D sources a few components from alternative suppliers. The 8+2-phase power design is more than powerful enough to handle RTX 2070 Super, as well.

Two sets of cables connect to the board - one for fans, the other for the sidelit logo - and you'll notice that X2's heatsink makes good, consistent contact with the GPU. The 8GB memory, clocked in at a stock 14Gbps, is covered with thermal tape, while the VRMs also have the same treatment. But given the wide copper surface spanning the PCB, the air produced by the fans doesn't provide ancillary cooling of the PCB-mounted components, unlike most of the competition.

This cooling combination also goes against the partner grain by not having the usual array of heatpipes jutting through the aluminium fins. Instead, the card uses the same vapour-chamber technology as found on you-know-what.

Another departure from the FE is the lack of USB Type-C on the I/O section, though the remaining outputs - triple DisplayPort and a single HDMI - are familiar. It's uncommon to see the cheaper partner models feature that forward-looking connectivity.

The review card retails for £510, making it one of the cheaper RTX 2070 Supers on the market, though the FE's £475 asking fee remains a large stumbling block for any partner looking to retail a base card with their own cooling twist.