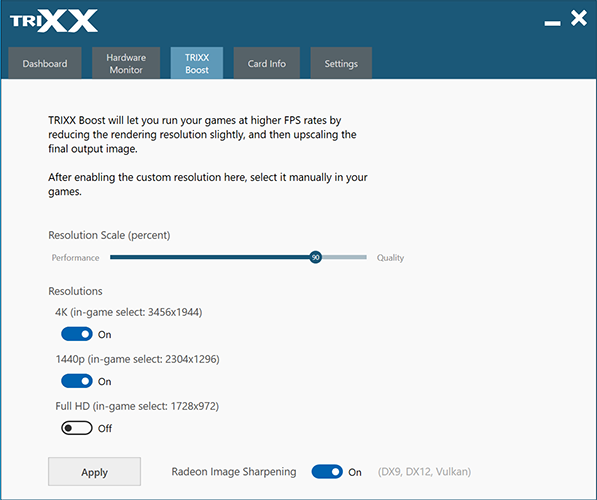 Sapphire needs to find another way to make its RX 5700 XT Pulse an interesting option for gamers, and TriXX Boost is it. The simple-looking utility, made available to reviewers as part of a 'developmental version' of a forthcoming TriXX release, allows the user to scale-down the rendering resolution to between 70 and 95 per cent. Simply use the slider to select your desired level of scaling, then flick the toggle switch for UHD, QHD and FHD.

With the scaling applied, the custom resolutions become available in-game, lessening the load on the graphics card, before the image is up-scaled and enhanced with Radeon Image Sharpening. The tool is straightforward to use, however there are some obvious caveats. It isn't yet possible to select custom levels of scaling for certain games - it's one setting for all - and, as mentioned earlier in the review, Radeon Image Sharpening doesn't currently support DX11, meaning a fair few titles will be upscaled without AMD's contrast-adaptive sharpening algorithm.

Here's Far Cry 5, a DX11 title, running at a native 3,840x2,160 resolution, and then scaled to both 90 per cent (3,456x1,944) and 80 per cent (3,072x1,728). It is remarkably difficult to tell the difference at first glance, and you really need to click the links and zoom into the full-size screenshots to notice the loss in quality. The image is a tad softer when upscaled, and there's a slight loss of detail in some of the crates, but we're having to strain to see it, and during gameplay we don't imagine even a trained eye would know when scaling is in place.

Tom Clancy's The Division 2 also scales well and benefits from RIS due to its DX12 rendering engine. There's no denying that the game looks best at the native resolution, but while jaggies start to become noticeable at 80 per cent, 90 per cent seems a reasonable compromise, and even a 10 per cent reduction in rendered resolution can have a meaningful impact on performance.

Given that AMD hardware is used to upscale content on all the popular gaming consoles, it is no surprise to find those expertise being put to good use on desktop Radeon cards. To be clear, we'd much prefer to game at the native resolution, and upscaling isn't a new trick, but TriXX Boost makes it accessible to the average user, and it's an effective way of putting often overlooked technologies such as RIS into play.

There's not much need for scaling at a QHD resolution in Far Cry: New Dawn - the GPU is powerful enough to deliver silky gameplay at 2,560x1,440 - but the benefits become clearer at UHD, where the 10 per cent reduction in resolution results in a 20 per cent increase in performance.

We see similar gains in The Division 2, though at a 4K resolution, you'll need to sacrifice more in terms of image quality in order to get closer to the desired 60 frames per second.

The potential performance boost is less pronounced in Civilization VI, and it's worth pointing out that upscaling and RIS is better suited to some titles than others. In our experience, racing games tend to take less kindly to RIS - the extra sharpening looks out of place in scenes that use lots of motion blur - but in first-person shooters, there's a better balance between performance increase and image quality. We'll be interested to hear your thoughts; is upscaling something you've tried, or do you view it as a compromise you're unwilling to make?