Like all Nvidia partners, Gigabyte rolls out multiple models on each new GPU. The GeForce GTX 1660 is no different in this regard with three cards to choose from. Hitting the base £200 price point is the two-fan GTX 1660 OC, which is a good choice for those opting for a small-form-factor system. As the name suggests, it's overclocked out of the box and thus offers extra value for free.

Stepping it up to the best, Gaming OC, offers a higher core boost clock, more expansive cooling via a three-fan heatsink, and a higher street price that sits at £225 or so.

The cooler is very much a known quantity for a mid-range Gigabyte graphics card. The larger size results in 280mm (l) x 117mm (w) x 40mm (h) vital stats that are, actually, only marginally smaller than the company's true high-end cards. Does the card need to be this big? Of course not, but if you have the space in a mid-tower chassis, size is not an issue.

As usual, the trio of fans switches off at temperatures below 60°C. The WindForce 3X cooling system requires the middle fan to spin in the opposite (clockwise) direction to the outer two, with the rationale that the air between the fans is always being pushed in the same direction - up for the left-hand duo and down for the right - thereby reducing turbulence and improving heat dissipation. 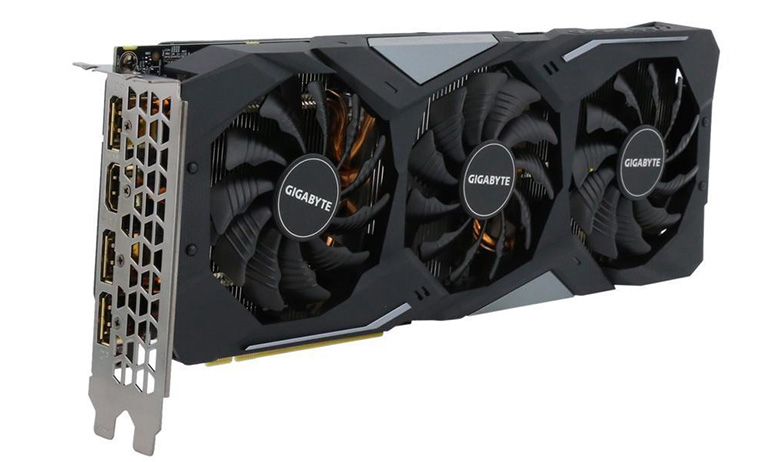 The plastic shroud isn't the most robust, however, and the black-and-grey colour scheme is designed to be inoffensive. RGB lighting is limited to the side of the card and placed behind the Gigabyte logo. The effect is muted - certainly not as eye-popping as a Founders Edition card - and it's not present on the base model that we have alluded to.

Popping off the heatsink highlights there's a 55mm overhang past the PCB that's required to house the full-length cooler. One positive benefit of such resolute cooling is the card's fans don't switch on until at least 30 seconds into a game: it takes that long for the temperature to creep past 60°C. Even then, the lack of noise is impressive, as you will see later on in the review. It's also good to see thermal tape between all GDDR5 memory chips, VRMs, and the large heatsink.

Gigabyte adds a plastic backplate as a heatsink-securing mechanism rather than for clear cooling purposes, and it slots into the topside shroud to provide a solid foundation. Not that you really need it, mind, as the card weighs just 653g.

This model increases the core speed from a default 1,785MHz to 1,860MHz in this instance, and actual in-game frequency stabilises at 1,940MHz, which is about as good as any GTX 1660 will do. Memory is left untouched, at 8Gbps, though it has the ability to scale a fair bit higher.

Keeping to the 120W TDP, power is sourced via the usual 8-pin connector at the edge of the PCB. No surprises in the output department, either, comprising three DisplayPort and a single HDMI.

The one bone of inevitable contention with GTX 1660 OCs can be their price. This one, available from £225, is a bit more expensive than we'd like, primarily because of the proximity of the next GPU up, GTX 1660 Ti.