We have chosen to focus the examination on the GeForce RTX 2080 Ti Founders Edition alone. The RTX 2080 is otherwise visually identical save for having an 8+6-pin power connector instead of the 8+8-pin you will see here.

The all-new Founders Edition really is a beautiful bit of kit with the two-tone finish working well. The central black section is plastic while the rest of the card uses thick aluminium that appears to be unibody on first glance.

Build quality is superb, so much so that it makes the older FE cards feel relatively cheap in comparison, and it's good to see Nvidia sticking to a strict two-slot form factor.

Inside, Nvidia uses a full-length vapor chamber and a couple of 13-blade axial fans that are powered by a three-phase motor, helping smooth vibration. The FE cards still refrain from stopping the fans at low loads - they run at 1,500rpm at idle by default - but as you will see later on, under-load noise isn't an issue. 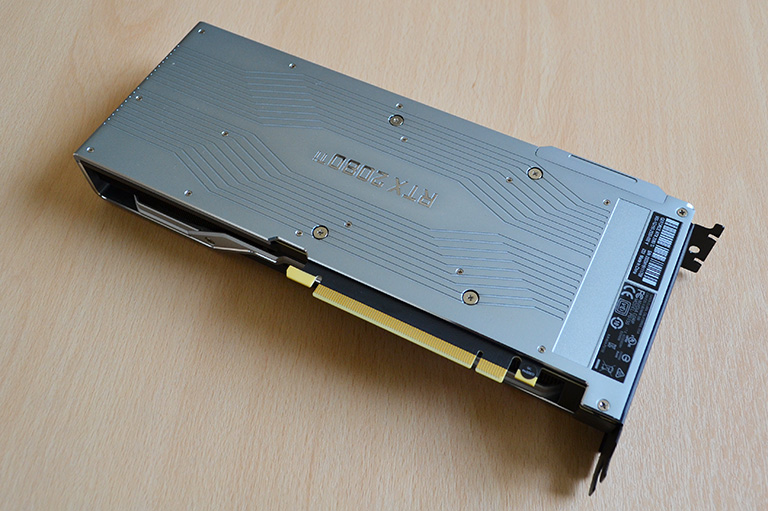 The back has the same quality full-length heatsink as the front. There are no RGBs or superfluous lights except for the regular GeForce (RTX) logo on the side. Being the Ti part, two second-generation NV Links are hidden underneath a plastic cover that matches the rest of the heatsink well.

The card measures a standard 10.5in long, which is considered short by modern standards, so it's a good fit, quite literally, for small-form-factor systems, too.

Nvidia further says that the sum of its engineering efforts makes this the quietest high-performance Founders Edition card ever; we'll put such assertions to the test later. 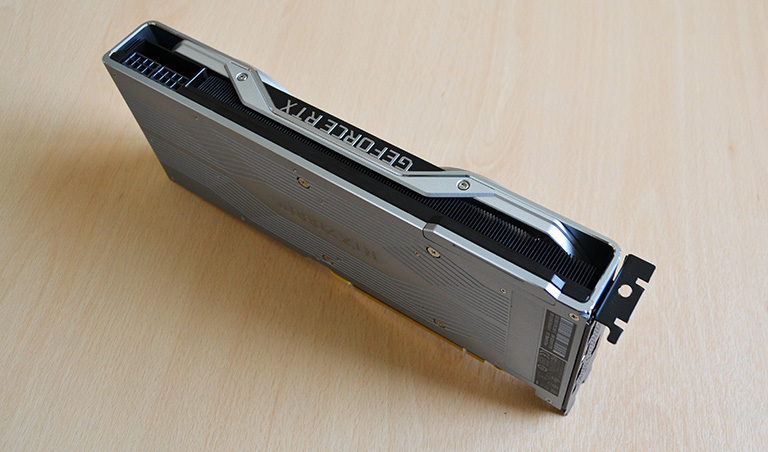 Unlike older FE cards, the RTX series isn't fully enclosed. Rather, some hot air is recirculated in the chassis though plenty is driven out of the back.

The GPU maintains peak efficiency be selecting the right phase for the workload. What this means is that certain phases have higher efficiency at lower wattages while others maximise theirs at the higher end of the spectrum. The RTX 2080 Ti is able to switch between phases, on the fly, in order to maintain across-the-range efficiency.

The RTX 2080 doesn't need as much juice so makes do with an 8-phase GPU and 2-phase memory supply for its same-speed GDDR6 memory. The intimation is that it may not be quite as efficient across the entire wattage spectrum.

Those who understand the architecture will recognise the USB Type-C connector on the bottom-right. It's home to a dual-use technology called VirtualLink, which is an open industry standard. Nvidia chooses it because it enables four-lane DisplayPort transfers as well as 27W of power, all from one cable. The idea is to make connection to VR headsets a one-cable affair.

Remember we said the RTX 2080 Ti and RTX 2080 are almost identical from an outward appearance? That much is true, but the underlying PCBs have to be different in order to account for the larger die, extra power phases and larger memory buffer for the champ card. Head on over to here to see the nude RTX 2080 Ti PCB and here for the RTX 2080.