There's little debate that AMD builds potent processors for both desktop and mobile computers. Harnessing leading-edge processes enables Ryzens to house more cores and threads than the Intel competition, whilst pulling in Radeon smarts offers a one-stop-shop for thin-and-light laptops.

AMD acutely understands that whilst most look at CPUs for thread performance first and foremost, having some form of baked-in graphics alongside Zen 3 cores makes sense - Intel continues plumbing IGPs into most decent chips. It is to this thinking that AMD introduces Zen 3-powered chips with Radeon graphics technology. Enter the Radeon 5000G Series.

The two emboldened chips have previously been released on April 13 in OEM form, meaning larger-scale system integrators enjoyed almost four months of exclusivity. Makes sense, too, as AMD has been increasingly keen in fostering better relations with big SIs who sell systems by the tens of thousands.

Now coming to the DIY market - that's you and me - the vital specs make for some interesting reading and exposition. Looking at the Ryzen 7 5700G first, you'd be wrong in thinking AMD has taken present Vermeer-based Ryzen 7 5800X and tacked on the graphics portion. Such a move is eminently feasible but would require copious amount of engineering.

More conveniently, AMD minimises the work involved by choosing to base these two APUs on mobile Cezanne technology. Those chips already carry Zen 3 and Radeon goodness, albeit in a different form factor, so switching out to a desktop AM4 socket is no big deal. A third chip, Ryzen 3 5300G, remains an OEM-only proposition.

Performance and feature ramifications for doing so require peeling back the onion. You see, the Cezanne desktop proposition doesn't reflect Zen in all its glory. Compared to the IGP-less Vermeer chip bearing the same core-and-thread count - Ryzen 7 5800X - the 5700G has access to only half the L3 cache, which is exactly how the high-performance Cezanne mobile chips are built. Further similarity comes from using the resultant space saving to shoehorn 512 Radeon RX Vega cores, running at 2GHz, across eight CUs. Note that this is actually fewer CUs than the previous IGP champ, Ryzen 5 3400G, which we'll compare to in the performance section.

Shaving off half the cache doesn't nearly compensate for the ballooning transistor budget forced by having to include integrated graphics. Ryzen 7 5700G, for example, is home to 10.7bn transistors, whereas the CPU-only Ryzen 7 5800X is closer to 6.5bn.

If it's not abundantly clear, AMD repurposes Ryzen 7/9 H-series mobile Cezanne chips from their native FP6 socket to AM4. Understanding that the desktop area may require extra lanes for expansion, AMD ups the total count to 24 (from 16 on mobile), though do be aware they are PCIe 3.0, instead of PCIe 4.0 on Vermeer. 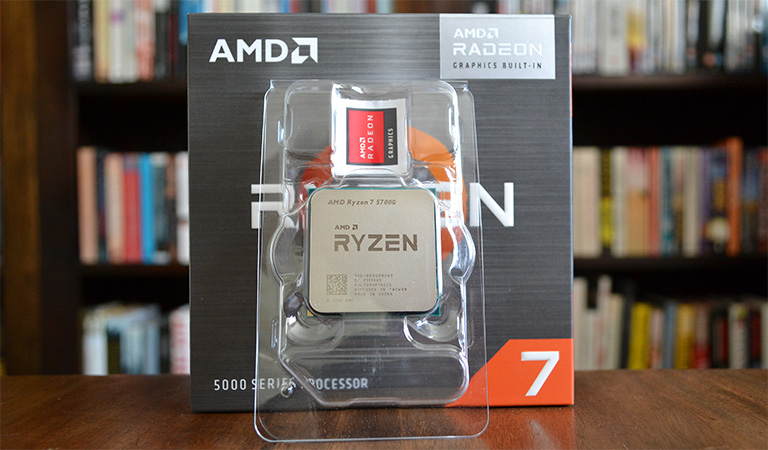 Appreciating the 65W ascribed TDP for the Ryzen 7 5700G and due note of its frequencies leads us to believe it will perform close to the Ryzen 7 5800X in lightly-threaded tasks, be up to 20 per cent slower in all-core tests where power budget is key in elevating clocks, and also be marginally slower in gaming due to carrying half the framerate-enhancing L3 cache.

Even so, for readers who want Zen 3 goodness without needing to invest in a discrete graphics card, or are planning on running a small-form-factor rig, there's certainly kerb appeal here.

Unlike many high-performance Ryzens, AMD bundles Ryzen 7 5700G with the Wraith Stealth cooler in the box, which makes a lot of sense given its relatively low TDP. Available on-shelf on August 5, let's now head on over to the benchmarks.