The desktop CPU market is warming up nicely as AMD and Intel bring forth new processors in the next six months. Vermeer and Rocket Lake will offer enhanced performance through improvements in architecture, but for now, the mainstream arena is home to Ryzen 3000-series and Intel 10th Gen.

One can make a case for both sets of processors depending upon workload, with AMD typically providing better value at the same core-and-thread count. Intel, meanwhile, generally offers higher gaming framerates at lower resolutions when paired with a beefy graphics card.

At the top end of the current Intel 10th Gen stack is the Core i9-10900K. The chip is capable of boosting a couple of cores to 5.3GHz under a technology called Thermal Velocity Boost. Various other 10900-series parts exist; one without integrated graphics, a couple of 65W offerings, and a 35W model primed for small form factor builds.

It's to this 10C20T family that Intel has recently introduced the Core i9-10850K. $35 cheaper than the head honcho, its specifications are almost identical, making it an attractive purchase for the enthusiast keen to go down the Intel route. Let's take a closer look.

Core i9-10850K is indeed very similar, and it's actually simpler to delineate the differences between it and the Core i9-10900K than underscore similarities. The 10850K offers 100MHz less frequency on base, boost, and TVB speeds, which come in at 3.6GHz, 5.1GHz and 5.2GHz, respectively. TVB kicks in if the cooling solution is robust enough to keep load temperature below 70°C. That's the theory, yet most motherboard manufacturers have taken it upon themselves to run with TVB active all the time.

Armed with such knowledge, the Core i9-10850K ought to be a tad slower in light-load situations, offer practically the same performance when fully loaded, and appreciating it's pulled from the same wafer line, provide a similar overclocking experience.

Is it worth saving $35 for a fraction less on-paper performance? That depends on how badly you want Intel's current mainstream champ. The truth is the price difference between 10900K and 10850K is much larger than $35/£35. At the time of writing, Scan Computers has a £110 gap between the pair. The same is true over the pond at retailers such as Newegg. Core i9-10850K certainly isn't cheap at £440, but it tracks rival AMD's 12C24T Ryzen 9 3900XT real-world asking fee far more closely.

One can now see why the Core i9-10850K exists; to offer the would-be Ryzen purchaser a viable option on the same CPU pricing footing. Like AMD, you'll have to provide cooling as there is no heatsink in the box. It ought to be capable, too, as while the chip has a nominal 125W TDP, running it at high all-core speeds, as motherboards tend to do when set to auto, causes the processor to pull 175W on its own. 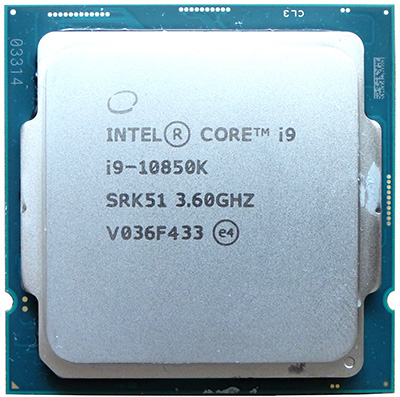 A chip off the old Comet Lake block

Last but not least, anyone contemplating such a chip needs the latest Z490 chipset-based motherboard due to Intel changing form factor from LGA 1151 to LGA 1200.

Enough jibber-jabber, you are only here for the benchmarks...