Intel used to rule the roost as far as high-end desktop CPUs were concerned. The Core i9 series scaled to an impressive 18 cores and 36 threads when the 7980XE came marching into town in September 2017. Though costing a not-so-cool two grand, Intel's finest HEDT had just enough firepower to see off the nascent AMD Ryzen Threadripper threat. It left us with a suitably positive performance impression, so much so that we opined 'make no mistake, the Intel Core i9-7980XE is the fastest consumer processor ever launched. A dose of overclocking makes it untouchable for heavily-threaded applications.'

What was true of 2017 is not true of 2019, however. Intel has subsequently launched the slightly faster Core i9-9980XE and today brings the Core i9-10980XE to bear. Both still use a 14nm process, employ the same 18C36T muscle, and use a combination of minor IPC tweaks and frequency uplifts to extract more performance from an ageing core microarchitecture. AMD, meanwhile, has since debuted 32C64T Ryzen Threadrippers for the HEDT space, with the latest 3970X, built on the Zen 2 blueprint, also launching today, offers supreme performance in heavily-threaded applications.

The Core i9-10980XE is notable for at least a couple of reasons. Intel used to charge $2,000 for its top-line HEDT part sitting on the proven X299 (LGA 2066) platform. That isn't the case anymore, as this range-topper is armed with a $979 price tag. Secondly, it uses an optimised derivative of the Skylake core known as Cascade Lake, which is the same base architecture powering the latest Xeon processors.

Just to be clear, Intel continues to mix-and-match architectures and public branding. We know this high-performance 10th Gen chip is based on the 14nm Cascade Lake-X architecture. In the mobile space, meanwhile, 10th Gen typically refers to the implementation of a 10nm Sunny Cove (codenamed Ice Lake) architecture.

A tad confused? Let's head over to the regular table to see how this Core i9-10980XE fits into the wider Intel HEDT landscape.

Intel has 15 desktop CPUs that command Core i9 branding, split fairly evenly between 7th, 9th and 10th Gen chips. They generally share the same core-and-thread philosophy as the stack scales. Makes sense, too, as the mainstream Z390 platform tops out at eight cores.

Compared to previous generations, Intel removes the 16C32T part. Iterative efficiency improvements on the 14nm process enable Intel to specify higher peak boost speeds across the range. The Core i9-10980XE, for example, runs at up to 4.8GHz on select cores with Turbo Boost Max 3.0 enabled, compared to 4.5GHz on the Core i9-9980XE. Both share a 3.8GHz all-core speed.

Other generational improvements include an extra four PCIe 3.0 lanes for the 10-series CPUs, made available from the high-core-count (HCC) die. And though all these chips will work on existing X299 boards using the LGA 2066 socket, full-lane compatibility requires the use of what manufacturers are calling 'X299 refresh' boards - look out for models supporting 48 lanes.

Intel knows that incremental architecture enhancements over a two-year period won't cut the mustard. This is why it also includes additional features such as support for Wi-Fi 6 AX200 and 2.5G Ethernet, Thunderbolt 3, 256GB of RAM (up from 128GB) and Optane. Do be aware the first two require external controllers on the motherboard to function.

Official DDR4 speeds see a boost, from quad-channel 2,666MHz to 2,933MHz, though most creators and enthusiasts ran with faster memory on older Core X-series chips anyway. The power budget remains at 165W, and with no cooler in the box, we'd recommend investing in a high-quality air or all-in-one liquid-cooling unit for maximum performance. 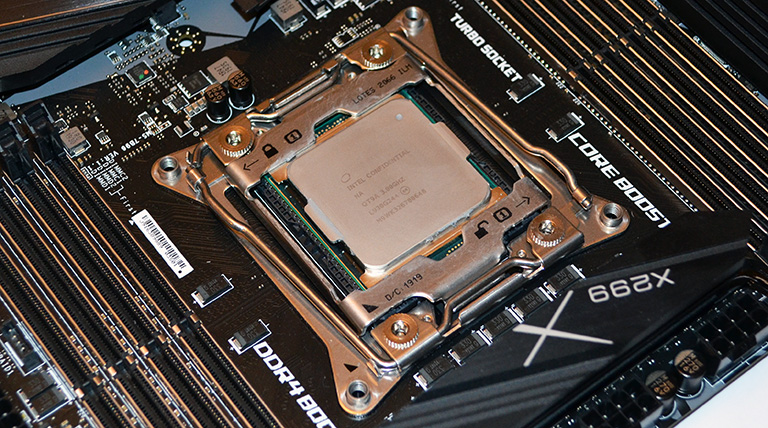 The sum of these iterative improvements, according to Intel, is performance that's five-to-10 per cent better than the Core i9-9980XE. Makes sense as their all-core speed is identical. If that was all the goodies from one generation to the next, we'd be rightfully disappointed. Intel is acutely aware of the threat posed by top-end Ryzen 9 processors that scale to 16C32T and the new Ryzen Threadripper chips. This is why, a short while ago, it took the opportunity of pre-announcing these five 10-series HEDT chips. The kicker was the price.

Reading between the lines, it is Intel's way of saying that its HEDT performance progression has stalled whilst AMD's is in the ascendant. The only meaningful way it can compete for the mindshare of entry-level workstation users and high-end creators is to be savage on price, which is nothing but good for the consumer.

As Intel's consumer HEDT line-up continues to be limited to 18C36T in 2019, some interesting dynamics emerge in this space. The mainstream AMD Ryzen 9 3950X, costing $749, now has 16C32T running at an all-core speed of around 4.0GHz, meaning a mainstream platform, imbued with the latest PCIe 4.0 connectivity, may well be on a performance par with a genuine HEDT one. On the other front, with 32C64T Threadrippers available today based on the latest Zen 2 architecture, and 64C128T promised for early next year, rival AMD is extending the HEDT space much farther than Intel can manage.