Most of the press attention for AMD's raft of 2019 CPUs and GPUs has been caught up with Ryzen 3000-series processors and Radeon RX 5700 (XT) graphics. Rightfully so, too, as they provide solid performance and amenable price points.

Most Ryzen CPUs, irrespective of generation, require an add-in graphics card for outputting video; there's no baked-in graphics for the performance line, unlike Intel's mainstream chips. That's not to say AMD shuns the desktop Ryzen CPU+IGP arena completely - why would it when it can rely on integrated Radeon graphics? - and this is where the G-suffixed parts come into play.

To that end, HEXUS took a look at the Ryzen 5 2400G and Ryzen 3 2200G, codenamed Raven Ridge, about 18 months' ago, and our investigation found 'we like these Ryzen chips as the backbone of budget PCs that have reasonable CPU grunt and enough in the GPU department for entry-level, light gaming.'

In concert with the release of a plethora of other Ryzen chips, AMD has, somewhat quietly, also recently shipped upgrades to its APU line-up. Enter the Ryzen 5 3400G and Ryzen 3 3200G, codenamed Picasso. Let's roll out the specification table and provide some insight.

Regular, IGP-less Ryzens, representing the bulk of the portfolio, use 1000-series branding for those built on the original Zen (14nm) architecture, employ 2000-series for refreshed Zen+ (12nm), and run with the latest Zen 2 (7nm, mostly) for 3000-series released this July.

AMD's model-numbering system is out of whack for the graphics-infused chips. There were no 1000-series G-class chips; AMD went straight over to the aforementioned 2400G and 2200G but used the base Zen architecture instead of Zen+. The company's argument for inflating the model series rested with having all-new Vega graphics on the same piece of silicon.

Ryzen 5 3400G carries over the same tradition. Rather than employ the latest-and-greatest architecture Zen 2 architecture, the CPU portion uses Zen+, so in line with a Ryzen 5 2600, for example. Such a move ought to provide a few extra per cent IPC-driven performance on a clock-for-clock basis, but as Zen+ generally ramps up a bit higher than Zen - 3.7/4.2GHz base/boost versus 3.6/3.9GHz on 2400G - we're expected up to 10 per cent more overall CPU oomph in many applications.

As on 2400G, AMD uses a single, fully-populated CCX that offers four cores, eight threads and 4MB of L3 cache. It also keeps the dual-channel DDR4-2933 memory controller of its direct predecessor, which all makes sense. The graphics portion is also familiar, as 3400G houses the same Radeon RX Vega 11 GPU, albeit clocked in at up to 1,400MHz instead of a peak 1,250MHz.

Understanding that while most will purchase the Ryzen 5 3400G and run it in inexpensive motherboards with the IGP as the video source, AMD does improve add-in card performance potential by widening the PCIe 3.0 graphics from x8 to an industry-standard x16.

Ryzen 5 3400G is a bit better than the Ryzen 5 2400G in every performance area - a bit more CPU grunt, higher GPU speeds, wider PCIe support - while keeping to a 65W TDP. That's not a bad deal when pricing is $149 (£140). It continues to be bundled in with the Wraith Spire cooler and is still part of the three-month Game Pass bundle from AMD. 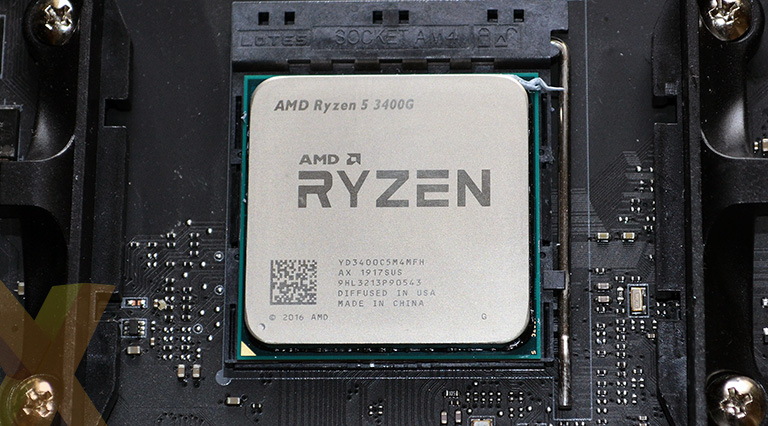 Peering over to the desktop competition from Intel, the Ryzen 5 3400G used to be cheaper than any Core i5 processor, which started at $182 for the 9400F. However, very recent price cuts bring that particular processor into view, down from $189 to $157, to better compete with the new Ryzens. Don't get too excited, though, as the Core F-series lacks integrated graphics so isn't an apples-to-apples comparison against Ryzen 5 3400G. The regular, IGP-toting Core i5-9400 remains more expensive at $189 or so.

This Ryzen's actual competition comes from the Core i3-9300, a 4C4T part with old UHD Graphics 630 at the visual helm. Looking further back, Core i3-8300 is also a reasonable comparison candidate, as are a raft of other Core i3s.

Looking for a relatively budget processor purporting to offer decent CPU performance and a best-in-class desktop IGP? AMD reckons the Ryzen 5 3400G is it. Let's now find out if such a statement rings true.