Back on the 7th July, AMD ushered in six Ryzen 3000-series CPUs touting the latest Zen 2 architecture and 7nm production.

We've since taken a look at the Ryzen 9 3900X, Ryzen 7 3700X and Ryzen 5 3600X, and all offer decent performance at their respective price points. That leaves three processors untested, with the range-topping Ryzen 9 3950X yet to come, so today we're casting our reviewing eye over the Ryzen 7 3800X.

Said CPU follows an established path laid down by the logical model numbering. Being a Ryzen 7 means it houses eight cores and 16 threads. Its 3rd Gen status elevates the L3 cache to 32MB, double that of the previous generation, though TDP remains at 105W.

The astute purchaser would most likely look at the 3700X and overclock it a smidgen to match what's on offer here. That makes sense, of course, but if a system integrator receives favourable pricing from AMD, the 3800X will still perform a touch better. And perhaps one can argue that its existence is valid because this is AMD's finest octo-core weapon against the still-dearer Intel Core i9-9900K.

On a technical level, AMD has PCIe 4.0 support across the entire range, specifies the memory controller to run at DDR4-3200, and reckons the processor is best mated to an X570 chipset-based motherboard. 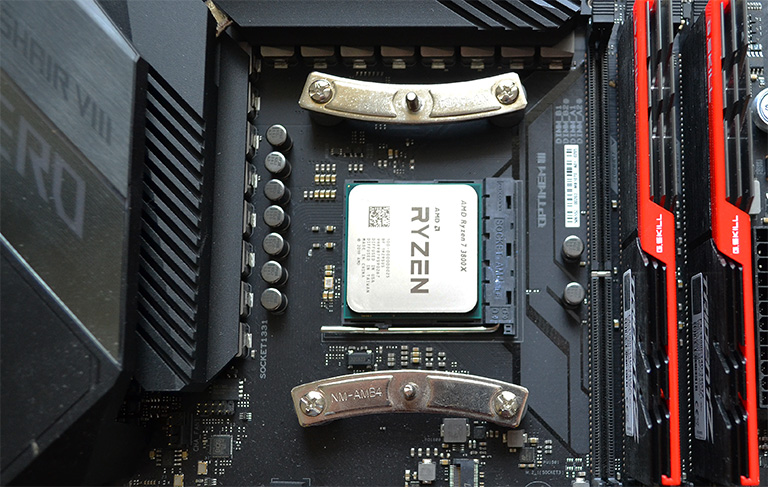 Digging a layer deeper, AMD builds the Ryzen 7 3800X using a single CCD complex - it can hold the requisite eight cores in two CCX groups of four cores - but it could actually use two CCDs - four cores in each - such that there's a higher write-bandwidth link between the cores and discrete IOD chip, as well as double the L3 cache. This is important to know because, as it is, the single-CCD arrangement means the processor writes from external DRAM at half controller speed, translating to 16 bytes per cycle. The Ryzen 5 chips, meanwhile, also suffer from this arrangement. AMD doesn't want to go down the dual-CCD route because it would then likely endow this chip with 64MB of L3, making segmentation harder.

Our AMD-provided sample, cooled by a capable Noctua NH-D15S heatsink run with the single supplied fan, averaged 4.174GHz across all cores under prolonged load - a figure that's on the lower side of the quoted base and single-core boost speeds. Peak temperature was reported as 72.25C, so no thermal issues to speak of.

AMD ships all Ryzen 3000-series desktop processors with coolers in the box. Ryzen 7 3800X receives the same Wraith Prism with RGB LED as the 3700X. Sweetening the deal for the gamer, AMD's recent promotion applies to this model, as well, where you receive a three-month subscription to Xbox Game Pass. Further details on qualifying products are available at amd.com.

Touting extra frequency by way of a higher TDP, let's roll the benchmark numbers on the Ryzen 7 3800X and then pass judgement.