We're spoilt for choice when it comes to all-in-one liquid CPU coolers. Although many are sourced from a select handful of ODMs, the end products come in a wide variety of shapes and sizes designed to best suit your build, and if you're intent on putting together a rig that looks the part, we'd argue an AIO tends to be easier on the eye than a giant air cooler.

For most folk, the sensible route would be to pick from any of the established brands - the likes of Corsair, Fractal and NZXT have you covered - but there's always a case to be made for trying something a little more exotic. Alphacool's Eisbaer Pro Aurora 360, priced at £168, certainly fits into that category.

On the face of things, a £168 price tag isn't outrageous in today's market, particularly when you consider the scope of the product. Whereas most AIOs tend to adopt a closed-loop format aimed specifically at mainstream sockets, the Eisbaer Pro Aurora incorporates a giant contact plate guaranteed to encompass even the largest of sockets. The regular Eisbaer, launched a while back, already covers common sockets, whereas this Pro edition can tackle the likes of Intel LGA 3647 and AMD sTRX4 and sWRX8.

Handy to know there's plenty of potential to upgrade, and to that end there's an opportunity to expand the loop to incorporate, say, an Eiswolf GPU cooler. Alphacool makes use of standard G1/4in connections, a quick-release fastener makes it easy to add to the TPV hoses, and there's also a fill port atop the pump head to keep things topped up. Furthermore, while most AIOs feature an aluminium radiator, Alphacool's 390mm x 120mm x 25mm unit favours a copper construction for optimal performance. Indeed, the black paintwork applied to the fins is so thin that you can see the shimmer of underlying copper.

High-end performance is very much the name of the game. Inside the 3mm-thick nickel-plated copper base are 58 cooling fins spaced at 0.4mm to cover an area of 55mm x 42mm, while liquid is moved via a 2,600RPM DC-LT pump promising a maximum flow rate of 75L/h.

Alphacool deems this "the optimal solution for the most powerful processors on the market," yet don't assume the oversized 64mm x 79mm x 54mm block applies only to HEDT. On the contrary, mounting equipment is included for AMD AM4 (but not Intel LGA 1200) and we're intrigued to see whether or not the large contact plate will prove beneficial on our many-core Ryzen 9 5950X. 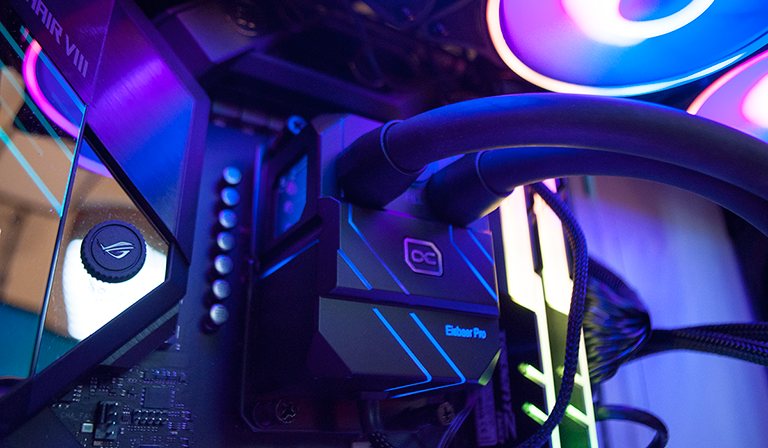 Installation is for most part in keeping with most other all-in-one solutions, though there are a few more components involved on AM4, where the pump head is secured using a combination of screws, two types of washers, spacers and nuts. Everything needed to get up and running is included in the bundle, and Alphacool has paid attention to the extras; you'll find a good-sized tube of thermal paste, as well as a three-way splitter for the fans and a digital RGB controller in case you lack the relevant 5V motherboard header.

Speaking of fans, the trio of bundled Aurora Rise 120mm PWM blowers touts 3.17mm/H2O static pressure and 119.8m3/h maximum airflow. They look the part, too, with eye-catching RGB, whereas the few small slithers of lighting on the pump head seem a relative afterthought. The caveat to the fans is that they are noisier than anticipated inside our test platform, and though the RGB can be daisy-chained between all four components - pump, fan, fan, fan - there's still a fair bit of cable clutter to contend with. 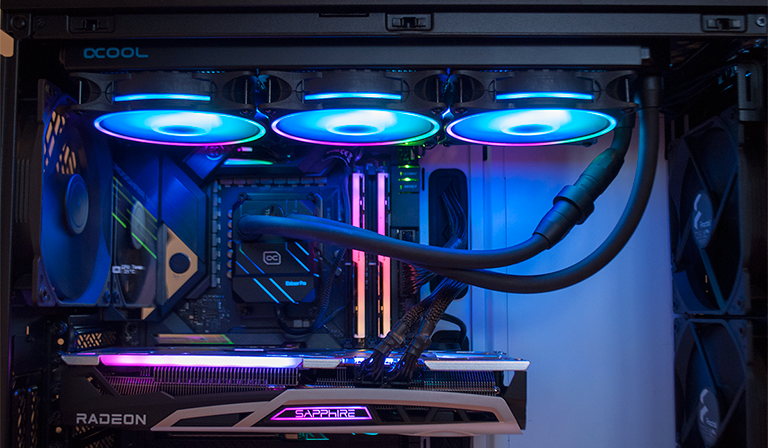 Take a little extra care with the cabling and the end result can look rather dashing. Alphacool's larger-than-usual CPU block certainly doesn't appear out of place on our AM4 test bed, though nitpicking somewhat, the quick-release fastener, if you don't intend on using it, does spoil the look of the otherwise sleek tubing.

One other potential stumbling block is the standard two-year warranty, which is the shortest we've seen on all-in-one cooler for some time. On the other hand, the combination of standard fittings and Alphacool's vast catalogue should make the Eisbaer Pro Aurora serviceable for quite some time. Now how about some benchmarks?