Slovenian firm EK Water Blocks is well known in enthusiast circles as a go-to provider for high-end liquid cooling components. The brand's portfolio of premium custom-loop components remains highly regarded, and given the huge rise in popularity of hassle-free all-in-one solutions, it is no surprise to find that the EK product line now includes a full range of AIO coolers.

At the top of the pile is the EK-AIO Elite 360 D-RGB, a £180 solution that is now available for pre-order ahead of initial shipments in early December.

Appreciating the typically enthusiast audience, EK is keen to point out that an AIO solution differs from its core product range in that it cannot be modified or extended. In contrast, and for those who are less inclined to get their hands dirty (or wet, as may be the case), the Elite 360 D-RGB is a pre-filled, closed-loop solution intended to be easier to install and maintenance-free.

None of that should be surprising - AIOs are hardly a new proposition - but what sets the EK range-topper apart from most competitors is that it ships with half-a-dozen fans as part of the bundle, allowing for a push/pull configuration right out of the box.

The six included 120mm fans are from the EK-Vardar S stable, ensuring high-static PWM credentials ideally suited for radiator use. Fan speed ranges from 550 to 2,200RPM, with maximum airflow rated at 112.20m³/h while producing 36.4dBA of noise, and of course addressable RGB lighting is featured as standard.

Sandwiched between the fan array, EK's 395mm x 120mm x 27mm aluminium radiator is connected to an 88mm x 70mm x 64mm CPU block via 400mm of rubber tubing wrapped in a nylon braided sleeve and attached to the block using rotary fittings for flexibility. Build quality feels very good throughout, and though the pump assembly is somewhat chunky by today's standards, the understated industrial look blends well with our test platform.

Pump speed ranges from 1,000 to 3,300RPM via a 4-Pin PWM header, and we like the simple, sleek finish of the mirrored lid and backlit, addressable EK logo. There's a classy look and feel about it, though pump noise at higher speeds can be an issue - more on that later.

EK's presentation is tidy and the bundled equipment is excellent. Fittings for every recent Intel or AMD socket bar Threadripper are included, there's a small spare tube of thermal paste (in addition to the neat layer pre-applied to the CPU block), and even the user manual is well illustrated with comprehensive instructions. All the various fixtures are also helpfully separated into Intel or AMD bags, and to top it all off, the cooler is backed by a five-year warranty for that extra piece of mind. 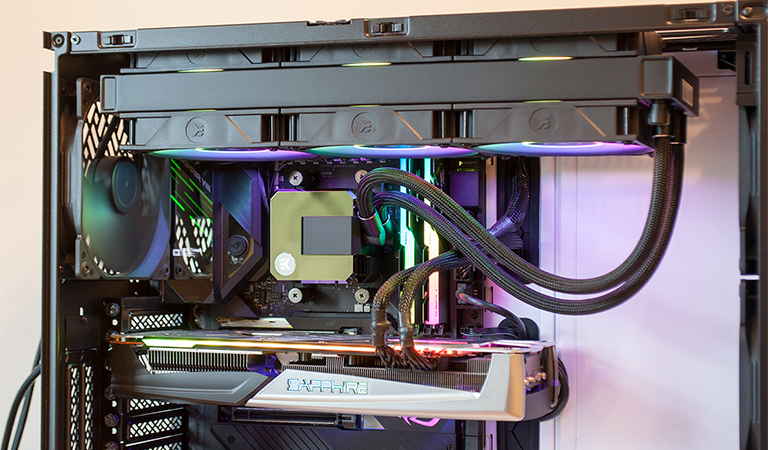 All the essentials are covered but the nature of a six-fan cooler is such that installation is a tad more involved. Fixing the CPU block on our AM4 test platform proved straightforward enough - simply remove the default AMD brackets, fit EK's supplied standoffs and clamp the block into place with the provided thumbscrews - but there are then a fair few cables to contend with.

To help facilitate so many wires, EK includes a seven-way hub as part of the bundle. The compact, SATA-powered block can be connected to just two motherboard headers - RGB and PWM - and synchronises all seven lighting zones (one on the pump, plus six fans) while managing fan speeds from a single PWM header. 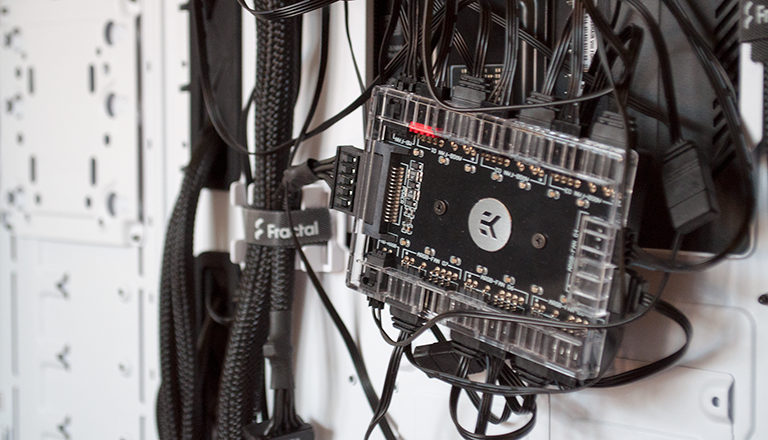 Cabling can still get a bit messy, but installation on the whole is no real hardship, and certainly far more streamlined and easy to manage than a custom loop. One obvious point of consideration is that the six-fan radiator assembly requires a good amount of chassis space, and if top mounting, offset rails would be preferred to ensure ample clearance past motherboard heatsinks.

There's plenty of room in our Ryzen 9 3950X test platform, so let's fire her up and see what our test results have to say.