To say that Corsair has led the charge for all-in-one liquid coolers would be something of an understatement. Working with key ODMs to bring the tech to a wider audience, the firm's Hydro Series coolers opened the floodgates over a decade ago, and proved instrumental to the development of myriad AIOs on the market today.

But staying ahead in a congested marketplace isn't easy, and Corsair's frequent upgrades and ambiguous product names have resulted in a catalogue that is confusing at the best of times. Who can tell the difference between GTX, Pro RGB and RGB Platinum models?

The latest range, dubbed the iCue RGB Pro XT, doesn't make things a whole lot clearer. Officially announced at the turn of the year, the new line-up has been slow to roll out for obvious reasons but is now beginning to appear at retail in meaningful numbers. In keeping with previous generations, a choice of three form factors is available; the 240mm H100i RGB Pro XT (£115); the 280mm H115i RGB Pro XT (£133); and a range-topping 360mm iCue H150i RGB Pro XT (£153).

We have the 280mm unit in for review, but first things first, where exactly does the iCue RGB Pro XT fit into Corsair's crowded portfolio? As we understand it, the new Pro XT line employs a CoolIT pump and effectively replaces existing Pro coolers that were built in partnership with Asetek. Corsair appears to be transitioning its top-end solutions over to CoolIT, as the Pro XT products will live alongside the flagship Platinum range, which already offers a CoolIT pump as well as RGB fans. This means that Corsair's best-performing pump is now available at lower price points, while the iCue H150i RGB Pro XT is the first Corsair cooler to marry the CoolIT design with a 360mm radiator. 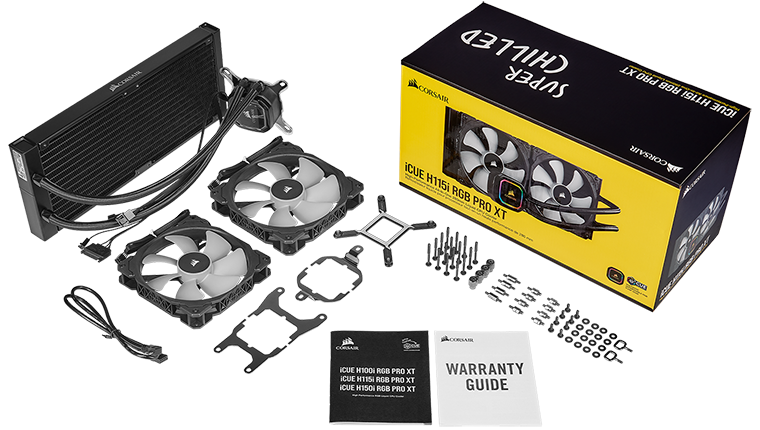 Getting back to our 280mm review sample, presentation hasn't changed a whole lot, and given the £133 price tag, we reckon Corsair could afford to pay closer attention the finer details. All the screws and bolts are lumped together into a single bag, as opposed to being separated for Intel or AMD, and though we've banged on this drum plenty of times in the past, we're frustrated to find that Corsair still doesn't include a spare tube of thermal paste. All you get is what's pre-applied to the bottom of the pump, so make sure your first mounting attempt is a good one; there's no second chance.

Elsewhere, there are a couple of subtle but important tweaks. The supplied 140mm fans are now full-range versions of Corsair's ML Series, enabling speeds of up to 2,000RPM (the previous-gen H115i Pro RGB topped out at 1,200RPM), and the brushed aluminium trim ring that featured on earlier Corsair pump heads has been replaced with a glossy black trim that is better suited to a wider range of setups. RGB lighting, of course, isn't entirely absent, with Corsair keeping the same 16-zone addressable setup as the Platinum series. 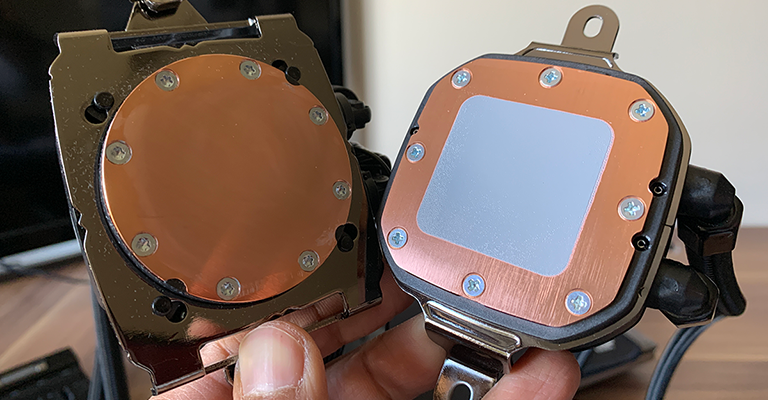 Competitive pricing, sleek styling and tweaks in all the right areas make the Pro XT one of the most-attractive AIO propositions to date, and though Corsair doesn't go into detail on the finer workings of its Asetek (above, left) and CoolIT (above, right) pumps, the octagonal contact plate of the latter appears a better fit for today's larger many-core chips such as the AMD Ryzen 9 3950X in our test platform.

It could even be argued that Corsair has made the change for that very reason. Out-the-box performance from the previous-generation Hydro Series H150i Pro RGB has been found wanting on the 16-core, 32-thread processor, and the pump and fans aren't the only alterations. Earlier Pro Series coolers were pre-configured to a Quiet profile that kept noise levels down to a minimum at the expense of overall performance; Pro XT coolers run a Balanced profile right out of the box. 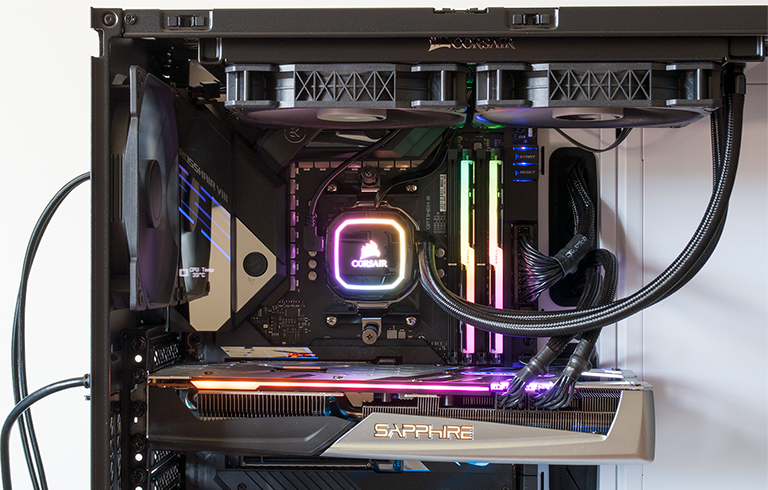 Supported sockets include the latest Intel 115x and 20xx, or AMD AM3, AM4 and TR4. On our AM4 platform, it's a case of slotting the mounting brackets onto the pump and fastening to the motherboard's retention modules using two thumbscrews. Emanating from the pump is a three-pin header for attaching to the motherboard's CPU/AIO fan port, a SATA power cable and a split four-pin cable used to drive both fans. An unsightly USB cable continues to jut out from the pump's left side (this thankfully can be removed if you shan't be using iCue), and when it comes to installing the radiator be prepared for a bit of a workout; the screw holes are so incredibly tight that you'll be ready for a tea break after installing the first fan.

We've been suitably impressed with the Noctua NH-D15 chromax.black air cooler in recent weeks, and there's a lot to be said for the simplicity of a traditional heatsink and fan, however the Corsair sure looks smart in situ and does a fine job of freeing up room around the CPU socket. Question is, can it deliver the performance to match?