It's easy to see why all-in-one liquid coolers have soared in popularity over the course of the past decade. Take your pick from dozens of models and you're practically guaranteed high-end performance, reduced clutter around the CPU socket, and a mounting kit that's so straightforward you could ask your gran to install it.

The latest revisions from ODMs have resulted in reduced noise levels and increased pump efficiency, and whichever brand you choose, the user experience tends to be familiar. Standing out in this segment isn't easy, but NZXT has managed to do just that with its latest 360mm effort, the Kraken Z73.

Built using Asetek's latest platform, the cooler includes a seventh-generation pump designed to be cooler and quieter than ever before, but the real talking point is the 60mm, 24-bit LCD display sitting on top. We've seen various manufacturers attempt to create trendy pump heads in recent years, and NZXT isn't the first to shoehorn a display into the top, but if the goal is to bring an element of wow factor to CPU cooling, we can unequivocally state that the Kraken Z73 is the sexiest effort to date.

NZXT calls the cooler "the centrepiece for every PC Build," and as far as aesthetics go, such a claim isn't outlandish. The circular pump head looks terrific in our test platform, and for those enthusiasts creating rigs designed to be seen, real-time and customisable metrics are both a major attraction and a key point of differentiation. That isn't to say the display is perfect, mind. Get right up close and you will notice that the 320x320 resolution results in some pixilation, while colour transitions aren't absolutely seamless, but from a couple of feet away it looks rather swish and plenty bright.

Black plastic housing ensures a sensible match for just about any style of build, and dimensions of 79mm x 79mm x 52mm are reasonably petite. It isn't the smallest pump head, yet it looks tidy in situ and those coming from a large air cooler will immediately feel the difference; concerns over DIMM slot or PCIe compatibility are non-existent.

Incorporating a display means customisation is of paramount importance, and NZXT, as expected, turns to its freely-available CAM software app. Display contents are altered using the Lighting tab and the drop-down list of options includes popular metrics such as CPU temperature, GPU temperature, clock frequency or a dual infographic, pictured below. 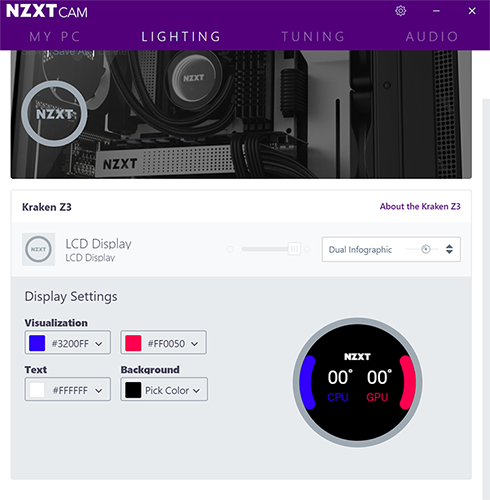 The number of presets is decent, the radial graphics work well with simple colour customisation, and if for whatever reason you've had to change the pump orientation, click the 'About the Kraken Z3' link to reveal a hidden option to rotate the display -90º. NZXT's dual infographic is our preferred preset, but if you're a tad more creative, there's also an option to upload a gif with a file size of up to 200MB. We've tried a couple of animations with excellent results, and it is a great way to put your own stamp on a self-built PC.

Plenty of good news, yet the CAM app isn't perfect. During our first round of testing, we found the readings on the LCD display would freeze under high CPU load. Fully uninstalling all app data and reinstalling the software appears to have solved the issue, however there's still a question mark over system resources, with CAM occupying almost 400MB of memory in our test platform. Call us old school, but we're of the opinion a CPU cooler ought not rely on software. If you're of the same line of thinking, Kraken Z73 will work without CAM installed, with the display showing coolant temperature in white text on black background.

We suspect NZXT is going to shift plenty of units solely due to the appeal of the eye-catching 60mm display, however there is a sizeable hurdle to overcome in the form of a whopping £250 price tag. Putting that number into perspective, NZXT's flagship CPU cooler costs almost 30 per cent more than a six-core, 12-thread Ryzen 5 3600X processor, and if it's extreme cooling you're after, a custom loop could easily be achieved for similar money. 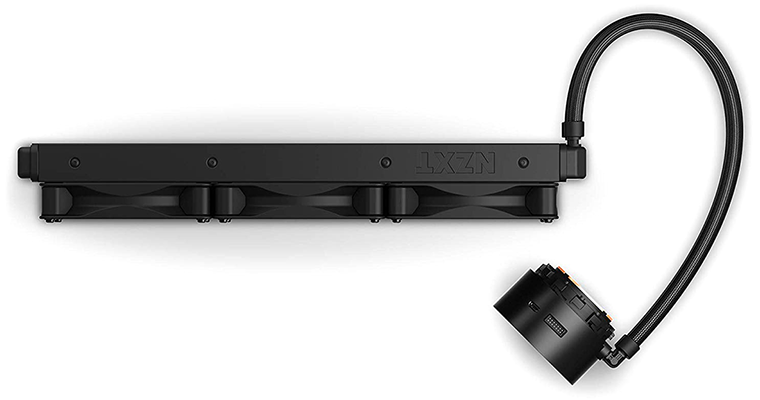 A smaller 280mm model, dubbed the Kraken Z63, lowers the price tag to £220, and if you can live without the LCD display, a new line of Kraken X-Series coolers is available priced from £120.

What else do you get with the range-topping Z73? Well, the pump is attached to a 394mm x 121mm x 27mm aluminium radiator via 400mm of sleeved rubber tubing, with flexible connectors at the pump end. A trio of four-pin Aer P120 fans is included as part of the bundle, as are two cables that attach to the top-side of the pump. The first is a micro-USB for connecting to a motherboard header, the second is a breakout cable with six connections; three-pin pump; SATA power; a trio of four-pin headers for the fans; and an NZXT RGB connector for powering other lighting accessories. 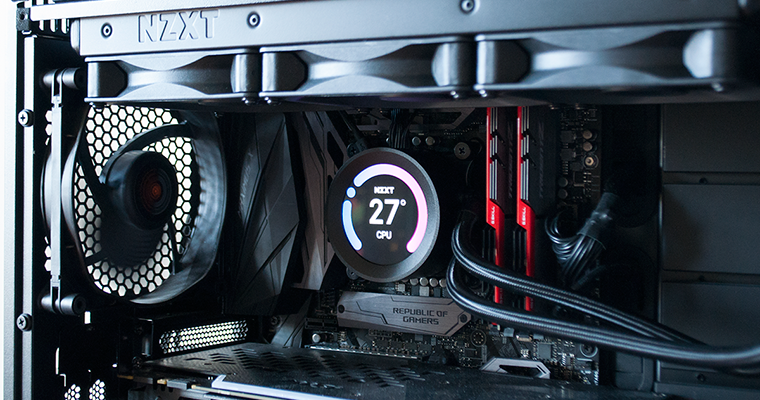 Mounting kits are supplied for all the latest Intel and AMD sockets, and Threadripper support is achieved using the mounting bracket provided in the CPU box. Getting up and running is a piece of cake. As with most closed-loop AIO coolers, it's a case of fitting a backplate using the relevant standoffs, and then securing the pump head with four thumb screws. Thermal paste is pre-applied, but given the price tag, we're shocked to find that there's no spare paste included in the box.

Still, it sure does look handsome, and NZXT provides extra peace of mind by issuing a six-year warranty as standard. The major question mark that remains is performance, so let's shift our attention to the benchmarks.