Our test platform has been refreshed for 2018 and now includes a hexa-core Intel Core i7-8700K processor overclocked using 1.225v to 4.8GHz across all cores. The 12-thread chip is paired to 32GB of dual-channel G.Skill Trident Z DDR4 memory set to run at 3,200MHz using the built-in XMP profile.

To get a feel for how the coolers compare, CPU temperature is logged while a large 4K video clip is encoded in multiple passes using the freeware HandBrake utility. The workload tasks all available threads for a prolonged period and, in order to provide a stabilised reading, we then calculate the average temperature across all cores from the last five minutes of encoding.

Actual CPU temperature is recorded and we also graph the delta temperature - that's CPU temperature minus ambient temperature. Last but not least, to give you an idea of cooler acoustics, we use a PCE-318 noise meter to measure overall system noise in both idle and load states.

Our be quiet! Dark Base 700 chassis is set to run with its two stock SilentWings 3 PWM fans - a 140mm front intake and a 140mm rear exhaust - both of which are set to low speed (setting 1) via the integrated fan hub. All CPU cooler fans are set to a 'silent' profile from within the Asus BIOS, and when testing liquid coolers the pump is connected to the motherboard's dedicated water-pump header.

When a radiator is used, it is installed in the roof or rear of the chassis and any bundled fans are configured to push air through the radiator and out of the enclosure. 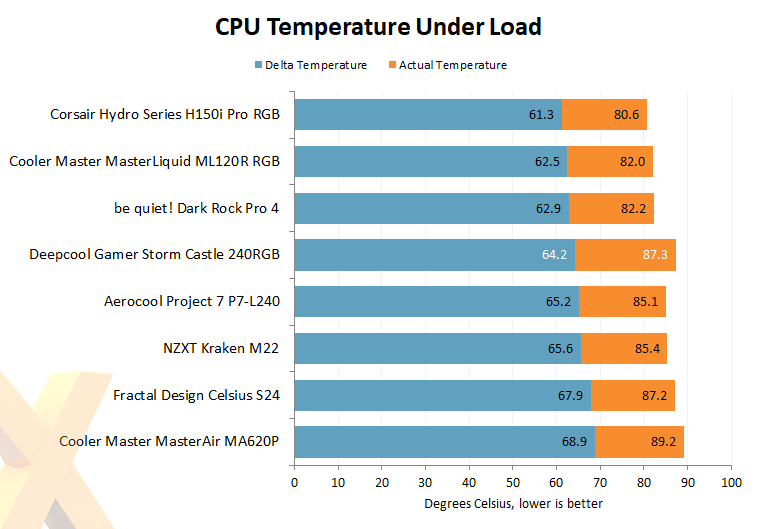 CPU cooler testing can be hindered by numerous variables, and though we strive to maintain consistency, even the UK gets the occasional heatwave. Deepcool's Gamer Storm Castle 240RGB was tested in hot and humid conditions, yet still performs well on our overclocked Core i7-8700K. 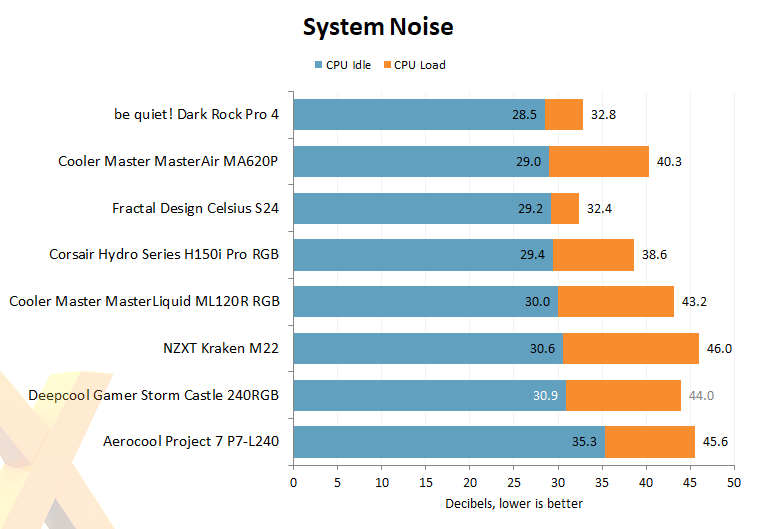 There isn't a great deal separating high-end coolers when it comes to performance, and we're of the opinion that other key metrics such as appearance, bundle and noise hold just as much sway. When it comes to noise, the very best coolers find an optimal balance between temperature and fan speed. Gamer Storm Castle 240RGB, on an admittedly hot day, is a tad more aggressive than most, resulting in a clearly audible system under full load. The pump, however, is nice and quiet, resulting in barely audible operation when idle.