Balancing cost when building a new PC can be a complicated process. Cutting corners in one area can have a knock-on effect, but in today's market it is relatively easy to put together a modern, high-performance machine while keeping to a three-digit outlay. If that's your budget, it makes sense to consider an affordable chassis; this is one component that won't necessarily hamper the rig's overall performance, and it is possible to get mod-cons such as USB-C and aRGB lighting for less than £100. 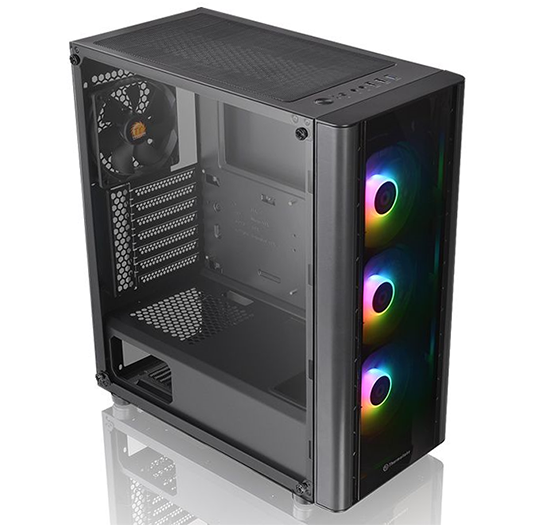 Can even better value be had further down the line? For those who favour addressable lighting and lots of fans, Thermaltake's V250 TG ARGB seems a solid bet at £70. At this end of the market, you don't expect a particularly attractive enclosure, but to be fair the Thermaltake is a decent-looking piece of kit. The curved front fascia, glass side panel and trio of RGB fans make it look more expensive than it is, and from a distance it could easily be mistaken for a pricier alternative.

The spec sheet reads favourably, too. There's support for a mini-, micro- or standard-ATX motherboard, seven expansion slots allow for graphics cards measuring up to 320mm in length, CPU coolers can stand up to 160mm tall, and you get a total of four drive bays; two 3.5in in a removable cage and two 2.5in sleds attached behind the motherboard tray. All the essentials for a potent PC.

A good amount of space above the motherboard afforded by somewhat tall and narrow 477mm (H) x 217mm (W) x 430mm (L) dimensions bodes well for liquid cooling, and with a full-length PSU shroud, creating an eye-catching build should be a piece of cake.

Cooling performance doesn't appear to be lacking, either. Right out of the box, the V250 TG ARGB comes equipped with three 120mm front intakes as well as a 120mm rear exhaust. The trio of intakes offer nine addressable LEDs apiece and connect to a SATA-powered daughterboard that can be routed to a single motherboard lighting header for customisation.

Thermaltake is clearly putting an emphasis on visuals, but the illuminated fans themselves aren't the most versatile; each is fixed to 1,000RPM and designed to be attached to the daughterboard via a proprietary connector that is incompatible with regular motherboard fan headers. The three-pin rear exhaust, meanwhile, connects via a regular three-pin jack and can be hooked-up to one available header on the daughterboard.

Want to add more cooling? The front of the case officially supports either the three 120s or two 140s, and there's room in the roof for two 120/140s. Offset rails make it easy for our 240mm liquid cooler to slot into place, though do be aware that filtering is basic. The top is lined with a magnetic mesh cover, there's a small sheet slotted into tabs beneath the power supply, and nothing behind the front panel. Speaking of which, the see-through central section of the front panel does a good job of disguising itself as glass, but is in fact plastic and we do wonder how much air will pass through the narrow gaps either side. 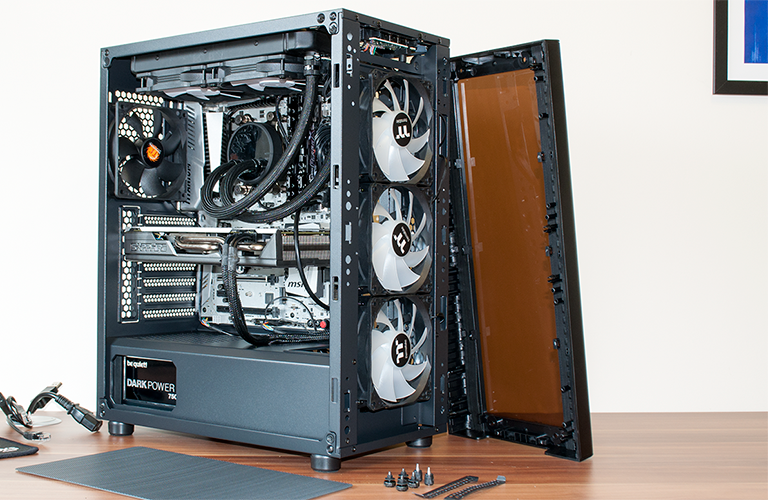 Unsurprisingly, it is when building into the case that some of the budget shortcomings become apparent, and there are little niggles throughout. The tempered glass side panel, for example, looks nice and is reasonably thick at 4mm, but floats on the side of the case rather than sitting on a ledge; be careful to hold onto it when undoing the four thumbscrews that keep it in place. We'd also prefer a black border to hide some of the steel frame's tooling - you can actually see all the wires emanating from the I/O panel - and we're surprised to see breakout covers on the PCIe slots. These aren't replaceable, and trying to wiggle one free reveals the thin nature of the steel frame, which can warp quite easily.

It is a shame all the supplied screws and fixing are lumped into a single bag, and that lack of attention to detail prevents the case from being enjoyable to build into. There aren't any rubber grommets on the routing holes, the expansion slots aren't manned by thumbscrews, and little shavings of metal on our desk following the test build suggest that overall build quality isn't great.

Connectivity tends to be a compromise in the sub-£100 sector, yet even so, the V250 TG ARGB's top I/O panel feels surprisingly frugal, with a pair of audio jacks, dual USB 2.0 and just the one USB 3.0. Granted, USB-C might be a stretch at this price point, but two USB 3.0 ought to be the minimum. Note, also, that the button labelled 'R' is by default attached to the lighting daughterboard and used to toggle effects; it can be repurposed as an actual reset button if you prefer. 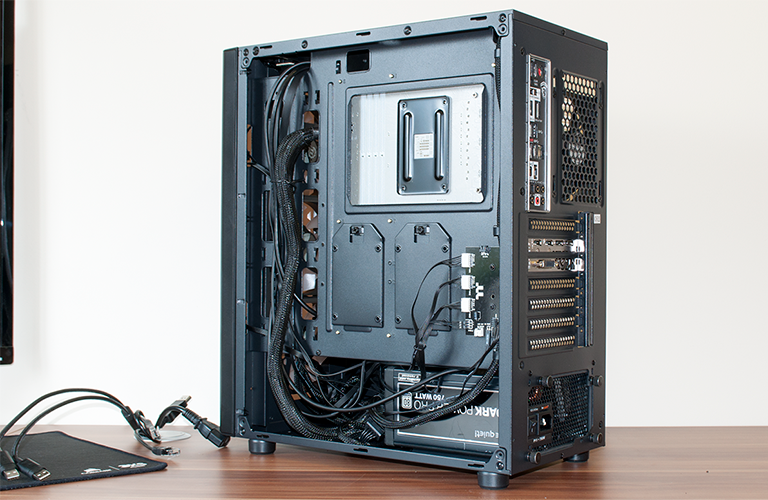 A quartet of fans, tempered glass and customisable aRGB lighting are key selling points, but in practise the budget Thermaltake solution ultimately lacks the quality of competitors at this price point. Let's run the benchmarks before passing judgement.